No, say two researchers. But their data is highly suspect.

Under former Governor Scott Walker, Wisconsin declined to expand Medicaid (called Badgercare in Wisconsin) to cover people who make up to 138 percent of the official poverty level. Instead, it removed people (mostly parents) who make more than 100 percent of the poverty level, to make room for those who made less than the poverty level but were disqualified because they didn’t have children. People losing Badgercare were encouraged to buy subsidized health insurance through the federal marketplace.

The result of this strategy is that Wisconsin is the only one of the states that turned down federal Medicaid money that does not have a coverage gap. In all the others, there are people whose incomes are too high to qualify for that state’s Medicaid, but too low (under the official poverty level) for the exchange). From the viewpoint of coverage, Wisconsin has acted more like a Medicaid expansion state than those refusing to expand, slipping only from 7th best in health coverage to 8th best between 2013 and 2017.

The major question, therefore, is whether the Wisconsin strategy makes fiscal sense. Because the federal government subsidizes expanded Medicaid at a much higher rate than regular Medicaid, the decision costs Wisconsin almost $200 million per year. Wisconsin’s new governor, Tony Evers, has proposed expanding Medicaid, to capture these funds. His proposal has not received enthusiastic support from Republicans who control the legislature.

Into this controversy comes a new analysis from two pro-Republican organizations, the Wisconsin Institute for Law and Liberty (WILL) and the Center for Research on the Wisconsin Economy (CROWE). The authors are Will Flanders of WILL and Noah Williams of Crowe. They argue that Medicaid expansion would cost Wisconsin taxpayers $600 million per year, despite the higher federal subsidy.

Their basic argument runs like this: Health care costs are lower in states that did not expand Medicaid. This is because payments to providers are lower under Medicaid than under private insurance. Providers in expansion states raised their rates on private insurance to make up for the loss on Medicaid. Thus, expanding Medicaid in Wisconsin would lead to higher costs.

Milwaukee Journal Sentinel reporter Guy Boulton responded with a story quoting various economists and health experts. The general tone was one of skepticism, as typified by the following quote:

“My real concern is they are trying to affect policy with such garbage work,” said Tim Classen, a professor of economics at Loyola University in Chicago.

Not surprisingly, Boulton’s article elicited an angry response from Flanders, the analysis’ co-author. Who is right?

The next graph compares the cost per capita of private insurance for two groups of states. The average for those states that chose to expand Medicaid by the end of 2014 is shown in blue and the average cost for states that chose not to expand (or which expanded after 2014) is in red. These numbers come from the Kaiser Family Foundation, which in turn uses data from the US Census. 2014 is the most recent year for which Census cost data are available. (The bureau analyzes several years together.) It is also the first in which major provisions of the Affordable Care Act took effect. 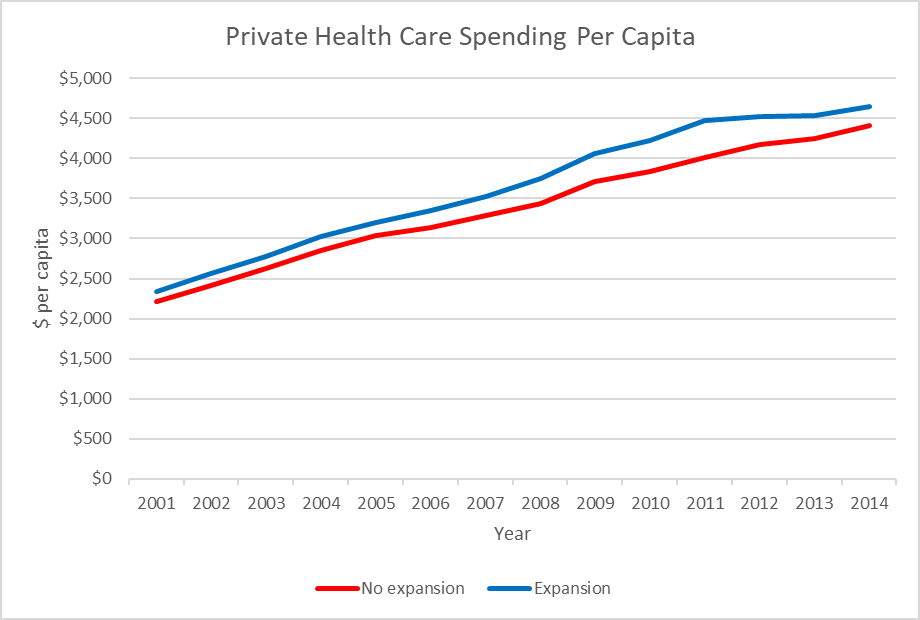 The cost per capita is indeed more on average in states that expanded Medicaid. However, that difference originated long before the Affordable Care Act and its Medicaid expansion was ever envisioned. It is hard to blame higher costs in 2001 on an expansion that occurred over a decade later. In fact, the data are consistent with the opposite proposition, that Medicaid expansion helped hold down costs in those states embracing it.

A look at the map below from the Kaiser Family Foundation suggests a more plausible cause for the cost difference. Even today, most of the non-expansion states are in the South, where costs including wages and housing tend to be lower than in the Northeast or Pacific coast states. The South also suffers higher rates of poverty than the rest of the nation, which may add pressure to hold down the prices of procedures. 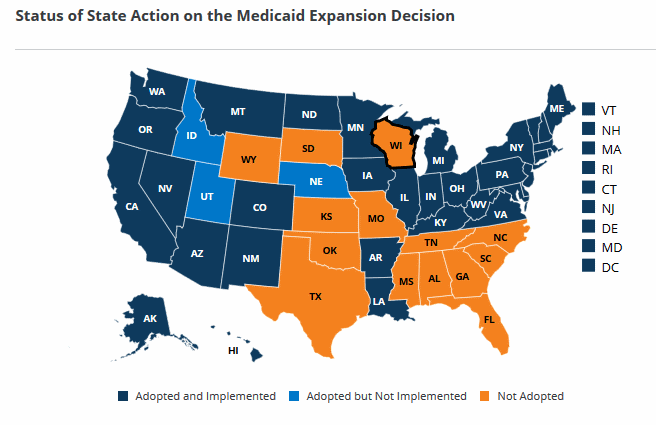 Status of State Action on the Medicaid Expansion Decision

The next chart compares the percentage change in private health care coverage per capita for the two groups of states: those expanding Medicaid by 2014, shown in blue, and the non-expanders, in red. In the five-year period between 2004 and 2009, costs grew more in the states that would eventually expand Medicaid than in those states that wouldn’t (or would defer expansion until later). 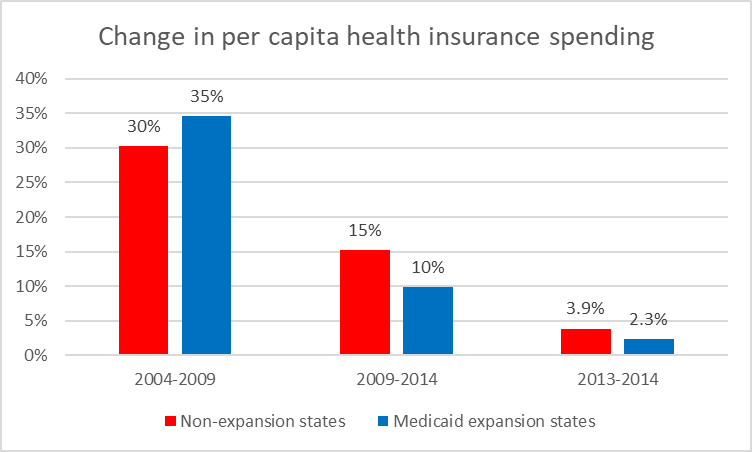 Thus, the data show the opposite of the Flanders/Williams claim. Rather than increased cost, in the years when states were choosing whether to expand Medicaid, those states choosing expansion enjoyed lower cost growth than those rejecting the expansion. Thus, if one accepts the Flanders/Williams assumption that any cost difference between the two groups is because one group decided to expand, the evidence points to one conclusion: that expanding Medicaid held down cost growth.

Flanders and Williams’ report illustrates the problem with advocacy research, research that sets out to prove a certain proposition and ignores alternative interpretations, and finds an eager audience of true believers, such as the Republican members of the Wisconsin legislature.

Though the two researchers did not respond to my request to share their data or supply links to them, I think I can explain where their research went wrong. But I should warn readers: this gets us into pretty technical territory.

Examining the Flanders and Williams Research

To understand where their research went wrong, it is necessary to look at their regression equation. Their description is vague, and as noted, they did not share their data, but I believe I understand their model in general terms.

Their regression model consists of six independent variables (such as state population and income). As with all regressions, there is one dependent variable, in this case each state’s average cost per capita for private insurance.

The authors state that they have 663 observations. Dividing 663 by 51 states (50 states plus the District of Columbia) gives 13 years. Using state data for the years 2002 to 2014 gives 663 observations. Regression models are sometimes “least square models” because their solution depends on finding the coefficients that minimize the total difference between the actual cost in each observation and the cost predicted by the independent variables.

One of the six independent variables is Medicaid Expansion. Presumably, this was a “dummy variable” that was set to zero each year a state had not expanded Medicaid and 1 in years when it had.

In about 50 of the 663 observations the dummy variable would have been set to 1 (about 29 in 2014 plus the 5 to 6 early expanders in years before 2014). In the other 610 or so observations would have been set to zero either because a state did not expand Medicaid or because the expansion came in a later year. The result would be to associate dummy variables of 1 with higher costs than those of zero, because states choosing to expand had higher costs initially and because all the ones would occur in later years after substantial cost inflation.

Thus, even if the decision to expand Medicaid had no effect on cost—or if it in fact reduced cost, which the data point to—it should not be surprising if the regression model solution, in minimizing the difference between actual and predicted costs assigns higher cost to expanding Medicaid.

I would be happy to revisit my conclusions should Flanders and Williams share their data with me. Meantime, their conclusions look like advocacy research meant to make Republican opponents of the ACA happy.

On April 19, the Center for Research on the Wisconsin Economy (CROWE) issued a second report on Medicaid expansion in Wisconsin. The authors, two members of the UW-Madison economics department, sharply disagreed with the conclusions of the first CROWE report. Although I was not aware of this second report when I wrote this column, its criticisms closely parallel mine. Their disagreement is summarized in the Abstract:

“This report estimates the costs and savings of the proposed Medicaid expansion in Wisconsin. First, we use data on health spending and insurance coverage to provide new estimates of the potential costs and savings of the Medicaid expansion in Wisconsin. We show that the Medicaid expansion could save nearly $100 million annually because of a reduction in uncompensated care costs, and that these savings exceed the costs to private insurers. Second, we re-evaluate the recent Flanders and Williams report (Flanders and Williams, 2019). Their analysis deviates from standard econometric practice in two key dimensions: failing to control for long-term time trends in health care costs and failing to adjust their expenditure data for inflation. Making either change to their analysis, we show that their results do not hold up, and controlling for state level trends and inflation shows a savings, not a cost, from the Medicaid expansion. We similarly find that their analysis of ER visits does not hold up after controlling for time trends.”

Will Sanders, co-author of the first CROWE report, asked that I include the following response:

“Once again, this study is misunderstood and unfairly maligned. The WILL/CROWE Medicaid study uses a fixed-effect linear model.  This means that the observations of a single state are not treated as independent of each other.  The chief concern expressed here is mitigated by that fact, as the higher cost of healthcare in expanding states prior to expansion is accounted for.  When it comes to issues of multicollinearity, diagnostic tests reveal that collinearity is at acceptable levels among all of the variables in the models.

“As for the recent UW Medicaid study, it also has issues.  I more fully address some of those concerns here.  In short, their assumption that only individuals who already have private insurance will generate new costs to healthcare system is not reasonable.  In their critique of my study, I would merely note that the most defensible of the two new models they present still shows a positive and significant effect of expansion on private healthcare costs.”