What Is The Future of Health Care?

Who’s gained the most from ACA and why Medicare for All could be a trap.

Following its passage—and particularly after its glitch-filled roll-out—the Affordable Care Act became deeply unpopular. The trick to its turnaround in public esteem seems to have been the election of Donald Trump, who seems intent on repealing the ACA without any clear vision of what, if anything, would replace it. The following plot shows the results of the Kaiser Family Foundation’s tracking poll since 2010, after passage of the ACA but before the implementation of its provisions. Since the spring of 2016, when its favorably rating was well below 40 percent, it has risen to as as high as a 54 percent favorable rating. 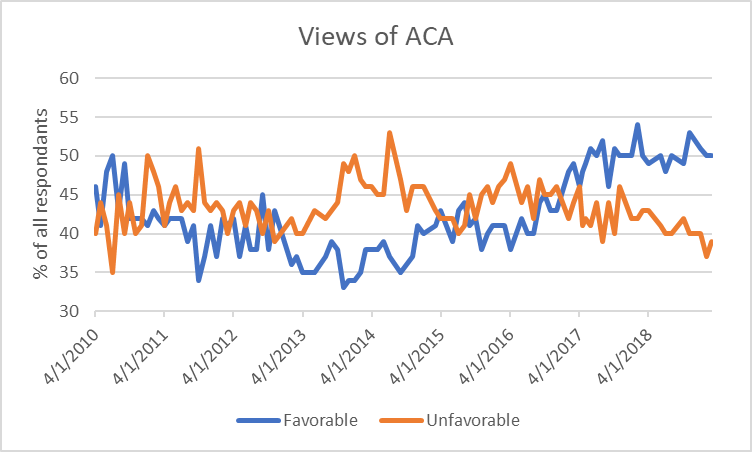 Views of the ACA

As the next graph shows, the improvement in the view of the ACA reflects greater favorability among Democrats (and, to a lesser extent, independents). Opinion among Republicans remains highly unfavorable to the ACA. 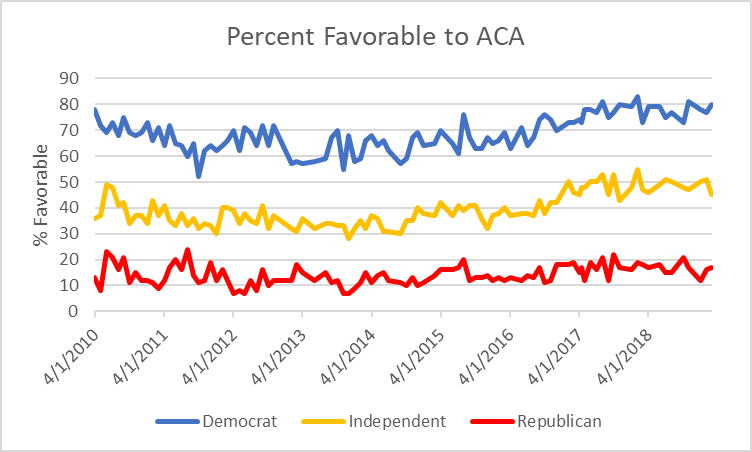 The next chart shows the percentage of people under age 65 without insurance by state in 2013 and 2017 based on the Kaiser Foundation’s analysis of US Census data. The right-hand side of each bar shows the uninsured in 2013, the last year before the ACA’s two major provisions—the expansion of Medicaid to cover everyone under 138 percent of the official poverty level and the introduction of the marketplace with its subsidies for those under 400 percent of the poverty level—took effect. The left side of the bars shows the percentage uninsured in 2017, the most recent year for which estimates are available. The decline in the percentage uninsured is shown in red if a state refused to expand Medicaid and blue if it did expand. 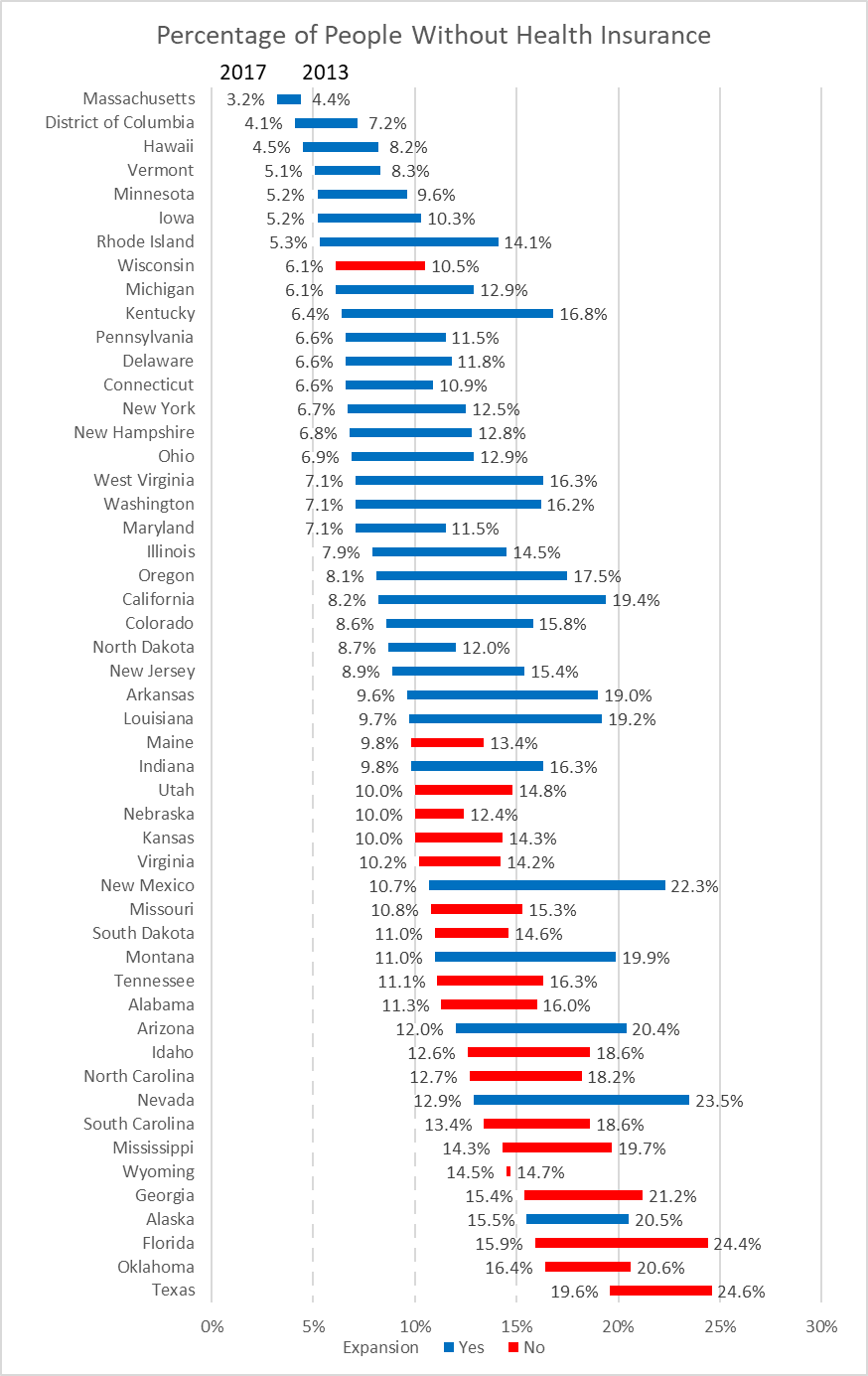 Percentage of People Without Health Insurance

The graph above tells several stories. One is that the number of people without insurance is heavily dependent on a state’s Medicaid expansion decision. With the exception of Wisconsin, all the states in the top half accepted the offered federal subsidy to expand Medicaid.

Before the ACA, one-quarter of Texans had no health insurance, the worst of any state. By 2017 the number without insurance had dropped to one-fifth of the state’s population, 3 percent worse than Oklahoma, the next worse state.

As the next chart shows, the worse a state’s pre-ACA record on insuring its residents, the more willing the state was to join the lawsuit to abolish the ACA’s coverage. The states suing to invalidate the ACA are shown in red, those intervening to protect the ACA in blue, and other states in green. For this chart, I removed Wisconsin from the plaintiffs. 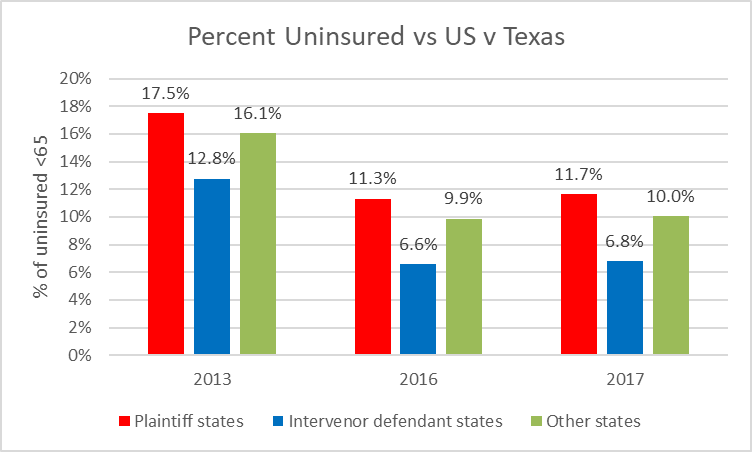 Note that all three groups of states experienced a slight uptick in the number of uninsured in 2017, the first year of the Trump administration. Yet, despite the administration’s efforts to sabotage the ACA, the proportion of people without insurance in 2017 was slightly more than half that in 2013.

The ACA’s effect on health-care costs has received less attention. After comparing national health plans in the Netherlands, Switzerland, Canada, Australia, Germany, Norway, and England, Commonwealth Fund concluded that in 2016, “the United States spent nearly twice as much as 10 high-income countries on medical care and performed less well on many population health outcomes.” It concluded that “health care utilization in the United States did not differ substantially from other high-income nations. Prices of labor and goods, including pharmaceuticals and devices, and administrative costs appeared to be the main drivers of the differences in spending.”

How did the ACA affect this problem? To prepare its budget estimates, the Congressional Budget Office must estimate future Medicare and other costs. The next chart compares several of these estimates. The green line shows the estimate from 2006, during the Bush administration. It estimated that the cost per enrollee would exceed $14,000 by 2016. The next line is from 2010, after the ACA was passed but before it was implemented. Future costs were both lower and rising slower than under the earlier estimate. The final three lines show estimates after implementation of the ACA. Costs per enrollee are projected to hit $14,000 a decade later than the 2006 estimate predicted. 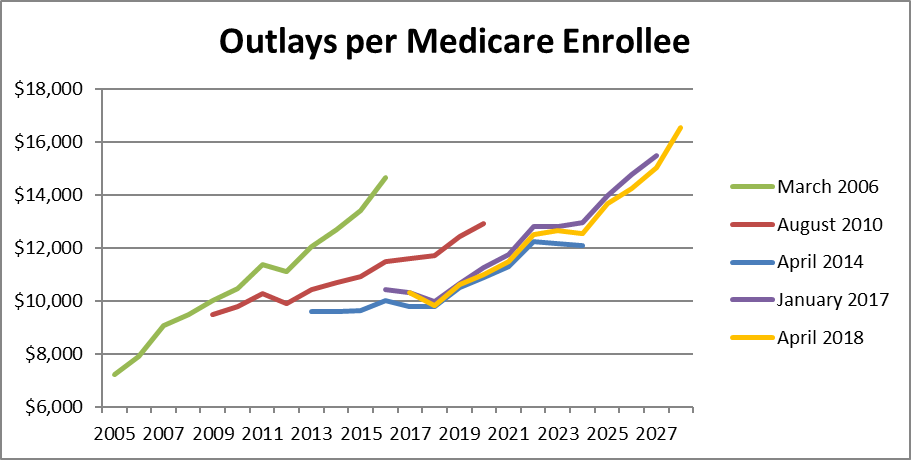 Thus, in many ways, the ACA is a great success. Yet in coverage and costs it still falls short of plans in most other advanced countries. What should be done next?

One possibility is a single payer system, “Medicare-for-All,” supported by much of the Democratic base several of the candidates. If this involves ending employer-provided insurance, as some supporters insist, it may represent a trap for the Democrats.

It should be remembered that the unpopularity of the ACA during much of the Obama administration was not solely due to website glitches. Another factor was the promise that “if you like your plan, you can keep it.” It turned out that a lot of people liked the plans that the ACA banned. While the benefits were often lousy, the premiums were low.

As the graph below demonstrates, employer-paid insurance has enjoyed a recent small uptick in enrollment, approaching 59 percent of people under 65. In addition, the ACA itself helps assure that these are good plans. For instance, there can no longer be lifetime caps on coverage. 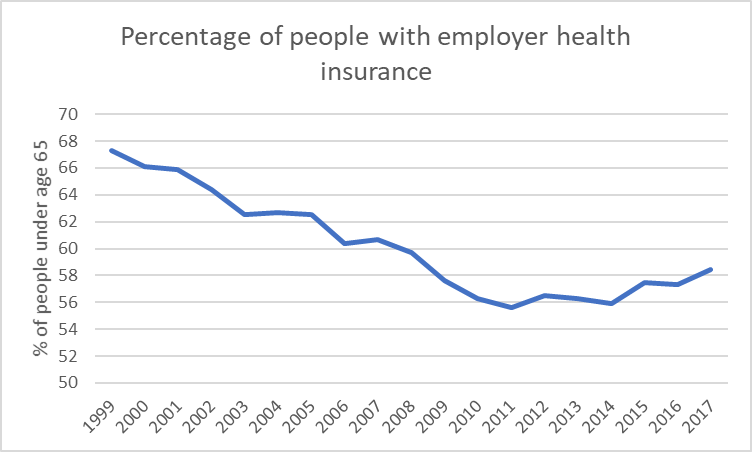 The 2018 election showed that protecting and expanding people’s access to health care insurance is a winning issue for Democrats. It is certainly helped along by Republican politicians’ strange fixation on taking away people’s insurance. However, Democrats risk losing their advantage if they allow Republicans to become the defenders of employer-based insurance.

2 thoughts on “Data Wonk: What Is The Future of Health Care?”