By Laurel White, Wisconsin Public Radio - Apr 19th, 2019 12:56 pm
Get a daily rundown of the top stories on Urban Milwaukee 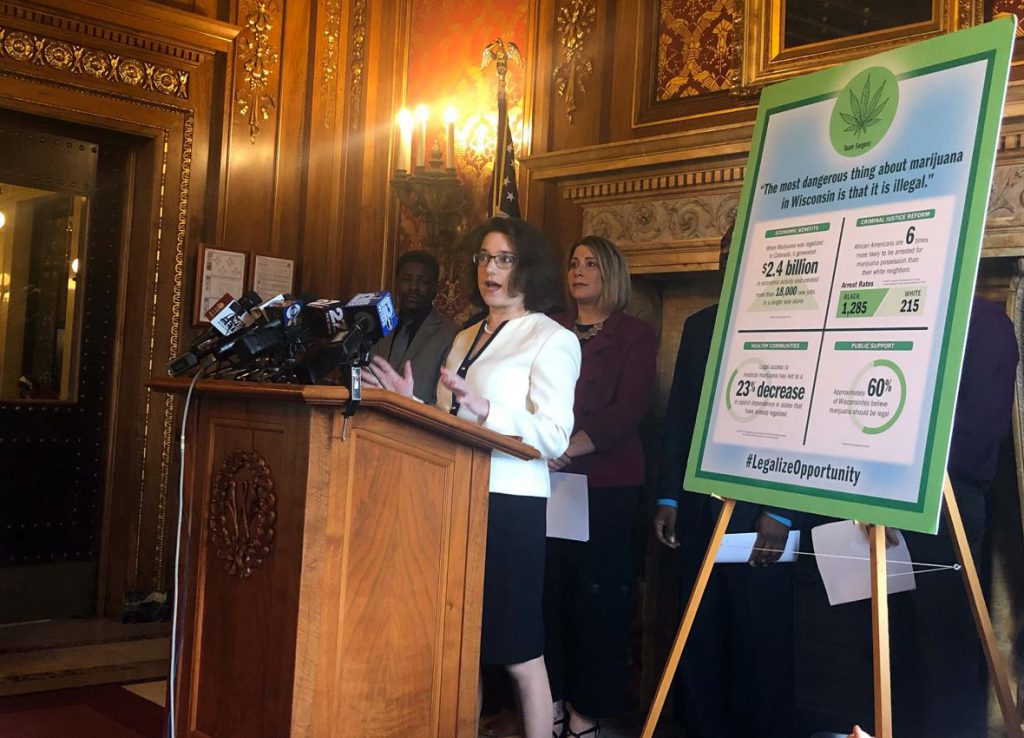 Rep. Melissa Sargent, D-Madison, spoke at the Capitol Thursday, April 18, 2019, about a bill she’s going to introduce that would legalize marijuana for recreational and medical use. Photo by Laurel White/WPR.

A push to fully legalize marijuana in Wisconsin was renewed Thursday at the Capitol.

Rep. Melissa Sargent, D-Madison, said she will introduce a bill that would legalize marijuana for recreational and medical use for the fourth time in her six years as a state lawmaker.

“It is far overdue that we listen to the voices of our constituents,” Sargent said. “The people of Wisconsin have said loud and clear that the prohibition of marijuana is not working.”

“The palate for legalization of cannabis in the state of Wisconsin is far more popular than probably the ratings for most politicians in this building,” Sargent said.

A number of advocates also spoke in support of the measure, including Josh Lowe, who said his daughter, Norah, would benefit from medical marijuana.

Norah Lowe has Rett syndrome, a neurological disorder that affects her ability to eat, speak and walk. Her father said CBD oil has been effective in her care, but others with her illness have benefited greatly from marijuana. He expressed frustration that state law prohibits her from trying it.

“If I told a diabetic they could extract insulin from a plant in their backyard, would you prevent them from doing that too?” Lowe said.

While Alan Robinson, executive director of the Wisconsin chapter of the National Organization for the Reform of Marijuana Laws, said “the most dangerous thing about cannabis in Wisconsin is that it is illegal.”

Advocates also argued that marijuana legalization would spur economic growth and give doctors an alternative to prescribing opioids.

The proposal is likely to face an uphill battle in the state Legislature, where the Republican leaders of the state Senate and Assembly have both consistently expressed opposition to full legalization.

In February, Gov. Tony Evers announced a proposal to legalize medical marijuana in the state.

Evers has indicated he would be open to full legalization.