Four of 36 trees were approved for this, but removal done before permit received. 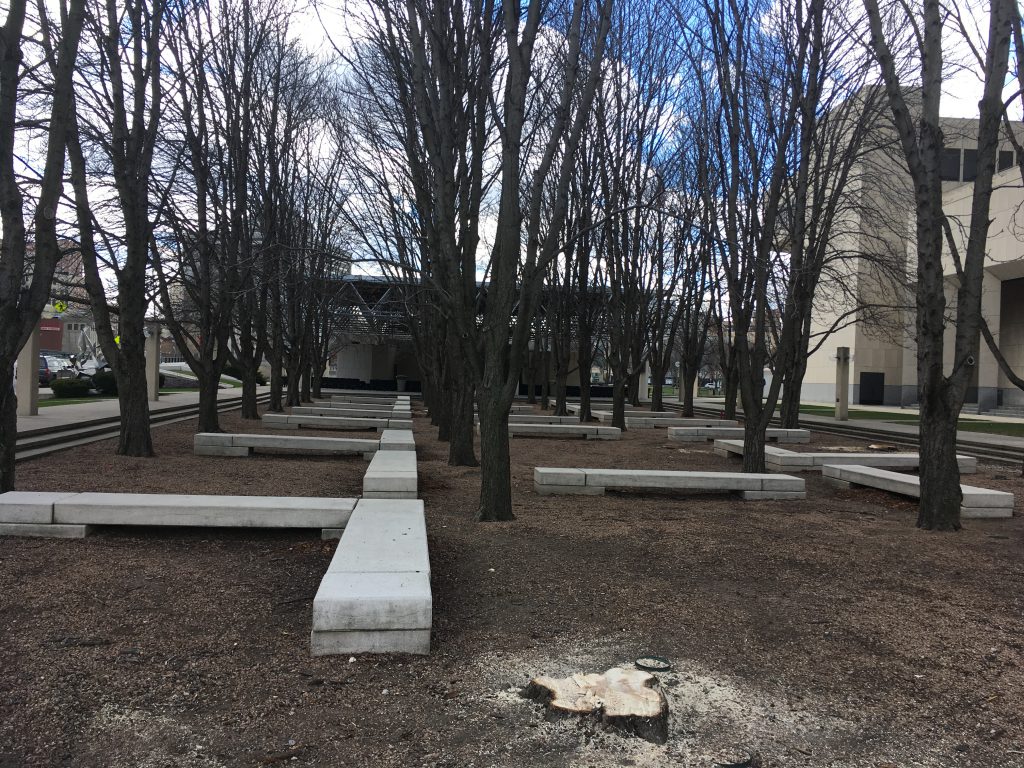 Removed tree at the Kiley Grove. Photo by Urban Milwaukee.

The Marcus Center for the Performing Arts has begun removing trees from the Dan Kiley-designed Horse Chestnut grove without the necessary permit according to city officials.

Following a lengthy Historic Preservation Commission hearing last week, the center was approved to remove four trees in poor condition. But a Certificate of Appropriateness had yet to be issued by the city’s historic preservation staff.

The Marcus Center is required to obtain a Certificate of Appropriateness because the building has been designated historic by the commission.

City historic preservation staffer Tim Askin told Urban Milwaukee that the city was preparing to issue the permit tomorrow. Terms of the approval required the Marcus Center to replace the trees within a year with new Horse Chestnut trees.

Marcus Center Heidi Lofy vice president told Urban Milwaukee that the center believed it had the necessary approvals. She cited a letter received via certified mail that indicates the center’s application to remove the four trees was approved.

Eliminating the trees based on that letter and before the certificate was issued sets up an unusual enforcement case. The commission regularly takes up properties that were illegally modified in historic districts, often the installation of vinyl windows, and orders corrective actions, such as replacement with wood windows. But with the trees being a living thing and the action in question having been approved, the city finds itself in unchartered territory.

UPDATE 5:40 p.m. April 9: Not long after this story was published, the city issued a Certificate of Appropriateness to the Marcus Center. “I appreciate the City Clerk jumping on it right away,” said Marcus Center vice president Dick Hecht.”This is just city bureaucracy. I don’t think they have had a living thing [such as a tree] to deal with before.” Hecht said the trees were scheduled to be removed a week ago following receipt of the letter from the city and a phone call to confirm.

“They assumed when they got the letter that it was the COA,” said City Clerk Jim Owczarski in an interview with Urban Milwaukee. “They admitted they did not know they were to wait for a COA.” The clerk noted that with the issuance of the COA, even though it came after the trees were removed, the work has been approved and executed within designated guidelines by the city’s preservation staff.

The 36-tree grove has become a hot topic following the release of a redevelopment plan from the center that would eliminate the grove in favor of an 18-tree lawn designed to unify the center’s outdoor campus. Advocates for the grove say it is an important piece of landscape architecture and a welcome place of respite in Downtown; opponents note the grove is not wheelchair-accessible, many of the trees are failing, and simply replacing some trees cannot recreate a grove with a perfectly uniform look.

Jennifer Current, landscape architect at Quorum Architects and Mark Debrauske, principal and architect at the Tredo Group, filed an application in January with the commission to have the entire complex at 929 N. Water St. historically designated. The commission approved that nomination last week and the Marcus Center has vowed to appeal the decision when it goes before the Common Council.

Current and Debrauske stressed the need for the development of a long-term maintenance plan. “The death of a tree doesn’t equate with the death of a design,” said Current of the organization’s insistence that the grove is in poor health and dangerous. “We are fine with cutting the trees down if they’re that decrepit and dangerous, but they would have to be replaced with the same trees,” said Debrauske.

The non-profit center, which leases the building from Milwaukee County, has surrounded the 36-tree grove with a chain-link fence in response to a center-commissioned study that shows four of the trees are failing. A city arborist confirmed that the trees are in poor shape, but disagrees with the center’s consultant on what could be done to make them safe in the short run.

Architect Jim Shields, who is leading the design of the redevelopment and previously served on the historic commission, has led the center’s opposition to the designation. Shields singled out two modifications to the building in his testimony last week that are key to his belief that the structure lacks historic integrity: the 1994 replacement of the failing marble facade with a mix of limestone and granite and the 1996 addition of a 40-foot deep lobby along N. Water St.

“I have no doubt that if this building still existed in some form as it did originally that it would easily meet your criteria,” concluded Shields. His presentation was a condensed version of one given in February concerning the building’s temporary historic designation.

The facility, designed by architect Harry Weese, was constructed in 1968. 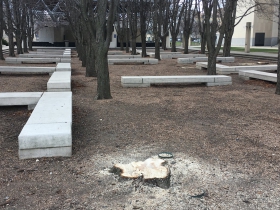 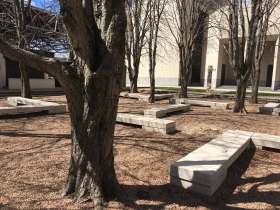 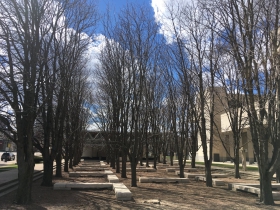