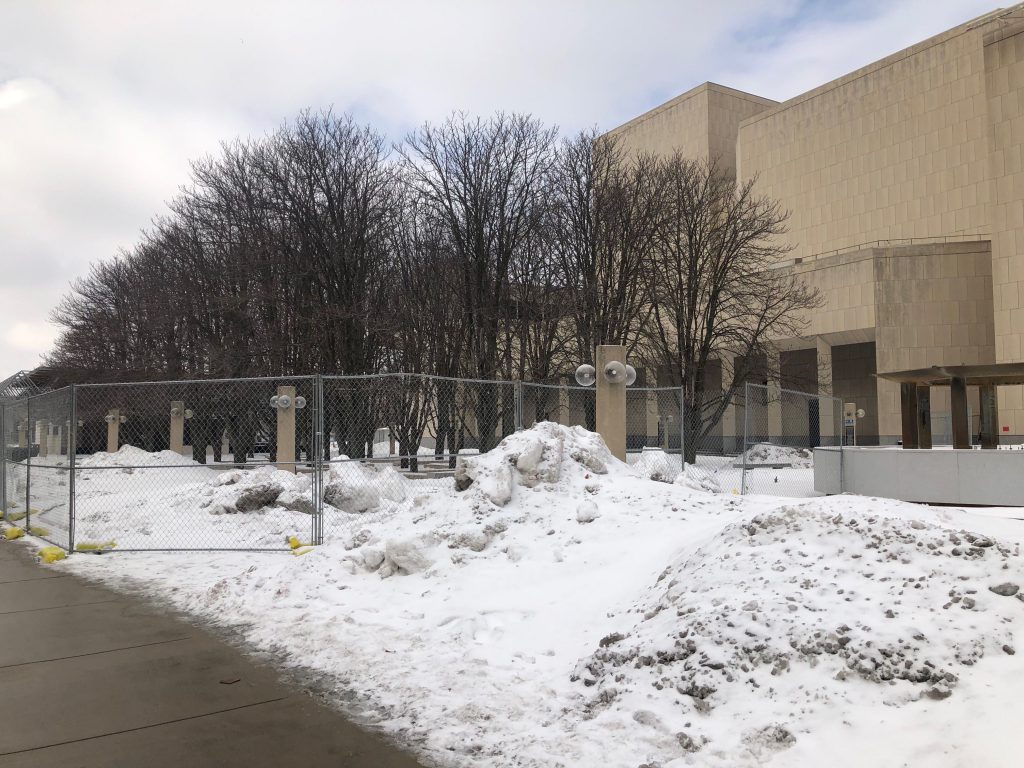 The Kiley grove at the Marcus Center for the Performing Arts. Photo taken February 27th, 2019 by Jeramey Jannene.

The fate of the Dan Kiley-designed chestnut grove remains in limbo until at least April 1st.

An application by the Marcus Center for the Performing Arts to remove four of 36 trees from the grove was held yesterday by the Historic Preservation Commission. The non-profit center, led by Paul Mathews, contends the trees are likely to fail and pose a safety risk. “I cannot make light of the public safety issue here,” said Mathews. The grove has been surrounded by a chainlink fence since February 21st.

The Marcus Center’s arborist and the city’s forestry service manager both agree that something must be done, but differ on the details.

Cutting down a tree isn’t something that normally requires a permit, but the Marcus Center complex was designated temporarily historic in February and as such any exterior changes required a Certificate of Appropriateness. The nomination to designate the complex came about after the Marcus Center announced plans to redesign the grounds, including removing the grove, and make a series of changes to the building itself.

A February report from Hoppe Tree Service, commissioned by the Marcus Center, found that nine of the trees in the grove are in poor or very poor condition. Arborist Fred Hoppe told the commission that the four trees in “very poor” condition have the highest potential to fail (or fall over) in the coming year. He walked the commission through a series of photos showing cracks, dead branches and trunk cavities. His report says failure of the four trees is “probable” over the next year.

“I can’t render an opinion on the health of these trees,” said Alderman Robert Bauman, who represents the council on the historic commission. But Bauman, an attorney, could undertake a lengthy line of questioning.

“Why of this all of the sudden an emergency?” asked the alderman. Marcus Center vice president of infrastructure Dick Hecht told the commission that the firm hired Hoppe to examine the trees for potential reuse of the wood after deciding to replace the 36-tree grove with 18 trees and a lawn. Hoppe did his initial assessment on January 31st, after the nomination for historic designation was submitted.

“We weren’t setting this up or making a game with it,” said Hecht in response to Bauman’s questions designed to ascertain a timeline and potential motive.

Hecht said the center has contracted with a number of firms over the trees 50 years of life to assist with maintenance of the trees. Hecht, who has been with the Marcus Center for decades, said two of the trees were struck by lightning in the 1980s and cabling was used to save them and others in the grove. “I actually picked up the phone and called Dan Kiley’s office and asked them what to do,” Hecht recalled.

The city had its own expert witness: Department of Public Works Forestry Services Manager David Sivyer. “Most of the trees I would concur are in fair condition. I would also concur that the structure of many of the trees is quite poor due to a lack of maintenance over the years,” said Sivyer. He suggested that bracing, the practice of placing a metal rod down the trunk, could be done for two of the trees, while two others were past salvage. “It will still create a dissymmetry from the grove. You will have trees that will be different,” said Sivyer.

“In summary, could there be some things to prolong and reduce the risk of these trees? Yes, it’s a judgment call,” concluded Sivyer. “The species has the ability to live 300 years, but not in that setting.”

Mathews concurs that the setting is an impediment to the tree’s health. “There was a design flaw when those trees were originally planted that contributes to their condition, not a lack of maintenance as some have alleged,” said Mathews. He has previously said that replacing trees with mature ones is not an option because the trees, which have to be heavily trimmed because of how close they are to each other, have root structures that are heavily intertwined.

Landscape architect Jennifer Current, who submitted the nomination for protection with architect Mark Debrauske, read a Milwaukee County guide to preservation and stressed that a plan for long-term care should be in place before any destruction. “The true losses occur when we do not plan and head straight for demolition or destruction,” said Current. In response to a question from commissioner Ann Pieper Eisenbrown, Current said the grove of trees could be replaced with another species that could be better maintained.

After over an hour of discussion, commissioner Sally Peltz said: “This whole thing has to do with keeping this thing or not keeping this thing. Let’s just call it what it is.” After even more debate, Mathews offered: “In the interest of moving that along, I suggest we move it to April 1st.” And so the commission did, holding the matter until it could be discussed alongside the permanent designation of the complex.

A hearing on the removal of the four trees and permanent designation of the complex is scheduled for April 1st at 3:00 p.m.

Should the commission designate the building as historic, Mathews already said his organization would appeal the decision to the Common Council. The council is able to consider economics and a host of other factors that the commission is unable to. Bauman, laying out a potential pathway for Mathews to get the redevelopment approved, suggested that the renderings and other details of the plan could sway his colleagues.

For more on the Marcus Center’s redevelopment plans, see our article from Monday. For a look at a discussion the historic merits of the center, see our article covering the hearing on the temporary designation.