By Laurel White, Wisconsin Public Radio - Apr 3rd, 2019 10:15 am
Get a daily rundown of the top stories on Urban Milwaukee

As of 6:30 a.m., Hagedorn was leading by less than 1 percent, according to unofficial results reported by The Associated Press. They were separated by 5,801 votes, out of more than 1.1 million cast.

Neubauer’s campaign ended its official event at around 11 p.m. Tuesday night, saying the race was too close to be decided on election night.

“The people of Wisconsin have spoken, and our margin of victory is insurmountable,” the statement said.

Wisconsin law allows for a recount if the margin of victory is less than one percent.

The judges, who both sit on the District 2 Court of Appeals, are vying for a 10-year term on the state’s highest court. The winner will replace longtime Justice Shirley Abrahamson, who announced last May she would retire after more than 40 years on the court.

Throughout their campaigns, both candidates vowed to serve as impartial justices on the court while pointing fingers at their opponent’s partisan affiliations and potential biases.

Neubauer has been the chief judge of the Wisconsin Court of Appeals since 2015. She was appointed to the court in 2007 by former Democratic Gov. Jim Doyle. Her daughter, Greta Neubauer, is a Democratic state representative from Racine. 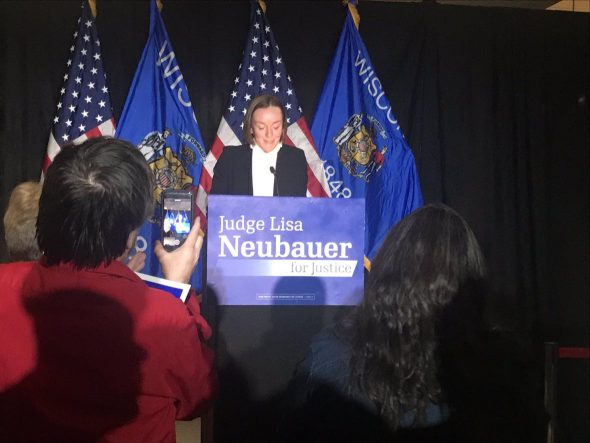 Hagedorn has strong ties to former Gov. Scott Walker, having served as the former governor’s chief legal counsel from 2011 until 2015 when Walker appointed him to an open seat on the Court of Appeals.

Hagedorn came under fire during the campaign for blog posts he wrote in 2005, when he was a law student at Northwestern University. The posts compared homosexuality to bestiality and called Planned Parenthood a “wicked organization.”

He was also criticized for his position on the board of directors and role in founding the Augustine Academy, a private Christian school in Delafield where the code of conduct prohibits teachers, students and parents from participating in homosexual activity.

Hagedorn received support from Americans for Prosperity. However, a number of prominent business groups stayed out of the race, including the Wisconsin Realtors Association, which pulled its endorsement after the blog posts surfaced.

A win from Neubauer would maintain the status quo, but set the stage for a winner-takes-all contest one year from now when Justice Daniel Kelly faces his first election. Kelly, who is part of the court’s conservative block, was appointed by Republican Gov. Scott Walker in 2016.

The winner will be sworn into a 10-year term after Abrahamson leaves the bench on July 31.

One thought on “Supreme Court Race Too Close to Call”