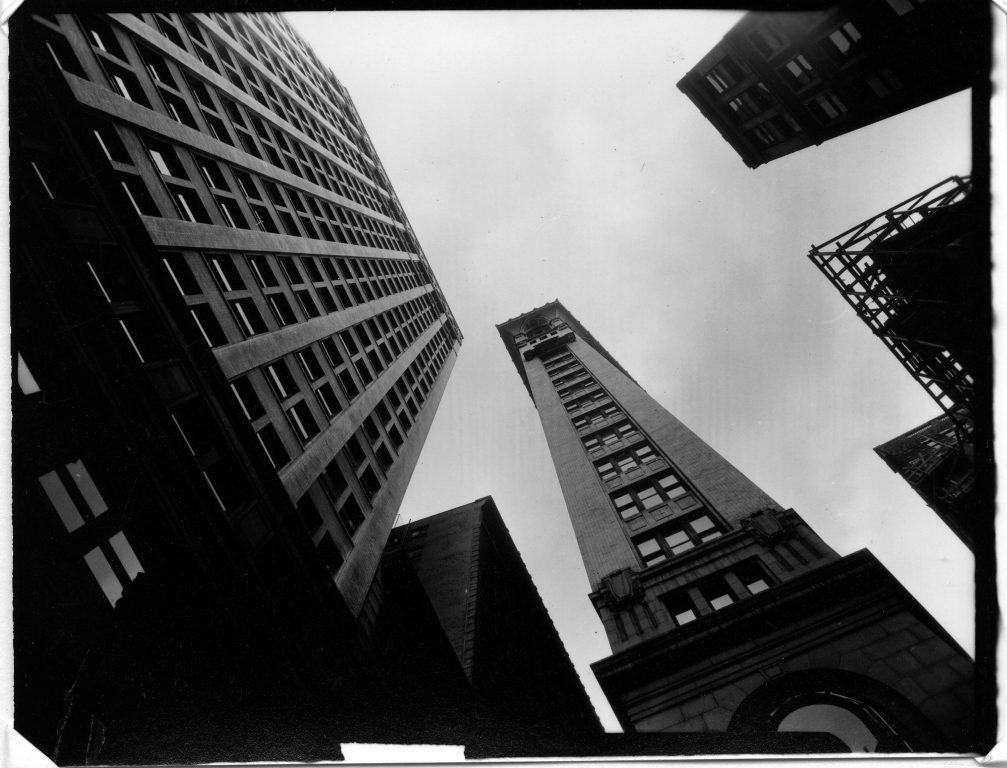 Photo by Ralph Steiner courtesy of the Haggerty Museum of Art.

The photographs of Ralph Steiner (1899-1986), many of them taken during the 1920s and 1930s, highlight the gritty grandeur and imposing architecture of an urban environment. His 1939 documentary film, The City, explores the possibility of a harmonious relationship between nature, humans, and machinery.

In its current exhibit The City, on display through May 19, the Haggerty Museum of Art presents the artist’s 31-minute film, which was shot in several locations, including New Jersey, Pittsburgh, and Manhattan, and scored by American composer Aaron Copland, along with a collection of Steiner’s photographs, all silver gelatin prints.

Although human figures are absent from most of Steiner’s work here (save for a few, in which the figures are photographed from great heights and appear only slightly bigger than dots, like 1922’s “Boy on Bike”), his photographs capture the ever-changing nature and constant activity of the Big Apple, then considered the world epicenter of capitalism.

Several of Steiner’s photos, among them “Five Towers Near Wall Street, (1924) and “Broadway and Broad Street” (1925), feature towering skyscrapers shot at an upward-tilting angle—dramatizing human achievement.

“Architectural Geometry” (1922) is a side shot of a mammoth rectangular building (perhaps housing business offices) with hundreds of precise rectangular windows, a handful of them alighted from within, while “Mid-Hudson Bridge” (1931) is a three-dimensional photo of the stunning bridge.

Steiner appears enamored with the shape, form and engineering of buildings, machinery and industrial and household objects, like the perfectly round typewriter keys in “Typewriter Keys” (1921-22) and the smooth paint and curved hubcaps of an automobile, pictured in “Ford (side) Saratoga” (1929).

Steiner’s subjects, combined with his skillful use of natural light, creates stunning shadows, like the crisp lines in “Park Avenue Garage/As If Alhambra” (1965). In “American Rural Baroque” (1929) a photograph taken in upstate New York, a porch rocking chair, with its elaborate circular patterns, casts a striking shadow against the wall.

The photographer contrasts the sprawling monoliths of Wall Street with small mom-and-pop businesses, which sometimes struggle to adapt to the times and compete in a capitalist economy. In “M. Franzese, Shoemaker” (1921) a display window of a cobbler’s shop reveals an establishment that appears dusty and forgotten, like an antique curiosity. Two lamps in the background softly illuminate a display table of shoes. Another photograph, “Vanderbilt Garage” (1924), a solid brick edifice with the business name boldly painted on it, appears to demonstrate the resiliency of certain small business owners and the independence of the American spirit.

Steiner seems to comment on the capricious, wasteful nature of consumerism and the entertainment industry in his photos “The Creaking Chair” (1923) and “One Talking Picture” (1929), where movie and theater posters adorn decrepit buildings surrounded by piles of trash.

The film The City, inspired by the writings of social critic, urban planner and author Lewis Mumford, contains several sequences, including In the Beginning, which portrays a New England town in the 18th century and The Industrial City, or Pittsburgh. The City premiered at the New York World’s Fair in 1939.

Steiner’s 1930s photos from the 1930’s, like “Brewery,” “High Tension Wires and Insulators,” and “Coconut Factory,” despite being taken during the Great Depression, suggest the constancy and progress (and, perhaps indifference) of industry and machinery. Though the United States was coping with an economic crisis and millions were suffering, machines soldiered on. 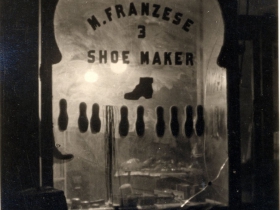 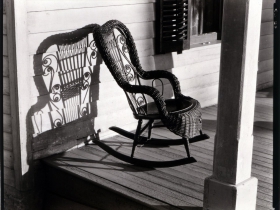 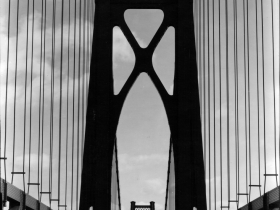 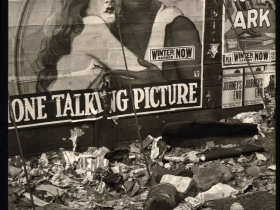 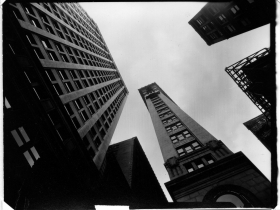 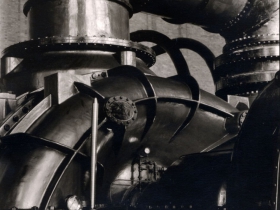