Ogden Multifamily Partners is advancing a plan for a five-story, 76-unit apartment building for a site at the intersection of N. Jackson St. and N. Water St.

The developer will present the plans, which require a zoning change, to area residents at a neighborhood meeting hosted by Alderman Nik Kovac on April 9th. Kovac, as a matter of practice, holds a public meeting in advance of a formal meeting at City Hall for any zoning change in his district.

The triangular site, which would be formed by merging five parcels together, is largely vacant land today. A 13,213-square-foot warehouse at 1659 N. Jackson St. would be demolished to make way for the development and three billboards will be removed from the site’s northern edge. The site slopes downhill to the west, as E. Brady St. becomes N. Water St. and bends towards the south.

“There probably isn’t a better undeveloped piece of land in the city for a multifamily building,” said Ogden principal Jason Pietsch in an interview.

Pietsch would know, Ogden’s headquarters is across the street and the firm has developed two buildings in recent years. It developed the Keystone on Brady apartment building at the street’s intersection with N. Humboldt Ave. and is putting the finishing touches on Nine10 at Land Place just north of E. Brady St. The developer, which plans to include 76 parking spaces in the building, would make overflow parking available in the surface parking lot across the street at its headquarters.

Kovac said the distinctiveness of the two streets creates a question for the developer and neighborhood. “Do we consider this Water Street or Jackson Street? Obviously, the answer is both,” said Kovac, answering his own question. He said the bluff presents the opportunity for the building to look smaller along N. Jackson St. and taller along N. Water St.

“We have put a lot of pressure on the previous four proposals to fit into Jackson Street,” said the alderman. “They all look different, but I think they all look respectful of their context.”

Ogden has experience on its side. The firm hired Striegel Agacki Studio to design the new building. Firm partner Joel Agacki designed three of the new buildings on N. Jackson St.: the Sage on Jackson, East Terrace and Avante apartment buildings. Each of those projects received a zoning variance from the city.

Pietsch has also hired Agacki to design a condominium project he’s working on outside of Ogden for a site on N. Arlington Pl. He told Urban Milwaukee a final cost estimate is being prepared for that project. 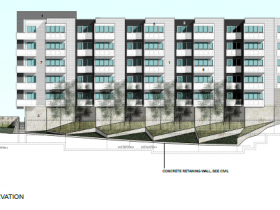 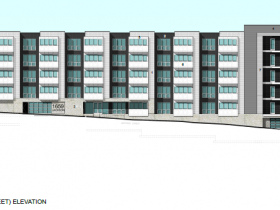 2 thoughts on “Eyes on Milwaukee: 76-Unit Apartment Complex for Jackson at Water”