Who Are Those Education Reformers?

Are conservatives or liberals pushing for charter schools?

The need for improvements in urban schools becomes clear from the results of the National Assessment of Educational Progress, which every two years rates the progress of 4th and 8th graders in reading and math, among other subjects. In the most recent assessment, 26 urban districts, including Milwaukee, were over-sampled, so that statistically-valid results could be reported for each. 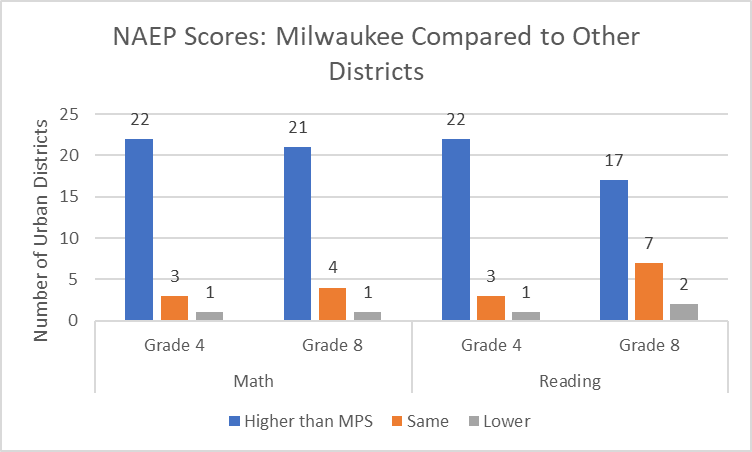 NAEP tests were first given in 2009 and reported by state. Starting in 2003, results were separately reported for several urban districts. MPS joined the urban districts reporting in 2009. It skipped testing in 2015 but rejoined in 2017. District participation is voluntary, but the number participating has been increasing. The map below shows the cities participating in 2017. (The arrows indicate that a city’s score of the 8th grade math test went up or down since 2009.) 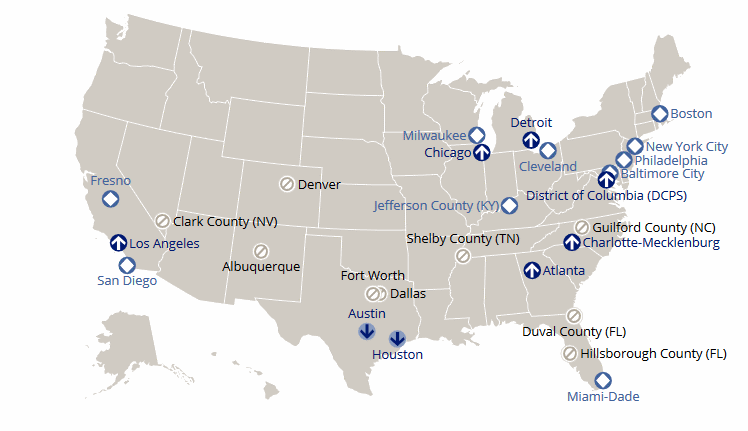 The next four graphs show how scores for the nation, the average city, and Milwaukee have changed since then. The first shows average scores for 4th grade math. 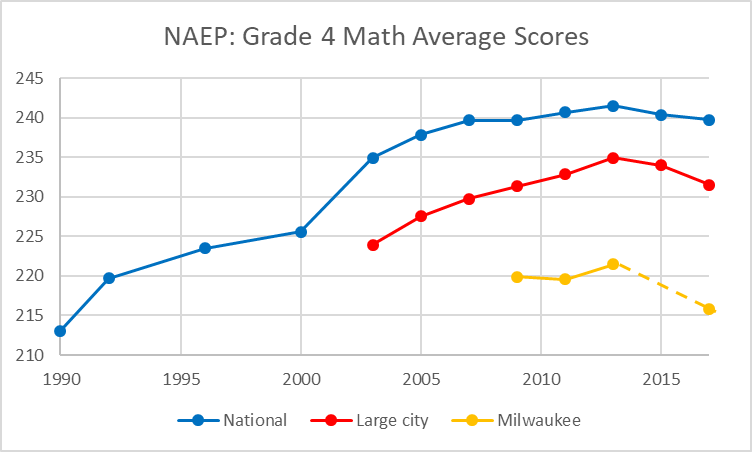 The next graph shows the averages on the 8th grade math test. As with the 4th grade math, the gap between other cities and Milwaukee has widened. 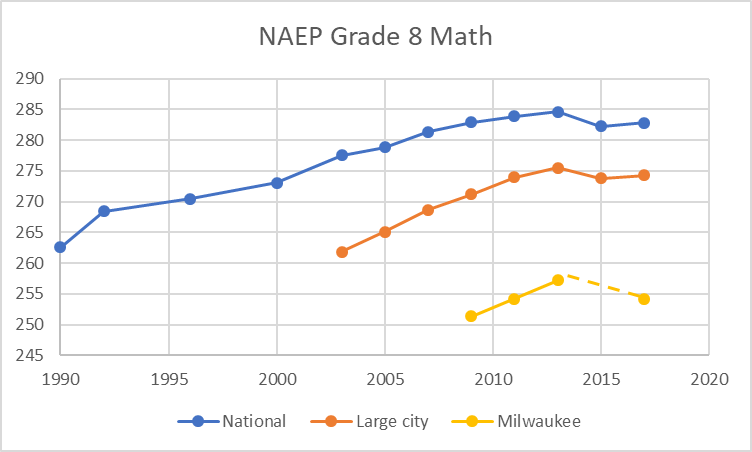 The next two graphs show average reading scores. As with math, the most recent 4th grade score, below shows a widening gap between MPS and other districts. 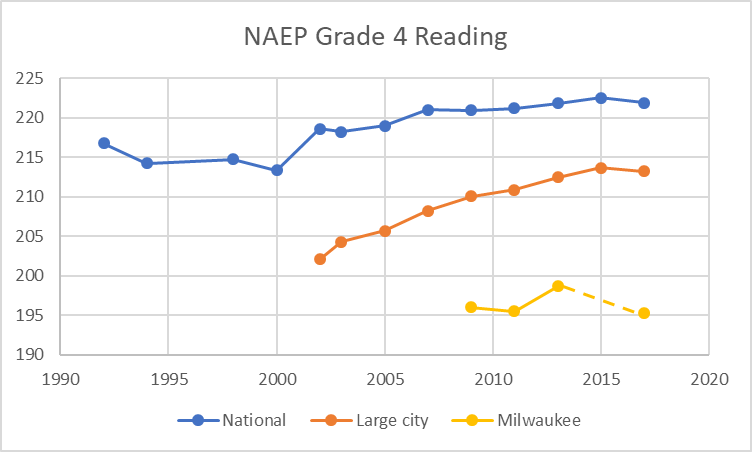 Finally, the following graph shows results for the 8th grade reading. In contrast to the other tests, MPS shows a slight uptick on the most recent exams—but still well behind most other districts. 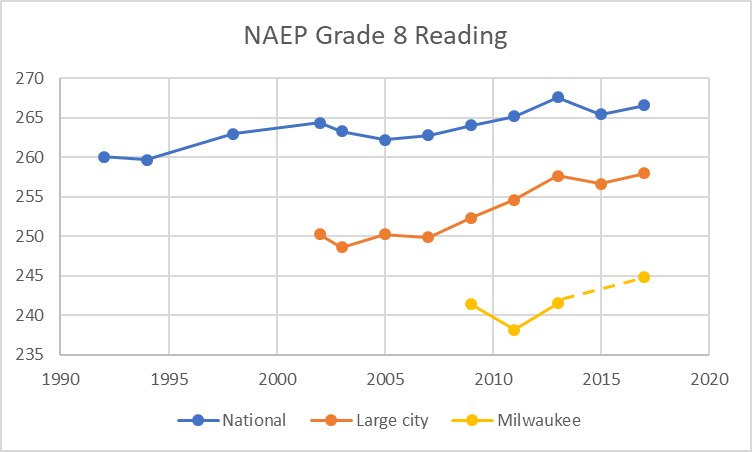 Within MPS, the two biggest gaps are between black and white students and between students qualifying for free or reduced lunch and those not qualifying, the standard measure of poverty in schools. The first gap has remained about the same since testing started in Milwaukee; the latter has widened by a statistically significant amount.

In defense of Milwaukee’s record, it should be noted that, depending on how one measures, Milwaukee often ranks at or near the bottom among urban areas in terms of poverty, especially among black children. This often leads to conclusion that there is little schools can do about the gaps until the happy day when poverty is eliminated.

If carried to its extreme, this argument makes education irrelevant (“It’s poverty, not teacher quality” as one commentator put it) to solving one of America’s gravest problems, the growth of inequality. In Milwaukee and elsewhere, some educators have recognized that a school that is perfectly satisfactory for middle class kids may not suffice for students in poverty and have taken advantage of the flexibility allowed by the charter school route to establish schools that have had greater success with this population.

Unfortunately, charter schools generate hostility from those committed to the status quo, such as teachers unions. The most common approach by those opposing educational reform is to describe it as a right-wing plot. Here is an image, reposted on the Milwaukee Teachers’ Education Association web site that summarizes the message: 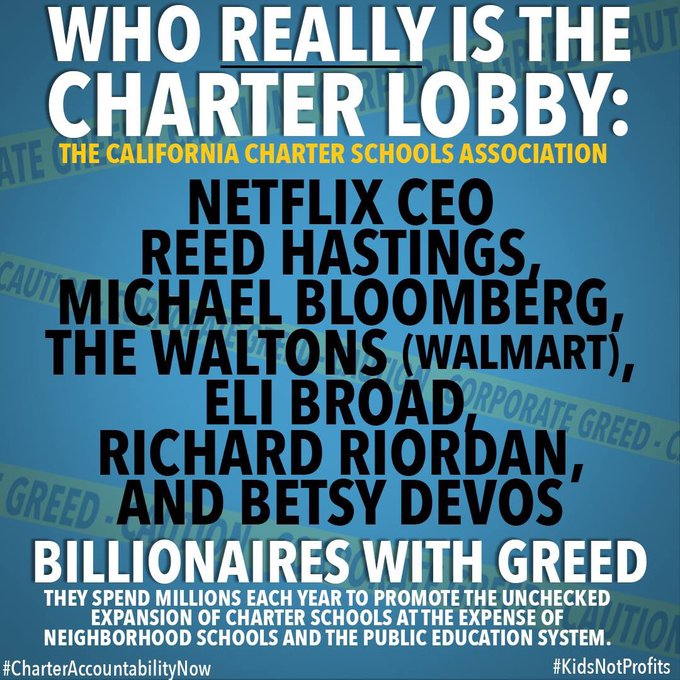 Who really is the charter lobby: The California Charter Schools Association.

“An open letter to new Teach for America Recruits” published in Milwaukee-based Rethinking Schools picks up this theme:

And please do not become a foot soldier for the corporate education reform movement. Do not partner with the very people trying to destroy public education

The magazine accompanied this with a section entitled “RESISTING TEACH FOR AMERICA.”

Diane Ravitch, formerly an advocate of choice in education and now a ubiquitous opponent writes in her blog:

With its free-market orientation, TFA has become a major political player on the right, especially on education issues, where they advance school choice and undermine teacher professionalism and unions. Their goal is to capture political power for the privatization agenda.

Last year, the Colorado Democratic convention voted to demand that Democrats for Education Reform, founded by former Journal Sentinel education reporter Joe Williams, stop using “Democrats” in its name. (How well the convention spoke for Democrats is indicated by the fact that the candidate for governor who was overwhelmingly rejected by the convention went on to win the Democratic primary and the election.)

This style of arguing, that charters should be opposed because they are supported by people we don’t like, is more common, I think, on the right than the left. Consider President Trump’s use of “socialism” to describe the “Green New Deal.” The strategy aims on shutting off any discussion on the merits of a proposal by associating it with people on the other side.

Thus, an Atlantic article condemns the highly popular Knowledge Is Power Program (or “KIPP”) charter schools as “engaged in the project of neoliberalizing public goods by introducing consumer choice as a form of subjecting the school system to a kind of market discipline.”

Is education reform dominated by Republicans and market-oriented conservatives, as the MTEA and other opponents would have it? A recent article in the journal Education Next looks at political contributions from employees of organizations receiving grants from the Gates and Walton foundations, organizations like Teach for America, KIPP, and Achieve, the force behind the Common Core academic standards.

For good measure, they also examined the presenters at the most recent conference of the Association for Education Finance and Policy (AEFP), the more charter-friendly organization for education researchers. The authors’ findings are summarized in the following graph. The percentage of contributions to Republicans are shown in red; those to Democrats in blue. 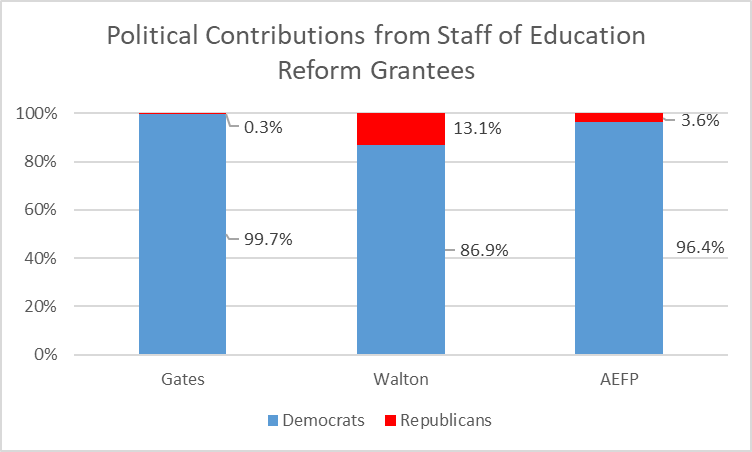 For good measure, the authors compare these results to several traditionally Democratic groups. Gates Foundation grantees, in particular, give a larger percentage of dollars to Democrats than do such traditionally-Democratic populations as Hollywood or public-sector unions, including the National Education Association.

Titling their article “Education reform’s deep blue hue,” the authors conclude that the danger for education reform is not that too many but too few conservatives are engaged. The claim that charter schools are a conservative plot is simply untrue.

3 thoughts on “Data Wonk: Who Are Those Education Reformers?”