The owners of AXE MKE (1924 E. Kenilworth Pl.) are expanding their reach in the area, this time adding another indoor activity.

Proprietors Marla and David Poytinger plan to bring a joint axe-throwing and floor shuffleboard concept, called NorthSouth Club, to Walker’s Point. The two have leased the space at 230 E. Pittsburgh Ave. Construction will begin at the end of March, aiming for an opening in late summer.

Marla Poytinger says that they have been interested in expanding outside of the East Side ever since AXE MKE opened last year. “The concept was a huge hit on the East Side and we were really excited about the energy.”

Poytinger says that in searching for a new location, they wanted an urban area so people could walk and have amenities nearby. She says that when they found the space in Walker’s Point, it fit the unique and local vibe they were searching for. “It was dynamite,” Poytinger says. “It checked all our boxes.” 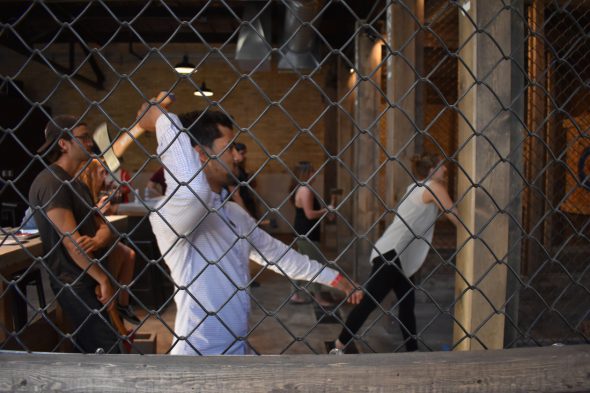 At 12,000 square feet, the facility is larger than the Poytingers were first looking for. The building spans the block between Water St. to the north and Pittsburgh Ave. to the south. A large wall originally split the building in two. While it has since been taken down, it served as the inspiration for the dual-concept approach. “We were envisioning that we were going to do an AXE MKE expansion and then another shuffleboard club somewhere else,” says Poytinger. “When we saw a building where we could do two in one, it really came together for us.”

So, why shuffleboard? Poytinger says they want to fill the space with another unique activity. Another indoor activity was preferred, as the goal of NorthSouth Club was to help provide entertainment for the city, especially in winter. The business also wanted something interactive to provide a break from screen-time and the use of computers and smart phones. Shuffleboard was chosen to join the mix because it’s something that is different while still being somewhat familiar. “We want to provide an experience for adults to come out and play,” says Poytinger. “There’s lots of places for kids to run around and be creative, but not for adults. We have a desire to fill that need in Milwaukee.”

Separated activities will coincide with matching themes. The axe-throwing portion will follow a cozy, “northern” theme while the shuffleboard club will have a beach-like, “southern” feel. The drink menus will be tailored to fit each experience, with two different menus to fit each side. Local beers and fun, interesting craft cocktails will compliment both themes. “At all of our venues, we try to make them experiential and immersive,” she says.

Following the format of AXE MKE, NorthSouth Club will forego a kitchen and will instead serve small snack items. The business will also partner with local restaurants and caterers for food options for private events. Poytinger says the lack of cooked food prevents them from being a competitor to nearby businesses. “We want to be an asset to the community and share customers,” she says.

NorthSouth Club will be open daily except for Tuesdays, which will be reserved for training, team building and building maintenance. Exact hours have not been decided but Poytinger expects the business will be closed by 11 p.m. on weeknights and midnight on weekends. Again, the hours are meant to help the neighborhood rather than harm it. “We’re open to inviting people to join neighboring restaurants and bars after that if they want to keep partying.”

NorthSouth Club will be operated by Bars & Recreation (a play on the TV show “Parks and Recreation”). The business group is owned by Marla and Dave Poytinger. Along with NorthSouth Club and AXE MKE, the group also operates Nine Below (1905 E. North Ave.) and Splash Studio (1815 E. Kenilworth Pl.).