By Tamarine Cornelius and Jon Peacock, Wisconsin Budget Project - Mar 7th, 2019 11:45 am
Get a daily rundown of the top stories on Urban Milwaukee 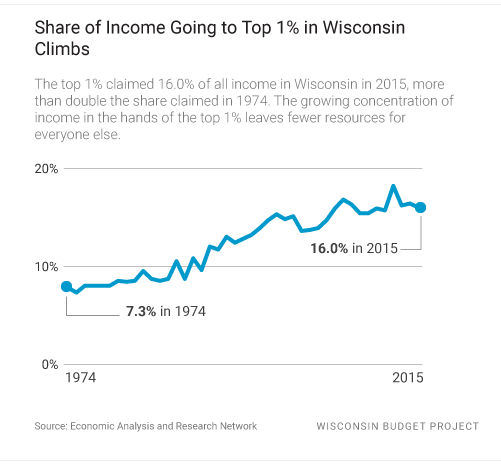 States can raise taxes on millionaires to build revenue for shared priorities without harming economic growth, a new report shows.

Eight states and Washington, D.C. have implemented some version of a millionaires’ tax in recent years, raising tax rates on the people who are taking an increasingly large share of all income. After raising top income rates, most of those states experienced economic and income growth that equaled or outpaced that of their neighbors.

In addition to helping fund critical services, the targeted tax rate increases were a response to the growing share of income that is taken by the very wealthiest. Concentration of income and wealth in fewer hands is a trend that can also be seen in Wisconsin. The share of all income going to the top 1 percent of Wisconsin residents – a group with an average income of nearly $1 million – has more than doubled in recent decades, to the point where $1 out of every $6 earned goes into the pockets of the top 1 percent. That trend makes it harder for everyone else to get ahead economically, and especially blocks opportunities for people of color: White families are three times more likely than Black and Latinx families to be in the top 1 percent of earners.

The states that have raised income taxes on the highest incomes have been able to generate substantial revenue for investments that boost a state’s future growth and productivity, without adversely affecting short-term economic growth. The report from the Center on Budget and Policy Priorities notes:

“Proposals to raise state income tax rates often spark contentious debate, with anti-tax activists and commentators predicting widespread economic harm. Yet the actual experience of the eight states that have adopted this approach over the past decade belies such claims.”

The review examined the record of states that raised income taxes on high incomes and found that after enacting the rate increase, most of the states:

State lawmakers in Wisconsin aren’t talking about implementing a millionaires’ tax, but they are talking about the possibility of curtailing a tax loophole that gives enormous tax breaks to the ultra-wealthy. Governor Tony Evers has proposed limiting the Manufacturing Credit, which nearly wipes out the requirement that manufacturers pay any income tax at all, and is highly skewed toward multi-millionaires. Governor Evers wants to use the proceeds from limiting the Manufacturing Credit to pay for part of the cost of a middle-class tax cut. He is also proposing curtailing a tax loophole that results in income derived from wealth and investments being taxed less than income earned from work.

Opponents of Governor Evers’ proposal say that requiring manufacturers to pay at least some income tax would slow the pace of job creation, but businesses can receive the Manufacturing Credit without creating any jobs. If we hope to close the large gap between Wisconsin’s modest rate of job growth and the national average, our state needs a smarter and more equitable tax code that builds accountability into the tax credits and subsidies for businesses and doesn’t skew them toward the wealthy and well-connected.

The real-world examples of states that implemented millionaires’ taxes point to the conclusion that states can thrive economically when they raise taxes on the wealthy who rig the system for their own benefit. Wisconsin, too, can prosper while requiring manufacturers to pay their fair share.