Which could make it difficult to fund more spending on schools, UW System and roads.

By Tamarine Cornelius, Wisconsin Budget Project - Feb 7th, 2019 12:12 pm
Get a daily rundown of the top stories on Urban Milwaukee

Over the next two years, Wisconsin is on track to hand out enormous amounts of public money in the form of tax breaks and cash subsidies to corporations and wealthy businesses owners. The potential diversion of more than a billion dollars in public revenue will make it harder for lawmakers to put together a budget that makes investments promised by Gov. Tony Evers and others in healthy and well-educated communities, public infrastructure, and working families.

Polls have shows that voters favor more spending on education, health care and roads, which raises the issue of where the revenue will come from. Evers has already talked about revisiting tax breaks, such as the Manufacturing and Agriculture Tax Credit.

In recent years, state lawmakers passed a collection of tax breaks that funnel money to big corporations and wealthy individuals. Those special tax breaks come with a huge price tag of up to $1.1 billion over the upcoming budget period. Handouts in the next two-year budget include:

An estimated $590 million loophole over two years that allows manufactures and some other businesses to pay nothing or next to nothing in the way of income taxes. Businesses do not have to create any jobs to receive the credit and can claim the Manufacturing Credit even if they are laying off workers or shipping jobs overseas. Most of the value of the credit goes to multi-millionaires.

Up to $469 million to Foxconn over the next two years. It’s hard to know what to make of the rapid-fire and contradictory news reports that Foxconn is downsizing its facility, abandoning the project altogether, or making no major changes to its plans to hire 13,000 workers. But one thing we do know is that there have been no changes in how the state must pay the subsidies to Foxconn: they take the form of checks sent to Foxconn, rather than a reduction in the company’s income taxes. As a manufacturer, Foxconn is already mostly exempt from paying income taxes in Wisconsin, so these subsidies are in addition to the loophole that gives manufacturers an advantage over similarly-situated businesses.

Foxconn missed its initial hiring targets by a wide margin, blocking it from claiming job-related credits for 2018. But starting in 2019, the amount of the subsidy Foxconn can receive is linked to the amount of money that Foxconn spends on buildings and equipment as well as to worker payroll. Even if Foxconn hires only a fraction of the workers specified in the contract, it can still potentially receive the full amount of the planned subsidy for capital investment if the Wisconsin Economic Development Corporation certifies that Foxconn is in compliance with the contract. 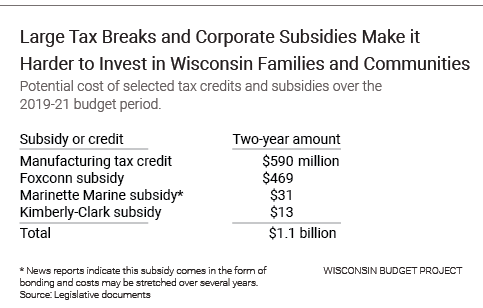 Large Tax Breaks and Corporate Subsidies Make it Harder to Invest in Wisconsin Families and Communities.

Up to $31 million for Marinette Marine in the form of bonding. Governor Evers announced that his budget proposal will include a subsidy to the shipbuilder to help compete for a federal shipbuilding contract and hire 400 new workers.

Up to $13 million to Kimberly-Clark over the next two years, to subsidize the operations of a profitable plant in Neenah and retain about 400 jobs.

The mounting price tag for corporate subsidies and special tax breaks will reduce the revenue that would be needed to make investments in families, schools, health care and roads. You can expect this to figure in the expected budget battle between the governor and the Republican-controlled Legislature.