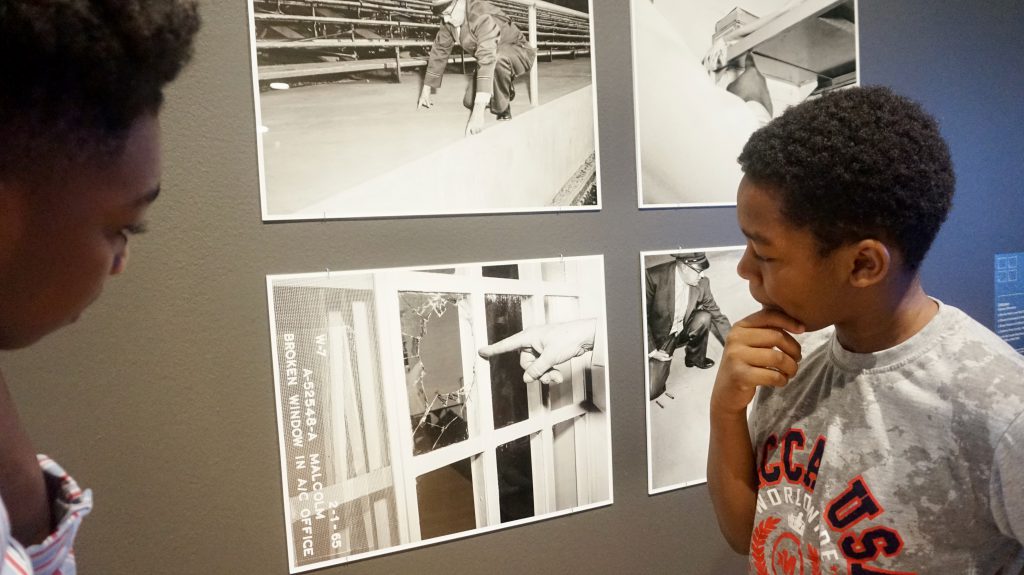 Lorenz Ambose, 12, (left) and Carmello Mitchell, 10, study a photo in the exhibit. Photo courtesy of NNS.

Fourteen-year-old Luis Ortiz surveyed the collection of photographs that hung on the Milwaukee Art Museum wall before choosing an image of two prison inmates in a vacant gym. “This one,” he said, pointing. “The eeriness of this photo tells me something went wrong.” As the Hope Caritas School student described what he thinks the photograph means, eight of his peers huddled around the image and listened intently.

Led by SOS founder Lance Ambrose and the art museum’s Senior Director of Education Brigid Globensky, the group discussed life in prison and how they can avoid it, as they stood in a circle with dozens of detailed photos of San Quentin prisoners surrounding them.

Ambrose, dressed in a light blue plaid suit jacket and sporting a contagious smile, encouraged the SOS members to express their personal opinions, questions and comments on each piece of art. “They were just lighting up,” he said. “To give them a voice, to let them know they can be heard; it was just a heartfelt experience.”

Ambrose said he got the idea for the nonprofit in 2017 when he saw a spike in the Milwaukee crime rate and felt he needed to try to change the future for his own sons and others. The organization welcomes boys in the Milwaukee area of all ages, schools and backgrounds, and offers a positive environment to go “through the hardships of life” with encouragement, support and love, said Ambrose.

“We want to tear down the misconceptions and stigmas that are prevalent in the Milwaukee community,” he said. Ambrose emphasized that he felt obligated to show the young boys that they have many options, despite what society may say.

According to University of Wisconsin-Milwaukee data, Wisconsin has the highest rate of incarceration of black men in the country, 10 times higher than their white counterparts. In Milwaukee County, more than half of all black men in their 30s and 40s have served time.

Ambrose said there is an immediate need to let men of all ages know that they don’t have to become a statistic. The San Quentin exhibit gave Ambrose, who was formerly incarcerated, an opportunity to share his observations about prison with the group.

Ambrose asked each boy to choose one photo and explain why he chose it, and what he thought the message was behind it. The students were eager to share their ideas, some even offering advice to the photo’s subjects.

Luis Ortiz said the message of the photo he chose is to “stray away from negativity and those bad roots that get you in trouble.” When asked how to avoid that negativity, he said he would “become a mentor and go into jails” to talk with those incarcerated.

The boys said they enjoyed the photo exercise. “You get to show people what you think about it all,” said Kynyel Pittman, 13. “Then you can have, like, a debate about the pictures you saw and come to agreement about what you think it means.”

Ambrose said he wants his organization to serve as “a lifeline and a long-term relationship” for the young men. His plans include more scheduled events and a summer program of camp days, field trips and fun activities.

One thought on “Art Museum Teaches Youth About Prison”