A Customer Service Model for MPS

The data shows what schools work and are more popular. Why not sell this?

Last week’s column asked whether Milwaukee Public Schools (MPS) could be fixed. One obstacle I see is that members of the school board and the groups that influence them don’t much like some of MPS’ schools.

An urban school system like MPS is charged with serving the needs of a variety of customers with a large spectrum of needs. In doing so, it needs to effectively manage a large variety of products—including schools and programs, such as those for students with special education needs.

Yet in the process, MPS ends up fighting its customers, its students and their parents, by refusing to give them what they want.

As with other large urban systems, MPS has a diverse group of constituencies. Depending on how it reacts, it can contribute to a healthy city—or undermine it. Consider two groups whose needs the school system needs to effectively respond to:

Schools that effectively address one of these issues are likely to draw customers—and generate hostility from the school board.

Consider the first issue: how do schools help their students break the cycle of poverty. Several schools chartered by MPS, including Milwaukee Excellence, Carmen, Milwaukee College Prep, and others appear to be showing success in this.

I recall attending a committee hearing to consider a proposal for Carmen to share space at Pulaski high school. There was overwhelming opposition from the Pulaski community, which seem to tacitly agree that the Carmen students would be far advanced over the Pulaski students. My impression was that very negative response alone would doom the proposal to failure.

Although I haven’t studied their success over time, it appears some regular MPS schools are also having success with this population.

Among the schools that effectively address the second issue—keeping the middle class in Milwaukee—are those with admissions requirements, including Reagan, King, and Golda Meir. The Montessori schools could also be included in this group, since there is an expectation that students entering the schools after kindergarten have prior Montessori experience.

The Maryland Montessori School, for instance, has led to a reversal of the downward trend of families with school-aged children in its East Side attendance area.

The next chart, based on Wisconsin’s school report cards, shows the percentage of the King, Meir, and Reagan students who are considered economically challenged. In every case it is more than half. 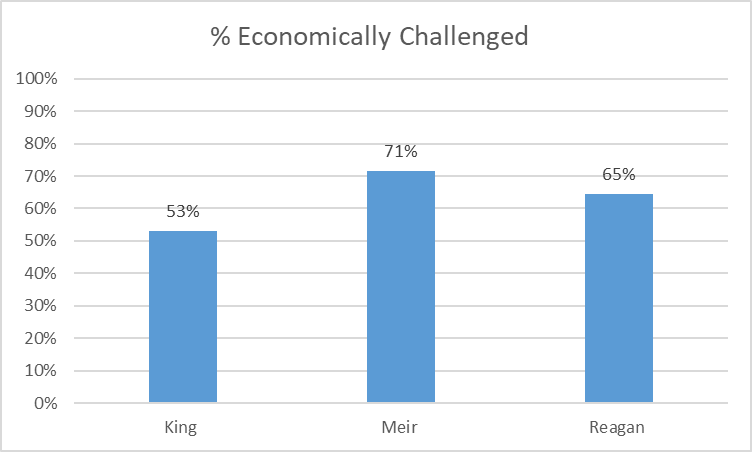 The next graph shows the ethnic mix at these three schools. White students (shown in yellow) are a distinct minority in each. Minority students (African American, shown in red, and Hispanic, in gray) are a majority in each school. 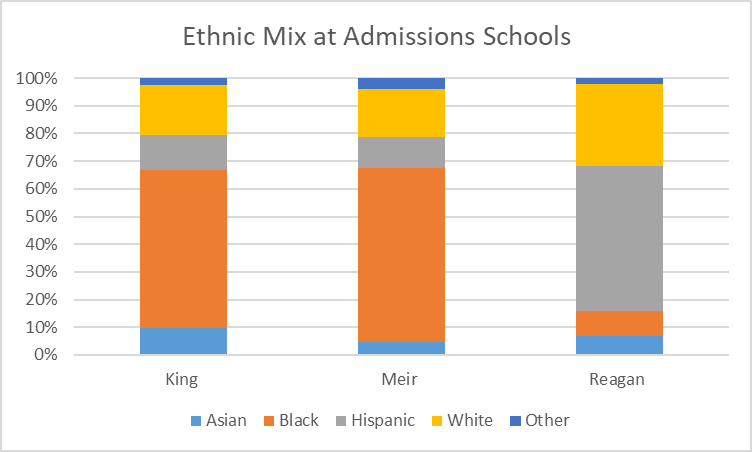 Yet thee are those who who want to end the ability of these schools to have admissions process, which would arguably punish mostly the academically ambitious black and Hispanic students whose families lack the financial resources that would allow them to buy a house in the north shore suburbs. I believe that such students should be cheered on, not singled out for punishment.

What are the causes of the hostility to the two groups of schools—charter schools aimed at the most disadvantaged students and schools with admission processes? It’s as if the management of a chain of stores was hostile to its most successful stores, threatening to take away their rights. One would expect, instead, that management would spend most of its energy trying to help the struggling stores, rather than hobbling those enjoying the most success. To the extent that management devoted energy to the successful ones, it would be aimed at understanding the reason behind their success.

While I find the reasons behind this hostility puzzling, some of it, I believe, stems from a theory of equity that says it is unfair for some schools (and children) to succeed while others fail. The solution is to narrow the gap, by hobbling the successful school.

A second theory of equity is that fairness means the same kind of school for all. In opposing a charter for the Milwaukee Excellence Charter School, one board member explained, “I wouldn’t send my child to that school.”

But the search for the school that will serve every student’s need is a recipe for failure. Why not instead celebrate and build on your successes?

One thought on “Data Wonk: A Customer Service Model for MPS”