Can MPS Be Fixed?

The school board seems opposed to any innovations that might fix struggling schools.

Models are useful things, but at some point, they need to be tested. At their best, models help organize seemingly chaotic information into an intelligible and coherent whole that suggests solutions to problems. Trouble starts when people start treating the model as divinely-inspired, immune to any sort of testing. At that point, any new evidence is rejected if it does not fit the model. Time and again, one underlying theme of these Data Wonk columns is about policy models whose adherents stubbornly resist any evidence to the contrary. For example:

Most of these models are associated with the right-wing side of the ideological spectrum. But when it comes to urban education in general and Milwaukee Public Schools in particular, most of the models that block the use of evidence have their roots in left-wing ideology.

If there is a single theme that runs through the Data Wonk columns, it is about the need to incorporate evidence into decision making. One reason that Milwaukee Public Schools is stuck is that it does not do this. Ironically that means that the organization with the prime responsibility for assuring that Milwaukee’s young people are learning is itself not a learning organization.

The Metropolitan Milwaukee Association of Commerce (MMAC) has converted the Department of Public Instruction’s spreadsheet of School Report Card data into an interactive map of Milwaukee area schools. The picture below is a screenshot of the map when it is restricted to regular MPS schools (no charter schools). 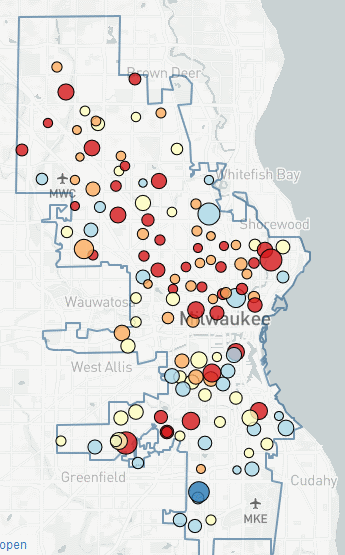 This observation leads to the question of priorities. Which schools—the blue or the red—should get the attention of the Milwaukee School Board? If you answered that the obvious answer is the red schools, the poorest performing, you would be out of sync with a number of school board members. After listening to board discussions, Alan Borsuk commented that he wondered why board members seemed to regard selective schools like King, Reagan and Golda Meir as problematic. “There still seems to be sentiment to treat high performing schools as problems.”

The next screenshot shows charter and choice schools in Milwaukee. While there are still schools that are struggling, the proportion of such schools is much lower than when MPS district schools are plotted. 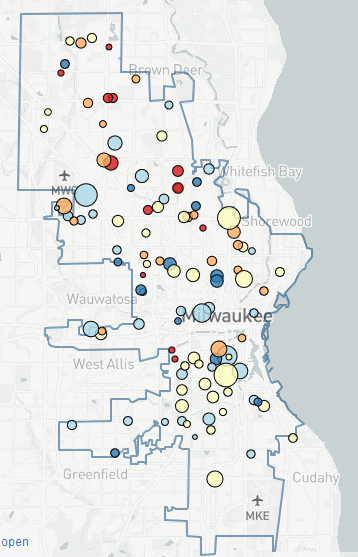 The Milwaukee school scene has evolved over the past few years and is likely to continue evolving. The most recent school report cards suggest a striking maturation in the Milwaukee Parental Choice Program. No longer is it dominated by the education amateurs of the early years, those who had no idea that managing a school requires business skills or who assumed that loving children was sufficient for success. Particularly notable are the large number of religiously-affiliated schools who serve a largely low income and minority population while scoring quite well on outcome.

Likewise, the charter school segment has grown. Particularly notable is the growth of several groups of schools which seem able to use their experience in one location to replicate their success when expanding.

MPS has a number of successful district schools: Golda Meir, most of the Montessori schools, selective high schools like Reagan and King, and language immersion schools. A number of these schools have been very valuable in keeping middle-class families in the city. Yet these are the schools that must endure continued hostility from some board members. When it comes to schools serving students at risk, the same board members seem content to leave innovation to the choice and charter communities.