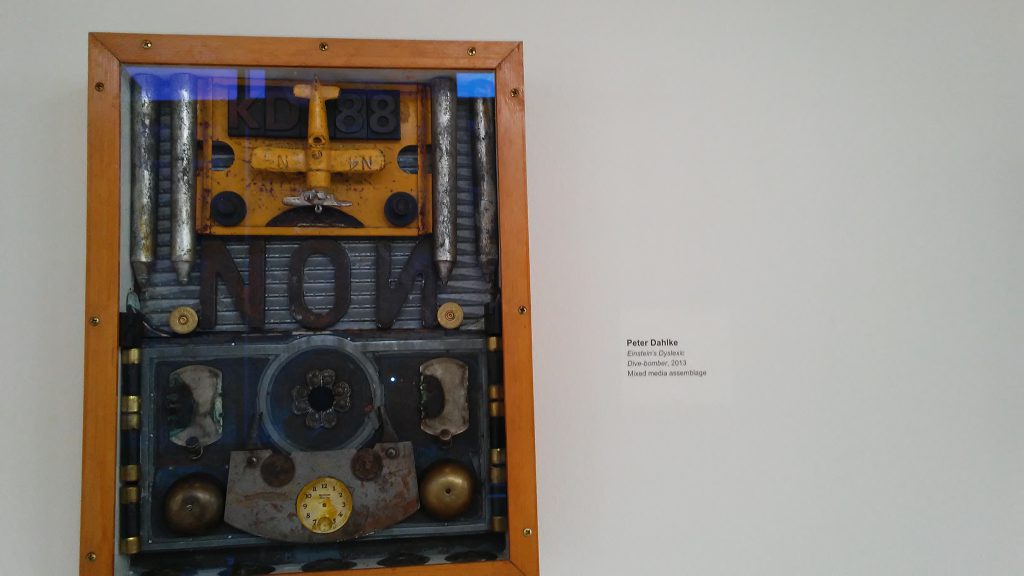 On display through April 16 at Saint John’s on the Lake retirement home (and Museum of Wisconsin Art satellite location) at 1800 N. Prospect Ave., Dream Spaces consists of nearly 30 of Dahlke’s works. They are encased in boxes made out of wood from pipe organs, with glass panes.

“My constructions usually begin with the box into which I add found objects, moving them around until something of visual interest begins to develop,” Dahlke said in a recent press release.

The artist, an octogenarian and lifelong Wisconsin resident (save for a three-year stint in the medical corps with the United States Army), incorporates objects in his work that reflect the Dairy State, namely cows, and pop culture from his childhood.

“I was born in Milwaukee in 1939. Ditto with Gone with the Wind and The Wizard of Oz,” Dahlke said.

In works like “Pearls Before Cow,” for example, a metal cutout of a cow and the shape of a cloud provides the backdrop for salt and pepper shakers filled with pearls. Dahlke also has a fondness for Mickey Mouse. Figures of the cartoon rodent (often surrounded by gears and other bits of metal machinery) receive center stage in several works, among them “Ellery’s Mouse” and “The Vetruvian Mouse.”

Family history is a common theme in Dream Spaces—one piece is even entitled “Ancestry + com.” The majority of Dahlke’s boxes feature late 19th and early 20th century portraits, in small photos and imprinted on wooden blocks and circles. Bits of documents in German, compasses, maps and train timetables suggest travel and immigration.

A former Milwaukee Public Schools art teacher who earned a bachelor’s degree in art education and a master’s degree in fine art from UW-Milwaukee, Dahlke clearly has an appreciation for literature and art history. Two pieces, titled “Nevermore” and “Ibsen’s House,” reference the writings of Edgar Allen Poe and Henrik Ibsen with an artificial raven and a doll’s head and torso amidst a collection of other objects, among them a map, a ruler, and an old-fashioned bingo game.

“A Bit of Bosch” is a nod to Dutch early Renaissance painter Hieronymus Bosch, known for his elaborate fantasy and religious works like “The Garden of Earthly Delights” and “Adoration of the Magi.”

The titles of several of Dahlke’s pieces, such as “Einstein’s Dyslexic Dive-bomber” and “A Numerican Expression” are rich in wordplay and subtly humorous, perhaps reflective of the artist himself.

Dahlke also appears to be fascinated with the natural world, numbers, measurements, metaphysics and religion, and celestial bodies. Rulers, wooden numbers and Roman numerals are present in a number of works. Models of hands used as palmistry guides, a crucifix, and astrological charts mingle with cast iron frogs, preserved insects, rusty rhinoceros shapes and pictures of different moon phases. The artist also appreciates the macabre. Images of human skulls and molds of teeth (and possibly actual teeth) figure in several pieces.

Like his mentor Cornell (1903-1972) known for his eccentric shadow box displays, Dahlke encourages his audience to use their imagination while viewing his careful arrangements of unrelated, yet nostalgic, objects.

Dahlke has been involved in the Milwaukee arts scene for many years. A member of the Wisconsin Visual Artists and Milwaukee Area Teachers of Art organizations, the artist still enjoys exhibiting his work at area venues.

“There is life after retirement,” he joked. 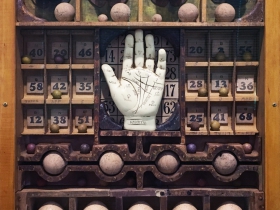 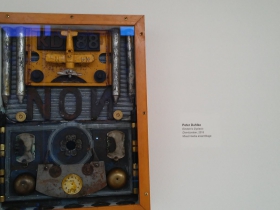 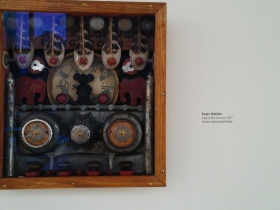 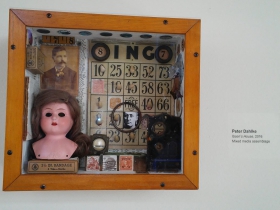 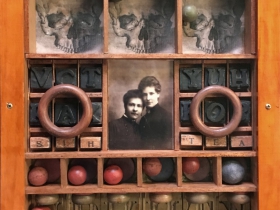