I knew them both. Movie is a distorted hit job on two long-serving patriotic Americans. 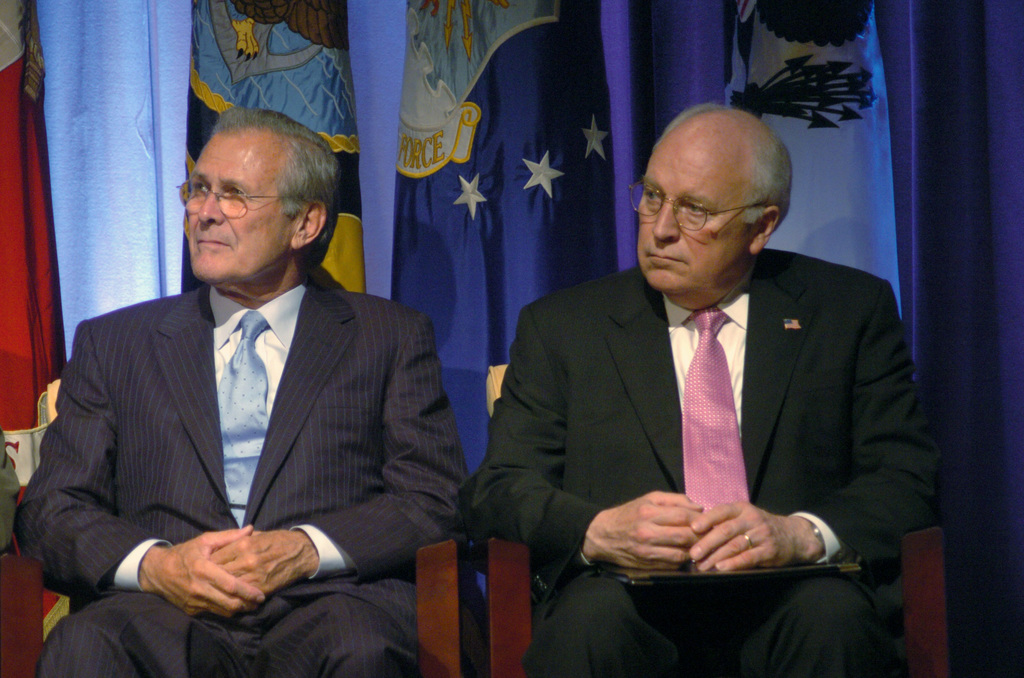 Donald Rumsfeld and Dick Cheney. Photo is in the Public Domain.

Having worked side by side with Dick Cheney and Donald Rumsfeld way back in 1968-69, I was anxious to see how Hollywood would depict them in the just released movie “Vice.” Not surprisingly, given the groupthink politics of Hollywood, both came off in a very negative light.

The opening scenes show Cheney being arrested on a DUI and participating in a barroom brawl. They quickly establish that he’s a Yale dropout. The tough carouser portrayal doesn’t square with the Cheney I drank a few beers with when he was in his late 20s. He wasn’t a big man; he wasn’t very muscular; he didn’t drink a lot. The young Cheney was personally affable, not pugnacious.

He was smart and already a political operative. That started in Wisconsin. After graduating with a baccalaureate from the University of Wyoming in his home state, he started a Ph.D. program at UW — Madison, didn’t finish, switching to political work for Republican Gov. Warren Knowles.

He was already a conservative. He didn’t switch opportunistically when he hit D.C., as the film contends.

We were both Congressional Fellows and ended up in Rumsfeld’s office. Therein lies another distortion in the film. Rumsfeld, who was close to the American Political Science Association, is shown addressing the new fellows and repeatedly using off-color language.

For 13 months, I served as his press aide in Congress and later in the Nixon Cabinet when he was picked to run the poverty program. I can’t remember him using coarse language. He may have, but I never heard it.

The film’s main message was that Rumsfeld and Cheney, political allies for more than three decades, were all about seeking and holding power, not about doing the right stuff. They certainly were very ambitious.

But let’s not be naive. Seeking power is a way of life in Washington, D.C. At least half the denizens of the halls of the Capitol are on the make for higher positions. It’s not all bad. If a politician has some passions for certain causes, he or she gets a lot more done when in the driver’s seat than when not.

Power is like money. It can be put to good use as well as otherwise.

When President Nixon plucked Rumsfeld out of the House to head the Office of Economic Opportunity, Rummy insisted on being in the Cabinet. He took a couple of months to assess the myriad of programs created by the social engineers in the vanguard of the war on poverty. Then he went to the Hill and used his chits with congressional friends on both sides of the aisle to save Head Start.

He also sanctioned experiments with a negative income tax and a contraception program in Appalachia. The film depicts Rummy as smarmy and conniving. I saw a real guy, plenty smart enough, who wanted to reform every organization he led.

Cheney was his head staff guy as he worked to stave off GOP efforts to disband the entire poverty agency.

Despite the opportunity to stay in the halls of power, I returned to Wisconsin as a newsman. So I wasn’t close by as Cheney and Rumsfeld rose even higher to roles as defense secretaries, chiefs of staff and Cheney to “vice.”

They were not hyper-partisan or neo-cons as young men, but they certainly hardened their views of the world after serving as defense secretaries. Those daily briefings must have scared the hell out of them. They were determined to quell the terrorist bases of support in the world. After 9/11 they were obsessed with anti-terrorism.

You can argue they overreacted, but you aren’t sitting in the hot seat.

It is my best explanation for why they made the strategic blunder of going to war in Iraq in 2003. By almost all accounts, it was a colossal mistake that further destabilized the Middle East and cost many lives.

They didn’t learn from President George H.W. Bush, who went into Kuwait with good intelligence, defined objectives, a solid international alliance, support from Congress and a defined exit plan. H.W. got in, kicked butt and got out.

Their miscalculation recalls why and how we got into the Vietnam war. The best and brightest, “the whiz kids, ”like Defense Secretary Robert McNamara over-reacted to the spread of communism. Standing off the Russians over Berlin had to be done. With the benefit of hindsight, getting involved in what turned out to be a civil war in Vietnam did not. It was also an over-reaction.

In his first campaign, George W. Bush said he never wanted to be a nation builder. His close advisers Cheney and Rumsfeld got him into that business. And we are still there.

That said, the producers of “Vice” executed a hit job on two long-serving patriotic Americans, who together made a lot of good calls along with a couple of big, bad ones.

Fortunately, there were only three other people in the Hartford theater the night I was there.