The Tracks Has Always Been a Tavern

Since building erected in 1906. With same owner since 1970, With volleyball for decades. 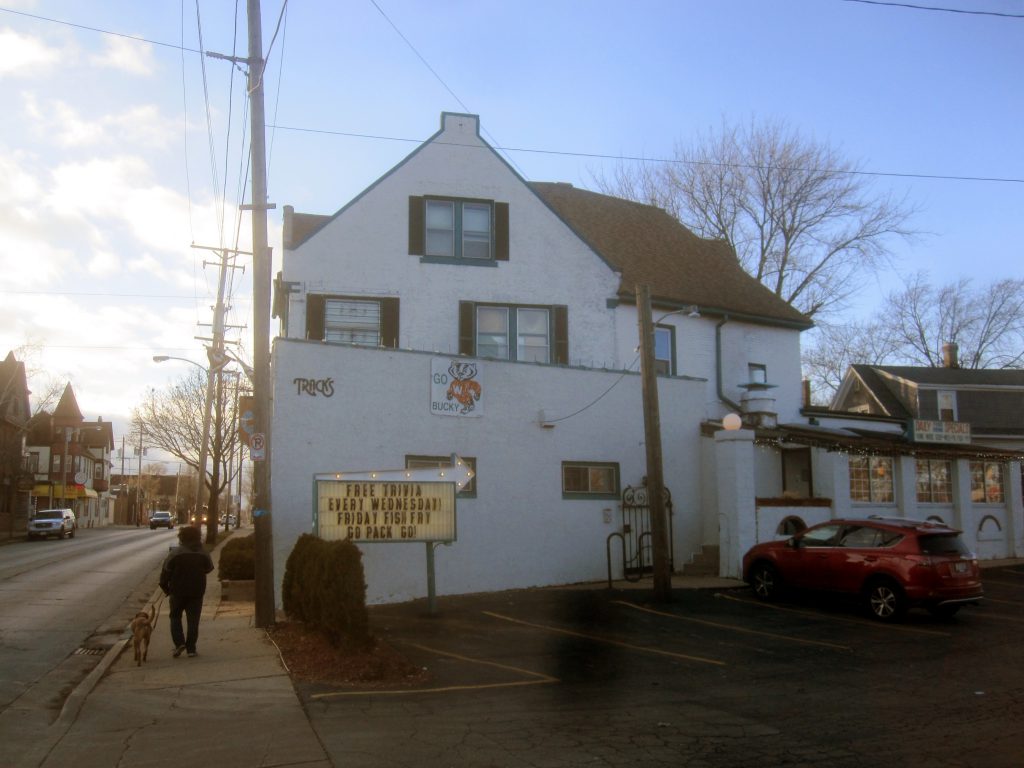 The Tracks. Photo by Michael Horne.

Whereas many legendary Milwaukee bars have seen their ebbs and flows over the decades as old customers age out, newcomers age in, tastes change and neighborhoods evolve, The Tracks, established in 1970 and still, in part, under its original ownership, retains a comfortable stability.

We’ll start with Peter Wolbersen, 73, who rebranded the old tavern, naming it after its next-door railroad when he set up shop in June, 1970. Wolbersen has since sold a majority of the business, but retains a 30 per cent interest, and owns the real estate as well. At the time he purchased the place, Riverwest faced an existential threat: there were plans to widen E. Locust St. between N. Humboldt Blvd., where the tracks sits on the northwest corner, and N. Holton St. The area west had already been widened, stripped of its commercial properties, giving it the desolate appearance it holds to this day. The neighbors arose and meetings were held, some right here at the bar, where customers face each other, with the bartender working inside the ring. The neighbors won; the commercial district was saved, and the Riverwest neighborhood, as we know it today, was given birth to its identity and eventual growth.

Throughout it all, and the ensuing decades, The Tracks has maintained its consistency as a neighborhood gathering spot for food and drink. The changes here have been subtle but significant. The Tracks was the first to embrace outdoor volleyball in season, opening the courts on the former right-of-way of the Milwaukee Road’s fabled “Beer Line,” which ran so close to the building that the structure, built by Leiser & Holst in 1906, was designed with its northeast corner cut off to accommodate the tracks. The volleyballers tend to be in their late 20s and early 30s, which is a demographic sweet spot for beer consumption. The outdoor recreation keeps the clientele young; the old-timers can watch from the sidelines.

The business also maintains a long support of community events including Locust Street Daze, where a stage is erected outside on the street between The Tracks and the Ma Baensch Herring Co. plant on the south side of Locust.

The Tracks was one of the first four accounts of Lakefront Brewery, which first operated from an old bakery a couple of blocks away on E. Chambers St. and remains in the neighborhood today in a riverfront location. Riverwest Stein Beer, the company’s flagship, has been on tap here continually for 31 years, longer than at any other establishment. Today, Riverwest Stein Beer is available on tap at over 500 locations in the metropolitan Milwaukee area.

The Tracks was built as a $5,000 tavern and residence whose address was then 4-Locust St. for Martin Kosiedowski in 1906. It is a solid masonry structure, with strong Teutonic influences, particularly at the roofline, and mostly lost below to remodelings. The lot was indeed close to the freight tracks, and was irregularly shaped due to the path of the rail lines, which cuts the only diagonal in Riverwest’s otherwise perfect rectangular grid. It was among the last to be developed, due likely to the proximity to the trains, rendering it less than desirable for purely residential use. By 1917 Mrs. Kosidowski was listed as the owner (the tavern business was a good widow maker) and she built a 16-foot-by-21-foot residential addition to the rear of the building for $600. It was about three feet below the floor level of the tavern. Other buildings were added to the site, including a garage in 1919 and a very small building constructed as a oil station office in 1920. Both are now gone.

The tavern survived Prohibition by operating as a licensed soft drink parlor. It regained tavern status in 1934.

In 1949 a kitchen addition was built to the east. It remains.

The expanded kitchen called for an expanded dining room, and widow Kosidowski’s 1917 addition served that purpose. In 1951, the rear portion was raised three feet to match the tavern floor level. Two four-foot arches were cut into the walls, a second exit was provided, and a door was bricked up.

By 1967 Dennis E. Ervin owned the place, calling it the Switch Inn. He adjusted the front door to have it swing outward, “not … more than 1ft beyond lot line.” He removed a partition to increase the dining space, suspended the ceiling in the bar room and paneled the walls. These changes remain. William Domoracki installed a viewing area between the bar and the billiard room in June 1968. (Those pool players could be sneaky, and it was best to keep an eye on them. They could have been dealing and doing drugs.) A projecting sign later that year was installed reading “Red Lantern Lounge.” Jerry Mandella was listed as the owner.

Peter Wolbersen arrived in June, 1970, renaming the place “The Tracks,” as it remains. The Blatz sign was replaced by an Andeker sign. Andeker was a premium beer. Things were going upscale, nice and slowly, like the Beer Line’s 1-per cent grade from the riverfront up the bluff to the intersection of Humboldt and Locust.

Due to its odd configuration, what with the former tracks to its side, and a number of additions, the east side of the building doesn’t look like much, providing us mostly with a blank wall and a glimpse of the beer garden and volleyball courts beyond. The wall lining the beer garden is relieved with arches, and the garden itself is a pleasant refuge in summer. The street facade is greatly altered from the original, which was quite an attractive building at one time, and still is, on the upper two floors. Since 1971 the facade has been characterized by a white stucco veneer, with arches, planters and a colorful, illuminated Tracks sign hanging where Blatz and Andeker once did.

But we didn’t come here to stand outside. Let’s head in to where the taps and conversation flow. The visitor is greeted by a painting of the tavern executed by a customer. It is one of the homey touches here, which include the general ambience and the cozy bar.

A Significant Array of Railroad Artifacts

The food, drink, television sports and the fellow customers may divert the casual visitor from what should be a principal obligation of any first-time (or repeat) customer of The Tracks: its significant collection of railroad memorabilia and artifacts, built up over the decades, and vying for space with Miller Lite posters. A bright red and white plaque from Wisconsin Central Ltd. is but one of many iron items in the collection, including one from the Lima Locomotive Works, “Incorporated January 1944.” The Baltimore & Ohio Railroad’s emblem, featuring the dome of the U.S. Capitol is hanging on a wall. A beautiful poster of the Olympian Hiawatha celebrates the Milwaukee Road, whose one-time tracks gave this bar its name. 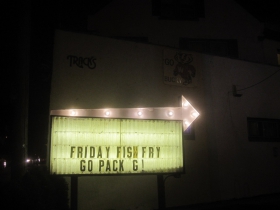 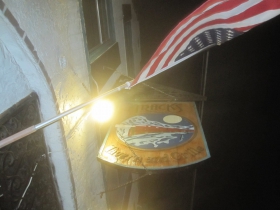 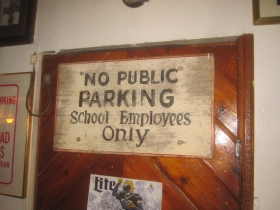 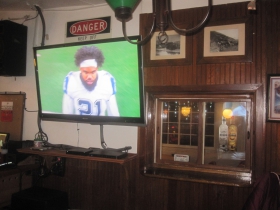 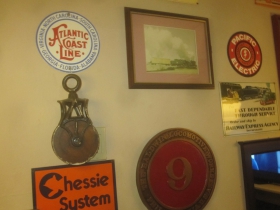 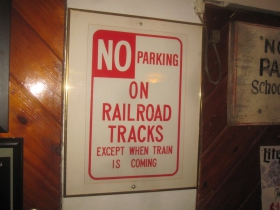 One thought on “Bar Exam: The Tracks Has Always Been a Tavern”