Don’s Diner Is A Bit Deluxe

Yes, comfort food and retro atmosphere, but dishes like scrambled eggs with truffles. 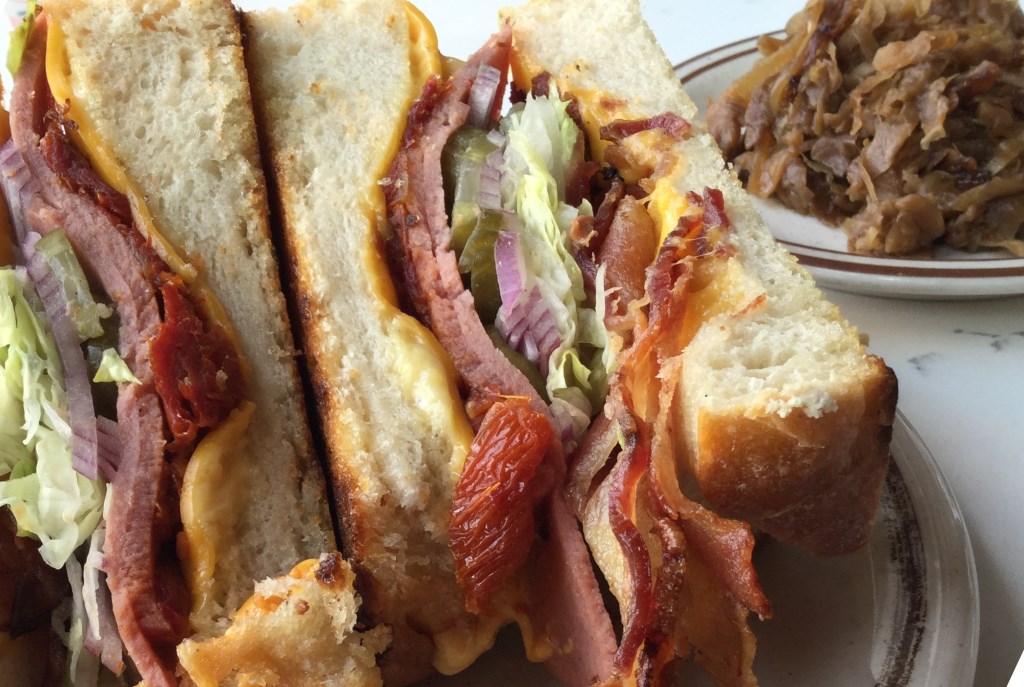 There’s nothing like an old-fashioned diner where you know the comfort food will leave you mellow and comforted. That’s how friends and I felt after two visits to Don’s Diner & Cocktails, once on a busy Sunday, and again on a leisurely, not so busy weekday.

We were offered seating options for the Sunday brunch: wait 30 minutes, or, dine at the bar in the cozy back room. We opted for the latter, and found ourselves elbow to elbow, where a conversant bartender explained a problem with the electrical system, which had issues providing TV and bright lights simultaneously, hence the sultry atmosphere. The Packers were on the TV, enough said there. So we squinted to read the menu and though we barely saw what we were eating, we three agreed it was all delish.

As we were there for brunch, we stayed with Eggs All Day and chose Truffled Eggs, the Vegetarian Bowl, and Gravlax Benedict.The soft-scrambled eggs had just a hint of truffle, enough, yet not overpowering, as can happen with that strongly flavored mushroom. When we marveled at the soft texture of those eggs, the bartender overheard us and said, “Our chef is very fussy about his scrambled eggs.” They were served on open-faced toasted sourdough and topped with radish sprouts.

For the Vegetarian Grain Bowl, the chef cooked the barley to crunchy chewy tender, then combined the grain with veggies, herbs, a few scattered pieces of garlic, and finished it with pink peppercorn bechamel, making a healthful bowl that was delicious. Like the sprouts on the truffled eggs, mache added bright fresh flavor to the bowl. We thought it odd that they listed the bowl on the menu under Eggs All Day, because, if we wanted an egg, there was an additional charge. Why not throw on a poached egg?  If the customer is a purist about “Vegetarian,” leave it off.

You need to like salmon if you order the Gravlax Benedict. Unlike the usual lovely, thinly sliced gravlax in a benedict, this one had house cured chunks of salmon served on an English muffin with crisp fennel and cucumber surprises in each bite. I found the chili dill hollandaise bland. It lacked enough gusto to stand up to the briny salmon. 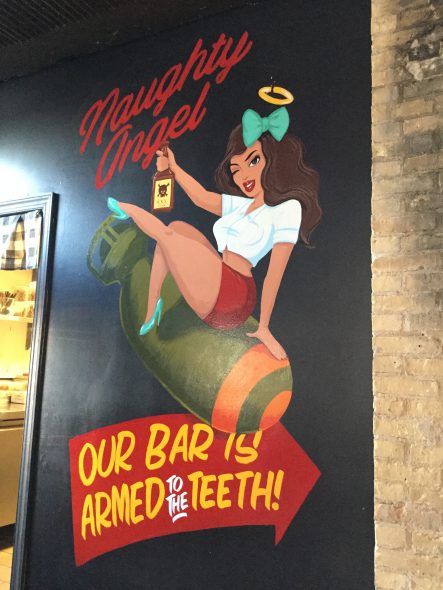 Don’s Diner, a newcomer in Walker’s Point, has served their enhanced diner food since October 26, when they opened in the space most recently occupied by c.1880. They are part of the Stand Eat Drink  group which also includes Movida and Hotel Madrid. Yes, there was a “Don,” grandfather of SED partner Aaron Gersonde. He was a World War 11 vet, a Milwaukee Police Captain, and a diner guy. The photos on the wall are Don’s family, and the Naughty Angel mural on the back wall refers to the Naughty Angel aircraft Don flew in the war.

At lunch, the Bologna Sandwich, a classic, albeit despised when I was a kid and found it in my lunch box, piqued my curiosity. What could they possibly do to a bologna sandwich to make it palatable and worth $13.00? Here’s what they did at Don’s. The chef layered red onion, house-made pickles, melted American cheese, bacon, and sundried tomato jam inside Texas Toast. The alleged star of the sandwich, the bologna, turned out to be a minor, almost imperceptible note in this complex chorus of flavors. From red potato salad or sauerkraut, the sides, I chose the kraut, not the best accompaniment to the sandwich. It would work better inside a sandwich than as a stand-alone.

The Cobbler, one of the Baked French Toast options, tasted more like bread pudding than French toast, and that is a compliment! This dessert-like dish, with a crunchy oatmeal streusel topping, had chunks of apple and peaches in a sweet sauce underneath vanilla whipped cream. It could easily serve two along with an egg and some bacon from the Sides.

An elegant Dos Leches Cake, not Tres Leches, sitting on the bar meant dessert was mandatory. We didn’t miss the third milk, possibly the  sweetened condensed, as the sponge cake had enough ooze from two milks and wonderful vanilla flavor. A giant slab of the cake fed three of us and tasted as good as it looked perched on the bar under glass.

As friends and I devoured our lunch, Fats Domino and Elvis crooned in the background, offering us a stroll back to the 50s when life was less complicated and bologna certainly wasn’t packaged inside Texas Toast with sundried tomato jam and house-made pickles. 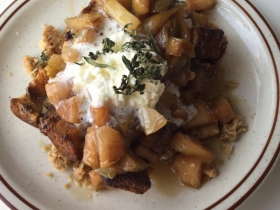 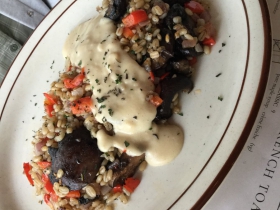 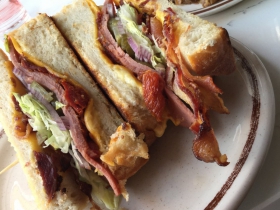 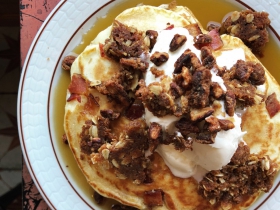 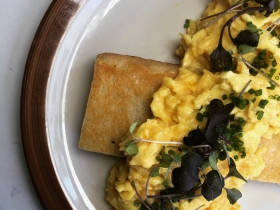 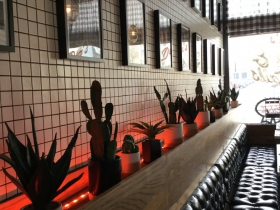 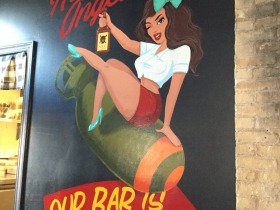 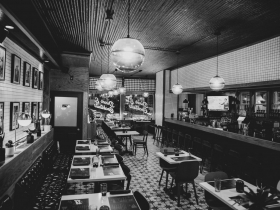