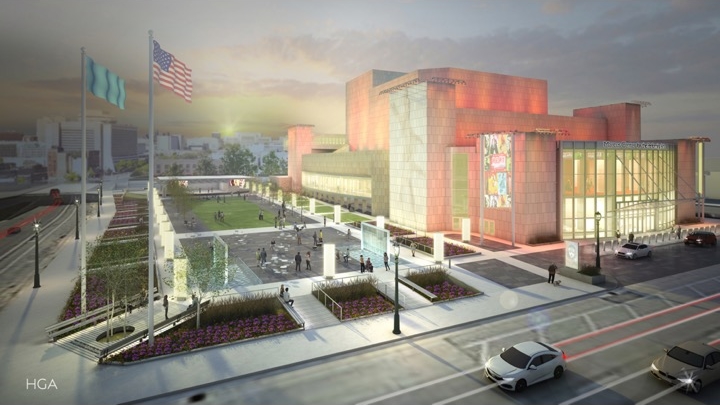 The Marcus Center for the Performing Arts is planning an ambitious redesign of its building and grounds, with the hope of creating a more open and accessible center for the future.

The plans include a new rounded glassy atrium on the west side of the building fronting the river. The dark glass in the front lobby will be replaced with translucent glass opening up the front of the building to the public and patrons inside. There will be new seating in the main theater and an aisle reconfiguration that is more accessible for persons with disabilities, Mary Louise Schumacher reported in the Milwaukee Journal Sentinel.

And perhaps most excitingly, the grounds will be entirely redone, creating an open public park with a large open area on the south side of the building along Kilbourn Avenue to be called the great lawn. It will have fountains, new outdoor event space and chairs that people can move around in the park.

So far Milwaukee County has committed $10 million to the project, but the final cost is not yet determined. The project is expected to be completed roughly between 2022 and 2024.

It was reported this week that defense contractor Leonardo DRS is the firm leaving Milwaukee for Menomonee Falls.

And it passed over the chance to expand within the Century City business park: an attempt to create a business park on the grounds of the former A.O. Smith and Tower Automotive site, Tom Daykin reported in the Milwaukee Journal Sentinel.

The company’s new complex will include a 350,000 square foot manufacturing facility and a 120,000 square foot office building in the Woodland Prime business park on Good Hope Road. DRS will leave behind its building at 4625 N. 30th Street.

Daykin also reported this past week that another firm is considering leaving Milwaukee’s north side, this time for Oak Creek.

Astronautics Corp. of America, which has been in the market for new space for nearly a decade, is eyeing a move away from its building at 4115 N. Teutonia Ave. Though, Daykin reported that sources tell him the move is more certain than the company spokesperson is letting on.

Astronautics has between 500 to 600 employees, and DRS currently employs more than 400 in Milwaukee.

USPS and R2 Working Out, Maybe

The United States Postal Service and the owner of its downtown Milwaukee building are apparently working to resolve out of court a lawsuit the owner filed against the federal agency.

The building is owned by an limited liability company that is affiliated with Chicago-based R2 Companies. In August, the company filed the eviction suit citing property damage and disrepair. R2 has had plans to redevelop the building since at least 2016 when it unveiled renderings for what would be a massive residential and commercial real estate venture.

This latest development has the two parties working it out, maybe. In BizTimes, Arthur Thomas quoted Matt Garrison of R2 Properties saying: “Need a little less talk and a lot more action.”

3 thoughts on “Plats and Parcels: A Revamped Marcus Center”