Plus: WhirlyBall and dining! Heated domes at Benelux! And a new Walker's Point pop-up. 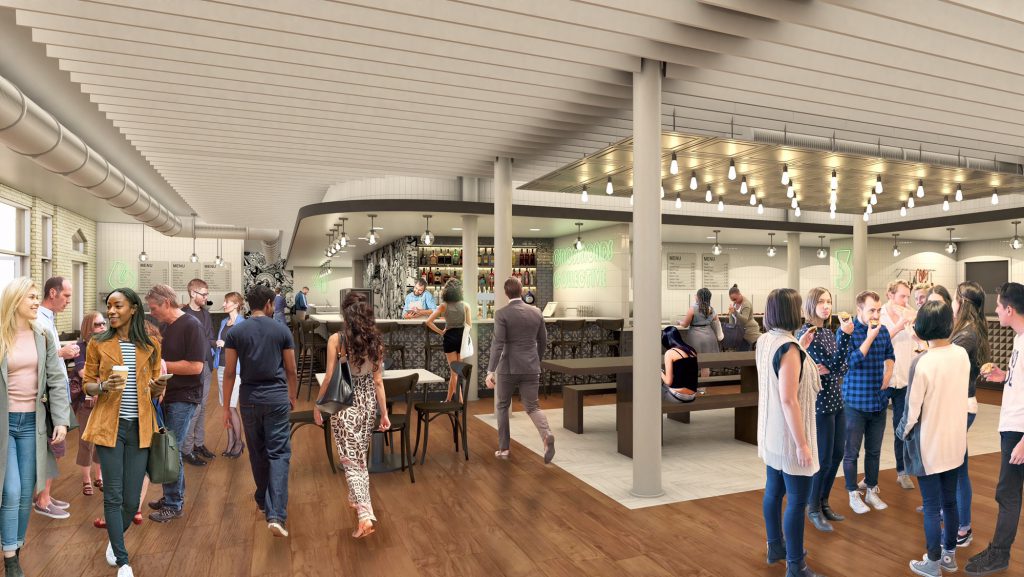 The development of the food hall, located at 2238 N. Farwell Ave. and owned by Tim Gokhman, has been much anticipated and has been covered in Urban Milwaukee articles over the past couple months.

Now, the food hall has announced dates for a few soft-opening previews of the space taking place the 13th through the 15th via invitation, leading up to the public opening on the 17th.

Chris Foran of the Milwaukee Journal Sentinel has more on the food hall’s final lineup:

Unlike a shopping mall food court, a food hall’s tenants typically are local food providers, with menus of made-from-scratch offerings.

They join a lineup that also includes Falafel Guys, Laughing Taco, Scratch Ice Cream and Frida, a soup-and-sandwich restaurant from the owners of Tess. The food hall also will have a “secret” speakeasy-style bar, called Shanghai.

Specific hours of operation have not yet been confirmed. For up-to-date information, visit the Crossroads Collective Facebook Page. 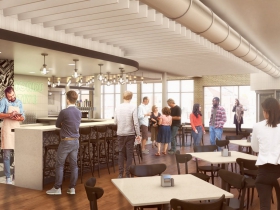 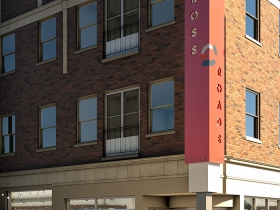 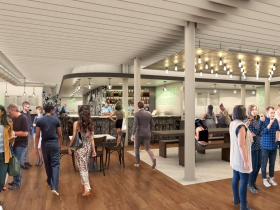 Brookfield Will Combine WhirlyBall and Food! 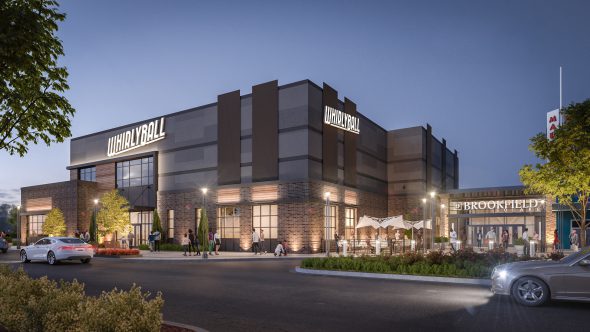 Construction of a new restaurant and entertainment center is now underway at Brookfield Square.

It’s a chain out of Chicago named WhirlyBall, which will be located at Brookfield Square Mall (95 N. Moorland Rd.) at the former space of Sears, which closed earlier this year.

The building will cover a sizable 45,000 square feet and will include two stories with an ample dining area and room for the unique game that gives WhirlyBall its name: bumper cars combined with lacrosse.

It will include a 75-seat dining area with an outdoor patio, along with private event space and two ground-floor WhirlyBall courts.

More details will come as the building is developed. Also planned is the eventual construction of a 54,000-square-foot conference center and Hilton Garden Inn hotel which will be linked up to the prospective restaurant and entertainment center via a glass walkway.

Toast, located at 231 S. 2nd St., will serve fish fry with an accompanying ’70s disco theme for many Friday nights to come starting this week on December 7th

Bobby Tanzilo of OnMilwaukee has more:

“We have been having a lot of fun with our breakfast/brunch/lunch concept called ‘Toast’ and want to extend the party into Friday nights,” says the restaurant’s Gordon Goggin in an email.

The pop-up will be ’70s disco themed and will operate from 5 until 9 p.m., offering what it calls a “retro fish fry” – albeit one without potato pancakes, sadly – as well as “cheap beer, chill service and groovy tunes from the ’70s.”

Cheap four packs of beer will also be available during the pop-up with brands like Schlitz and Old Milwaukee. Other entrees and appetizers besides the fish fry will also be served such as fish tacos, Caesar salads, shrimp cocktails and soft pretzels.

After being announced at the beginning of November, the new Lux Domes at Cafe Benelux (heated rooftop domes atop the cafe) are now available for reservation.

There are six domes available on the roof of the cafe located at 346 N. Broadway which can seat 2-8 people each and can be reserved for 90 minutes on Fridays, Saturdays, or Sundays.

But don’t get too amped about it: all the reservation times that have recently been made available (through December 23rd) are already booked.

Molly Snyder of OMC has more:

Reservations are $200 and include a drink package as well as keepsake mugs for guests. Food and beverage packages are also available and pre-ordered at the time of the reservation on the website…

“We wanted to create a way for Milwaukeeans to enjoy the city during our cold and dark winter evenings that was an experience unlike any other in the city,” said Dan Herwig, director of brand and marketing for Lowlands Group. “We’ve seen similar rooftop experiences in London and Boston add life to those cities in their harsh winters, so we figured Milwaukee would be a great fit for something similar.”

The best way to seek updates on availability is to check the Lux Domes page on the cafe’s website, where information on reserving a dome is available.

The Mexican restaurant Lala’s Place in Cudahy seems about ready to move.

The restaurant, which has been located at 3470 E. Layton Ave. since 2012, has recently been presented with an opportunity to relocate to a more favorable location not too far from the current one.

Brian Biernat, the director of economic development, inspection and zoning in Cudahy, said the city has been talking with Lala’s Place owner Alicia Guerra over the past couple of months about the business potentially moving to a vacant property owned by the Community Development Authority.

This week, the CDA granted Guerra a 120-day period in which the property at 4701 S. Packard Ave. would be exclusively available to her. The high-visibility site is in the southwest corner at the intersection of Packard and Layton avenues.

The prospective new location for Lala’s would be a good fit for a restaurant since it housed others in the past.

Lazy Susan, the American-style restaurant in Bay View, is extending its Sunday brunch hours while ending its Saturday brunch altogether.

Carol Deptolla and the Journal Sentinel has more:

Nov. 24 was the last Saturday brunch for a while; chef-owner AJ Dixon said a shortage of skilled, reliable restaurant workers led her to put Saturday brunch on hiatus, especially during the busy holiday season.

Dixon also is planning some menu tweaks starting in January. She expects to have a new menu monthly with specials and fewer shareable plates, and might include sandwiches or a bar menu.

More information on the hours of operation for Lazy Susan can be found on the restaurant’s website.