Poor and middle class pay much higher percentage of their income in taxes.

By Tamarine Cornelius, Wisconsin Budget Project - Nov 26th, 2018 12:00 pm
Get a daily rundown of the top stories on Urban Milwaukee

New research shows Wisconsin’s tax system contributes to the growing concentration of wealth by calling on the richest residents to pay the smallest share of their income in taxes, and requiring residents with low and moderate incomes to pay more than their fair share. 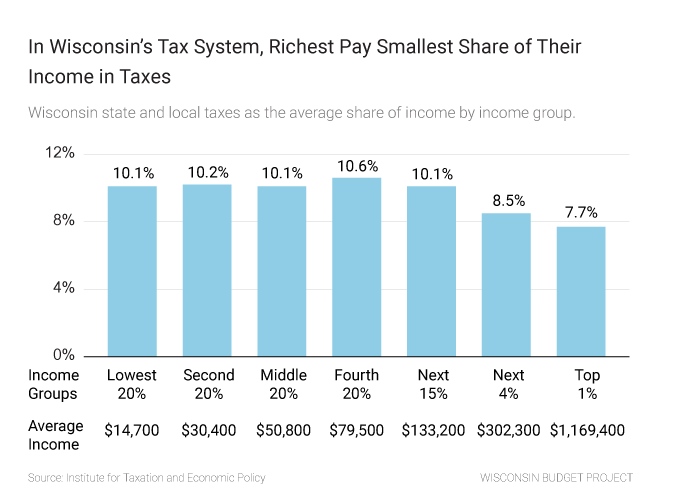 Wisconsin is one of 45 states that taxes poorer residents at a higher rate than richer residents. Our neighbor Minnesota is one of the states that provides a model for a more equitable tax system, one that taxes poorer residents a smaller share of their income and the richest residents a higher share. In Minnesota, taxpayers in the lowest 20 percent by income pay 8.7 percent of their income in state and local taxes on average, lower than the 10.1 percent paid by the lowest income group in Wisconsin. That relationship is reversed at the highest income level: The top 1 percent in Minnesota pays 10.1 percent of their income in taxes on average, compared to just 7.7 percent in Wisconsin. 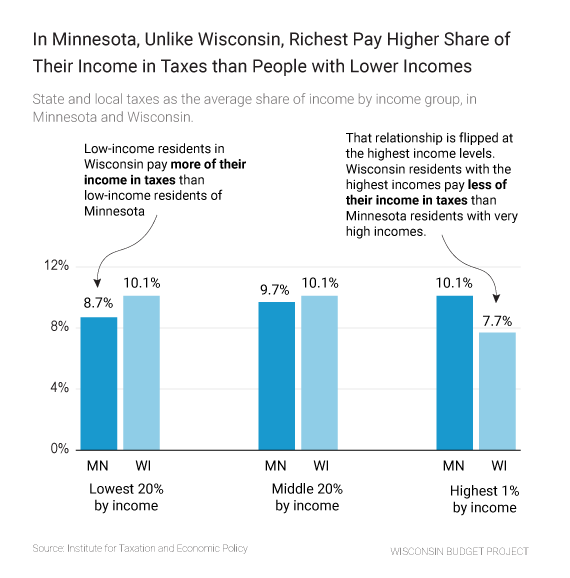 Our tax system is a major driver of inequality and contributes to the increasing concentration of income and wealth in a few hands—hands that are most likely to be white, due to a long history of racial discrimination. The recent tax changes at the federal level under the GOP Tax Plan also demonstrate how our tax system can be changed to funnel resources to a small group of wealthy, typically white individuals. The tax cuts that President Trump signed into law last year reward white wealth at the expense of the economic security of poor, middle-class households and households of color. On average, white households receive $2,020 from the Trump tax cuts, Latino households receive $970, and Black households receive $840, according to research from the Institute for Taxation and Economic Policy. Even among the ultra-wealthy, whites fare better, because the law gives bigger tax cuts to income earned in ways that are more typical of white individuals than individuals of color.

Wisconsin can improve its state and local tax system in a way that gives all families greater access to opportunity, regardless of race, ethnicity, or income. Here are four steps state lawmakers could take to make sure Wisconsin families and communities can thrive, and what they’re doing instead: