$133 million project with hotel, offices, could get $21.5 million subsidy. 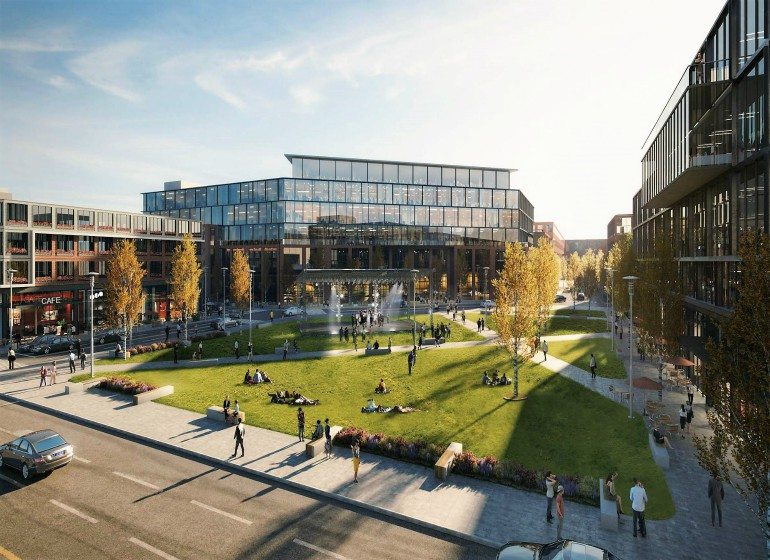 The Quarter in West Allis. Rendering from Cobalt Partners.

A $133 million project in West Allis may get public financing support, pending approval by the West Allis Common Council.

Cobalt Partners is developing the project, called The Quarter along S. 70th St. just north of W. Greenfield Ave. West Allis would invest more than $21 million in public financing to build a complex with a hotel, office space and a small park, Tom Daykin reported in the Milwaukee Journal Sentinel.

The project would be built in two phases. The first phase is slated to include a hotel with more than 100 rooms. The second would build a whopping 400,000 square feet of office space. It’s expected the development would create an estimated $87 million in assessed value on a site that’s currently worth just more than $3 million today.

The project is just one of many Cobalt has underway, including a proposed 30-story residential tower in suburban Fox Point.

A local, non-profit development corporation has set its sights on homeownership in the Harambee neighborhood.

The Martin Luther King Economic Development Corporation, which recently developed the Welford Sanders Historic Lofts, plans to purchase and rehab eight to 10 homes annually, with hopes of selling them to area residents.

The properties will be a mix of single-family homes and duplexes. Some properties would be sold at market rates, while others would be targeted at below-market rates to specific buyers. “MLK Homes is a very tailored strategy that will consider the best fits for properties and people,” said Nicole Robbins, Housing and Real Estate Development Director for MLKEDC.

Dallas-based developer Hillwood purchased 75 acres of land along Ryan Road. As Arthur Thomas reported in BizTimes, it will likely be developed for an Amazon distribution center. Hillwood and partners Capstone Quadrangle and General Capital Group are planning to make an announcement soon concerning the nature of the project.

News broke this summer that the e-commerce giant was planning a four-story building with more than 2.5 million square feet of space, potentially bringing 1,000 jobs to Oak Creek.