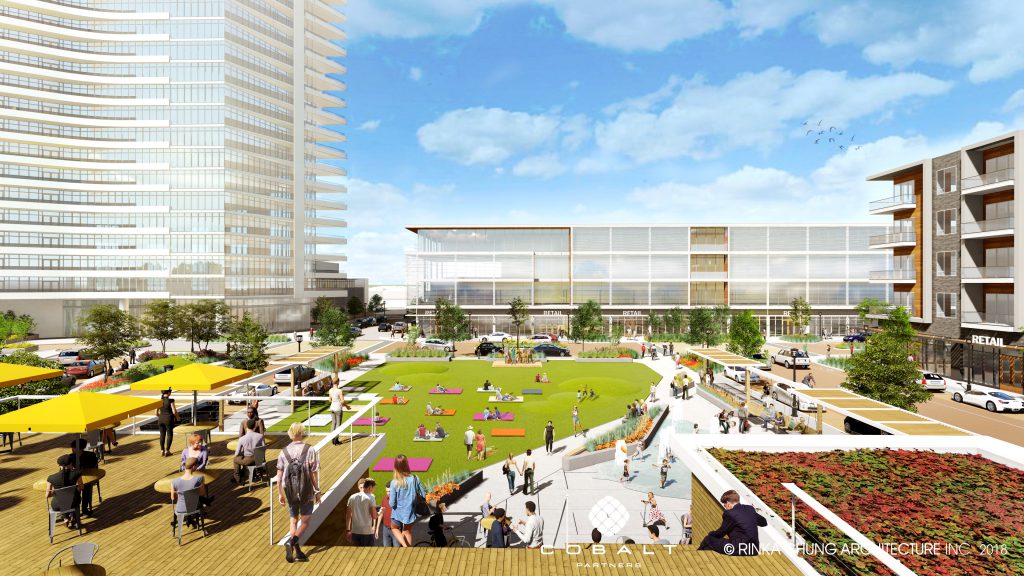 An ambitious plan to create a 30-story tower, the first substantial residential highrise in a Milwaukee County suburb, calls for the demolition of a historic circa 1929 building housing the classic Speakeasy bar and Los Paisa Mexican Restaurant on the 28 acre site. Others to be demolished include a $4 million TCF bank building, a U.S. Bank branch, an apartment building, a hair salon and three office buildings. Only one structure, the headquarters of Mark Travel, is to remain. The buildings include an unusual trapezoidal structure clearly visible to travelers on I-43, just north and east of the intersection with W. Brown Deer Rd.

“The development proposes that  all buildings except the current rectangular Mark Travel building would be demolished.  … Mark Travel employs nearly 700 people at the location currently,” according to Susan Falk of Falk Public Relations, who was hired by the village to coordinate communications on the project.

The ambitious project, which is to include Tax Incremental Financing by the Village of Bayside, will be discussed at a information session to be held at 6 p.m. September 12th at the Village Hall, 9027 N. Regent Rd.

Cobalt Partners will be hosting informational sessions to review the development proposal on September 11 and September 20. Both sessions, will start at 6 p.m. and take place at the MSI Data Building, 500 W. Brown Deer Rd., one of the sites acquired by the firm.

According to a press release from Cobalt Partners, the primary uses of the site will be to provide a “highly architected, mixed-use development … luxury residential, corporate and retail” space, along with “restaurant/grocery and boutique retail/health and wellness” supporting uses.

The first phase, which is expected to commence in the spring, will feature the residential tower with 260-280 units, 10 units of townhouses, 50 residential units located above retail stores in a three- to four-story building, 72,000 square feet of retail/restaurant space and an office building ranging from 60,000 to 100,000 square feet in size.

Construction work, including new infrastructure and public streets, would be staggered into 2021.

According to the press release,

The project is named “OneNorth.” The branding is “intended to embody the project’s bold stature, which both establishes a new standard for luxury living in Milwaukee’s North Shore and curates a mix of uses within a singular, synergistic venue,” said Scott Yauck, Cobalt Partners president and CEO.

“Bayside and its surrounding North Shore communities already offer an unparalleled combination of high-end amenities, modern convenience, and safety within a landscape of lakeside parks, walkable districts, and easy access to transportation. OneNorth will supplement and enhance those attributes in a thoughtful way.”

With the significant exception of the Los Paisa – Speakeasy building, a 2,000-square-foot Lannon Stone Tudor structure that is among the oldest and finest in the 2.39 square mile village of 4,389 people, the buildings to be razed are of little interest. Their scattershot placement on the site, and the acres of parking surrounding them are textbook examples of urban sprawl. Most of the properties are currently owned by the affiliates of the LaMacchia family, owners of Mark Travel, a leisure travel business which includes such well-known divisions as Funjet Vacations and Adventure Tours, USA. The bank building is owned by Ogden & Co., and an office building housing the headquarters of Katz Properties is owned by Bruce Peckerman. Cobalt owns the Speakeasy and the building at 500 W. Brown Deer Rd., according to Falk. In the center of the site is a vacant lot, which has been empty since the demolition of a former nursing home more than a decade ago. The site is also the northerly terminus of MCTS Route 63. 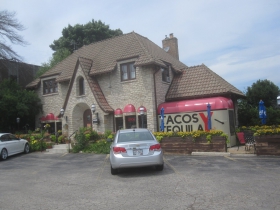 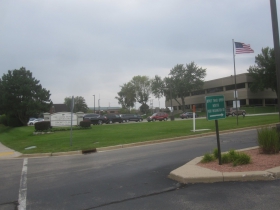 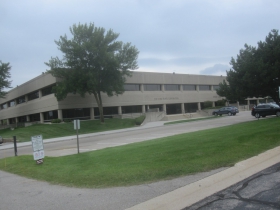 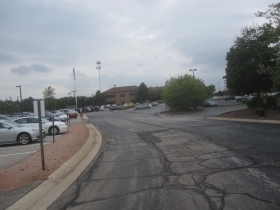 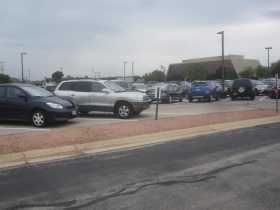 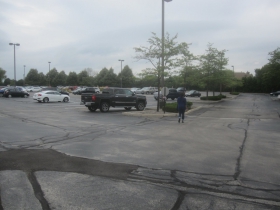 Running Out of Space, Suburb Reaches for Sky

With the exception of a few multi-acre lots along the lake shore, and this parcel, the Village of Bayside is nearly fully developed, limiting the community’s ability to increase its tax base according to the old postwar formula of developing old farmlands, orchards and golf courses into single family homesites, usually on one-acre lots. The village has few sidewalks, its drainage is by ditch, and its infrastructure (and population) is aging. The only comparable potential development site would be the property of the Bayside Garden Center, which shows no signs of going out of business. The village has no industry, further limiting the tax base.

The press release quotes Village Manager Andy Pederson noting that “the Village has explored various alternatives over the years. In the last several months, the Village engaged in productive discussions with Cobalt Partners to facilitate a potential project plan submission that would formally address some of the Village’s needs, including multi-unit housing for active seniors and families in the North Shore and commercial uses which would diversity and enhance the Village’s tax base.”

“The Village is focused on a development that would address identified needs and concerns within the community, including diversifying its residential housing stock; and adding boutique retail, service providers, a community gathering place, public amenities and office alternatives for the Village’s private sector partners, while at the same time secure the long-term future and financial viability of the community.”

The City of Glendale recently redeveloped Bayshore Town Center using similar design and urban planning elements, including residential above retail mixed-use buildings, interior streets, a public plaza and other amenities, including parking structures. But the tallest building at Bayshore is merely a sixth of the proposed height of the luxury high-rise tower planned for Bayside. It would be, by far, the tallest building in Milwaukee County outside the city limits. The Moderne, built downtown in 2012, would be comparable. It has 31 stories, and, at 348 feet in height, is the 11th tallest building in the county. Like the proposed Bayside development, it was designed by Rinka Chung Architecture. 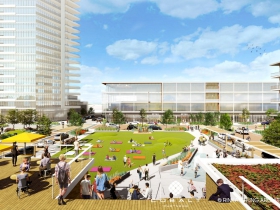 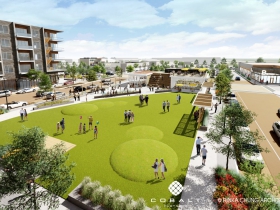 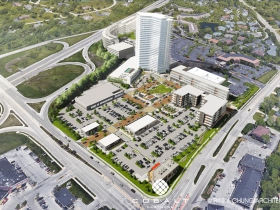 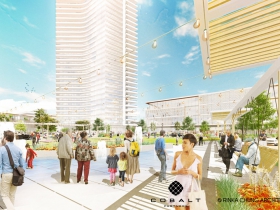 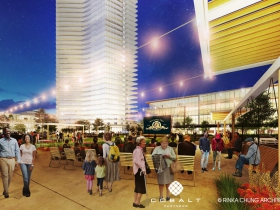 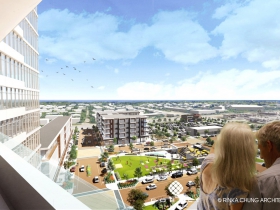 Isolated towers in quasi-suburban locations are not common here, with the nearest example being Park Place, an office development on the far northwest side of the city. They are not unknown in larger metropolitan areas, such as Washington D.C. and vicinity, where suburban governments have welcomed large residential and commercial towers to augment their tax bases. However, these are generally located along busy transit corridors, particularly near commuter rail transportation options. Some suburbs, like Shorewood and Wauwatosa, have welcomed multiuse buildings of four to five stories, but these are inner ring communities, built on the city grid, and substantially urban in character, unlike this site. Curiously, the tower is to be located at the northwest portion of the site, and not closer to the intersection of N. Port Washington and W. Brown Deer roads where it could better anchor the project.

Tower Sure to Get a Rise

Although it is early to predict the future of the proposed development, it is almost certain to get a rise out of the residents of Bayside, who are protective of the community’s quiet charms and low-rise stature. In July Barry Mandel and his partners backed out of a proposal to develop a site in the neighboring community of River Hills when residents opposed his plan to build 154 apartments in five buildings of three stories in height on a 56-acre propery. Signs saying “Save River Hills” dotted the community, and it would not be beyond the bounds of probability to see a Bayside version of such signage. An early test of public opinion will come at the open house, when it is held, and at the public meeting on September 27th. It will also be interesting to gauge public reaction to the loss of the Speakeasy building as well. The operators of Los Paisa confirmed that they have been told that their building will be demolished, adding, with an air of resignation, “What can we do?”

According to the press release, Cobalt’s head Scott Yauck says, “‘This will be a game-changer for the North Shore of Milwaukee. The luxury tower will offer an elevated style of living – both literally and figuratively – never before available in the North Shore.’” According to Yauck, “the offering will rival any downtown option without concerns that are often associated with downtown living and in a setting that remains home to many baby boomers, empty nesters, and snowbirds with changing lifestyle preferences.”

Correction: Dates and times of the various meetings have been corrected.