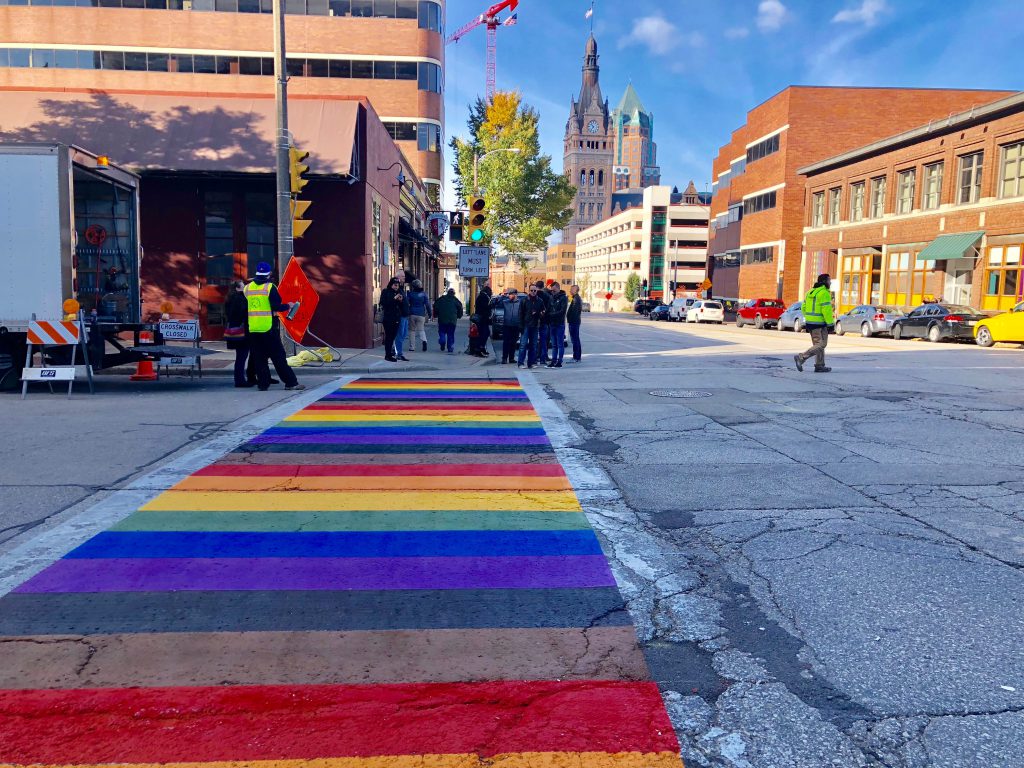 Rainbow crosswalk in front of Taylor’s and This Is It. Photo by Jeramey Jannene.

One Downtown intersection is now quite a bit more interesting thanks to Milwaukee Pride.

The city doesn’t think this will be the last such intersection to get a sense of whimsy. “There’s been a great need and a great interest to do this throughout the city,” said City Engineer Jeff Polenske at a Saturday morning press conference.

The crosswalks are an important visual statement for Milwaukee’s LGBTQ community. “They affirm, that we, as LGBTQ people, are a valuable part of this city,” said City of Milwaukee Equal Rights Commission member Tony Snell Rodriguez. “Keep in mind, it will encourage some conversations as we come together and walk together.”

“[The crosswalks] will be a reminder of our past, our present, our future,” said Milwaukee Pride board president Wes Shaver.

The location of the crosswalks wasn’t chosen at random. This Is It, one of the oldest gay bars in the country, is located just steps away at 418 E. Wells St. The bar, which is undergoing a significant expansion, celebrated its 50th anniversary this summer. Cathedral Square Park has added historical significance for Milwaukee’s LGBTQ community said Michail Takach. “You’re at the epicenter of history that has been hidden for 90 years.”

The historian and Milwaukee Pride vice president told the audience that the city’s first pride march went from Walker’s Point to Cathedral Square in 1989. The annual march has transformed into Pridefest, one of the country’s largest LGBTQ festivals. But decades before the march and This Is It opened, Takach said the long-closed Seaway Inn tavern and demolished St. Charles Hotel were important gathering places for the city’s then-underground LGBTQ community.

The crosswalks are dedicated to This Is It founder June Brehm and to the 1,500 participants of the first pride march.

Mayor Tom Barrett and others praised the crosswalks as one more sign of the city’s tolerant attitude to people from all walks of life. Barrett said he was pleased that the Human Rights Campaign has taken notice. The organization recently released its Municipal Equality Index scores and the city earned a perfect score.

But despite the city’s efforts to be open and welcoming, the project almost didn’t come together due to a combination of state and federal laws.

“This was a lot harder than it needed to be,” said Alderman Robert Bauman. Pointing at a nearby sign that marks E. Wells St. as Wisconsin Highway 32, the alderman explained that federal law prevents colored crosswalks from being painted on state highways.

To get around the regulations the city has determined that the east-west crosswalks at the intersection are part of N. Jefferson St., a local city street, and therefore safe to paint.

Bauman told the approximately 100 onlookers in attendance: “Maybe we need changes in Madison to get a little more tolerant attitude.” Bauman and Barrett both encouraged attendees to vote.

This isn’t the first time that the intersection has sported a unique crosswalk. White piano keys were painted in the crosswalk in 2013. The piano keys, a connection to the Jazz in the Park music series held in the park, were covered at E. Wells St., but one set will remain one block north along E. Kilbourn Ave. 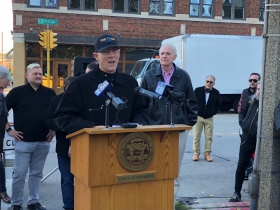 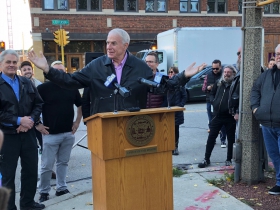 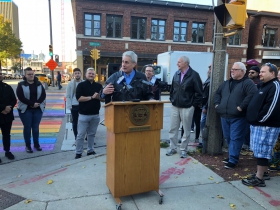 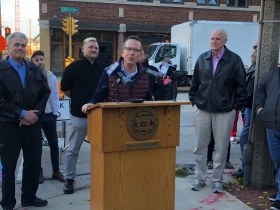 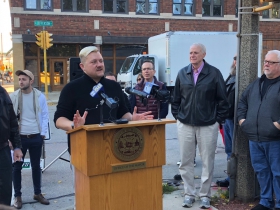 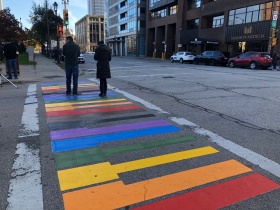