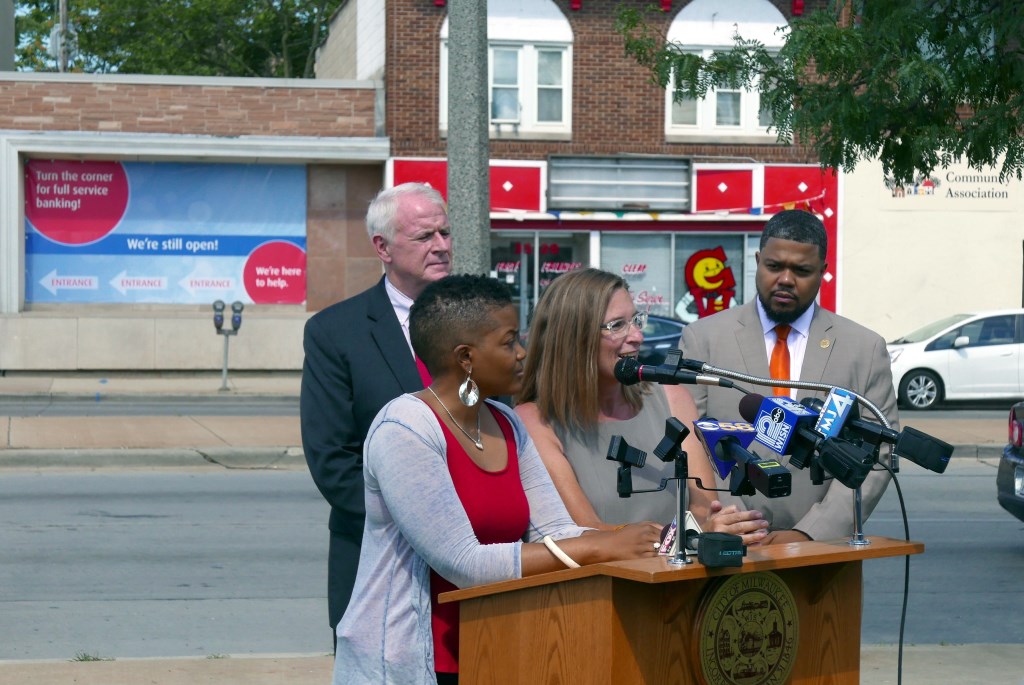 JoAnne Sabir and Juli Kaufmann speaking about the Sherman Phoenix project with Mayor Barrett and Ald. Rainey in the background. Photo by Graham Kilmer.

When it comes to breathing renewed life into Milwaukee neighborhoods hoping for a rebound, there is no hard-and-fast rule.

But a group of local entrepreneurs who have poured blood, sweat, tears and a lot of passion into rebuilding some of the city’s most disenfranchised, struggling areas say one aspect is clear — relationships are front and center in the effort.

Mike Gousha, distinguished fellow in law and public policy at Marquette University, discussed neighborhood revitalization with three business leaders within the community for his most recent On the Issues installment Wednesday. 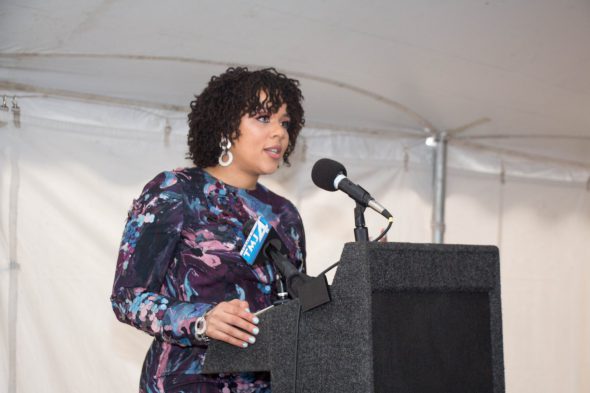 Melissa Goins at the groundbreaking for the Garfield Street School redevelopment and The Griot Apartments. Photo by Justin Gordon.

The trio of women has a growing list of personal and professional accomplishments, including several high-profile projects that are underway.

Kaufmann and Sabir are part of the team bringing to fruition the Sherman Phoenix project at the site of the since relocated BMO Harris bank branch that was set on fire during the 2016 unrest at 3536 W. Fond du Lac Ave.

The size and scope of the work the entrepreneurs have taken in various sections of the city has varied, but there are common threads, they say, including the fundamental need to be creative as funding enters the equation.

“There are tons of structures in place that are barriers to success,” Kaufmann said as she rattled off such challenging headwinds as little to no access to capital, the financial sector’s unwillingness to lend money and low property values.

Somewhat in jest, Goins adds, “I would say, in layman’s terms, the system just sucks. We have to look to ourselves and say, ‘What works?’”

When it comes to projects such as Sabir’s brainchild, Juice Kitchen, 1617 W. North Ave., relationship building was credited as being the number one galvanizing element that brought the concept into reality.

“We were called to be in a neighborhood where people thought we wouldn’t thrive,” Sabir said.

Instead, the health food restaurant serves an average of 500 persons daily and, as Sabir proudly proclaims, consists of a clientele representing a range of personal and professional backgrounds.

Sherman Phoenix, which is slated to open Nov. 30, has in place a roster of 29 tenants, representing the full gamut of small business enterprises. The list includes a yoga studio, hair salon, coffee shop and a vegan restaurant.

Sabir and Kaufmann said they had high hopes as they looked to bring new development to the scarred site, but the outpouring of support and interest surpassed even their visions.

“We know it’s going to be successful because it’s not transactional — it’s relationship built,” Kaufmann said. “We’ve seen so much response to this beautiful, beautiful opportunity.”

As for Bronzeville, Goins said the groundswell of support taking place in the neighborhood is one she hopes will be replicated across other areas of Milwaukee in the road ahead.

“I have these ideas and these moments and these spiritual ideas that drive me into motion,” Goins said. “It is not without a lot of labor of love and a lot of work and a lot of donor support.”

Goins, Kaufmann and Sabir emphasized throughout the hour-long discussion the work has never been easy — but the rewards, they say, have been overflowing and abundant.

“You need to be the change,” Kaufmann said. “I’m really just trying to make Milwaukee better place, using real estate as a tool.”