New Symphony Home Will Be Incomplete 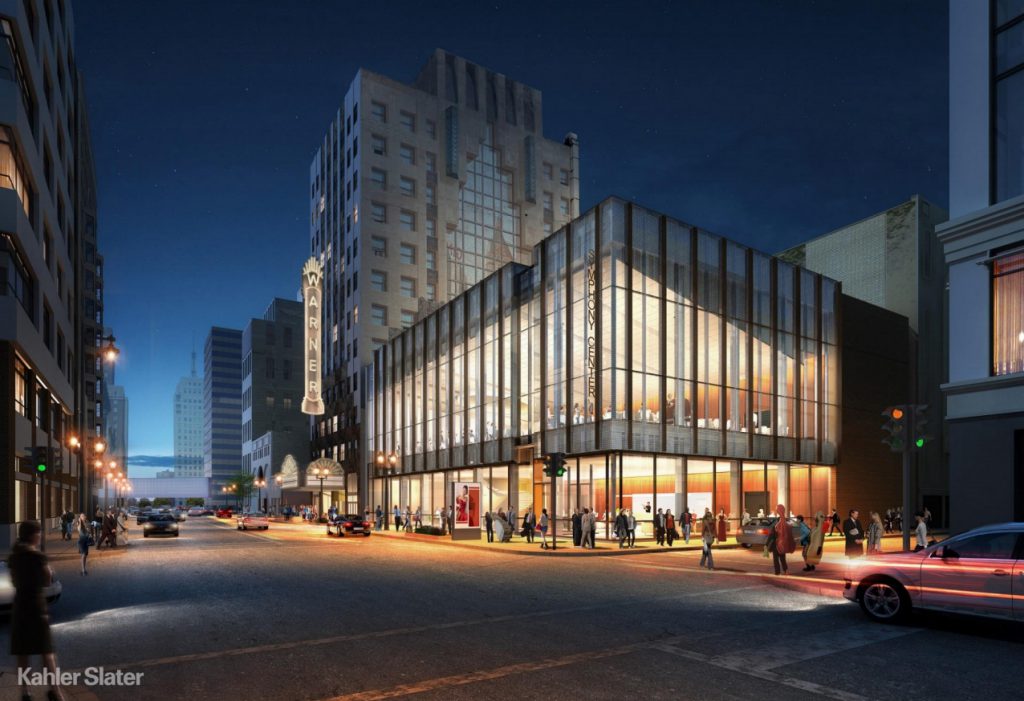 The extensive September 30 Milwaukee Journal Sentinel coverage of the Milwaukee Symphony Orchestra’s future home (A day in the life of MSO’s new concert hall), coupled with recent MSO promotion of its November 9-10 performances of the “thundering organ symphony“ of Saint-Saëns, raises serious concerns about the absence of a pipe organ from this major project. If you attend these upcoming concerts you will witness one of Milwaukee’s final opportunities to experience the dynamic and emotional impact of full orchestra with pipe organ – a significant part of major symphonic repertoire that has never been adequately represented on the MSO stage.

The symphony has confirmed that it currently has no plans to include a pipe organ in its new home, perhaps at least partially because of its own minimal experience with performing this powerful and majestic repertoire. (The Miller Organ in the symphony’s current home in the Marcus Center’s Uihlein Hall has been used rarely because of its unfortunate installation under the stage.) The occasional use of a digital organ as a substitute has not proven satisfactory because it does not provide a quality and presence of sound sufficient to support and enhance the impact of the orchestra. Many dozens of major orchestral compositions feature the pipe organ in a leading role, representing virtually every musical period, and including significant contemporary commissions. Hundreds more, including major choral works, include pipe organ in their orchestrations. Additionally, thousands of works for solo organ, or organ with soloists and chamber ensembles of all types and sizes, should be part what a major concert hall offers to its audience. We need look no further than Madison for an example, or to Kansas City, Atlanta, Dallas, or Los Angeles.

“Going Organic!” in the Spring 2012 issue of the League of Symphony Orchestra’s professional magazine (page 30) highlights the resurgence of pipe organs in concert halls:

. . . With the new energy being tapped in concert halls and fresh thinking about the instrument across generations of composers, audiences are discovering that the organ can mean a lot more than they may have assumed. “When you celebrate the sheer glory of its sound, which is not in the service of anything else but music,” says the LA Phil’s Chad Smith, “it’s a visceral experience that shakes you to your core. You feel it as much as you hear it.”  Please check out the entire article online here (click on Full Screen).

The MSO’s new hall can be expected to serve for the next century, and should proudly signal that Milwaukee is a major-league city – finally with a major-league concert hall worthy of its major-league orchestra. Yet the lack of a significant pipe organ, as found in most major concert halls throughout the country, will limit the experience of not only the performers and audience, but also limit the appeal of this situation for adventurous future music directors.

The acoustics of this vacant theater are what attracted the symphony players in the first place, but the musicians won’t actually be playing in that space. They will be playing on a new stage built out over North 2nd Street, requiring projection of their sound into the auditorium. The presence of a well-designed pipe organ will not only add body and brilliance to that sound when it is played, but will also help direct the orchestra’s sound out to the audience when the organ is silent. An imaginative physical design of the organ can also add visual impact and identity to the space.

Ideally, the cost of a pipe organ would have been included in the initial fund drive. Typically, a named gift from a corporate or family foundation would fund the instrument, with additional sources contributing to an endowment to ensure its maintenance and regular programming, possibly including an organ curator to advocate for its use and care. But once conversion of the building it completed, without benefit of a consultant’s advice about the structural requirements for a specific organ design, it is highly unlikely that a suitable instrument will ever be installed.

The inclusion of a pipe organ in the conversion plan of this hall would likely add 3-4 percent to the total investment, while not only increasing the quality and variety of what the orchestra can deliver to its audience, but also opening the door to countless opportunities for expanded use of the facilities for choral concerts, educational programs, recitals, silent movies, singalongs, and other private and community gatherings to help meet the goal of increased accessibility and revenue.

Time to correct this unfortunate omission is running out. With the new hall scheduled to open in less than two years, immediate action will be required to encourage the MSO to expand its vision to include a pipe organ, engage a consultant, develop a funding strategy, and commission a new instrument or find a suitable existing instrument (perhaps even the soon-to-be-abandoned Miller Organ from the Marcus Center.) Technical resources are readily available, nationally, regionally, and locally, to accomplish these tasks.  One excellent source of information is the Associated Pipe Organ Builders of America (apoba.com). And I am optimistic that the Milwaukee philanthropic community has the capacity and imagination to fully fund the resources for an optimal symphonic conversion of this hall.

I am among those who have had serious fiscal and logistical concerns about the MSO’s planned move. Now that the project is underway, I am doing what I can to ensure its success, in the interest of fully delivering on the potential of this major investment in the cultural and economic future of Greater Milwaukee.

If you share my concerns, and especially if you are in a position to make or solicit a contribution, I urge you to personally make the case to the board and staff of the MSO for inclusion of a pipe organ in their new concert hall.

Please feel free to quote from this column, or forward this information to others who may support this action.

2 thoughts on “Op Ed: New Symphony Home Will Be Incomplete”