By Isiah Holmes, Wisconsin Examiner - Oct 15th, 2018 05:36 pm
Get a daily rundown of the top stories on Urban Milwaukee 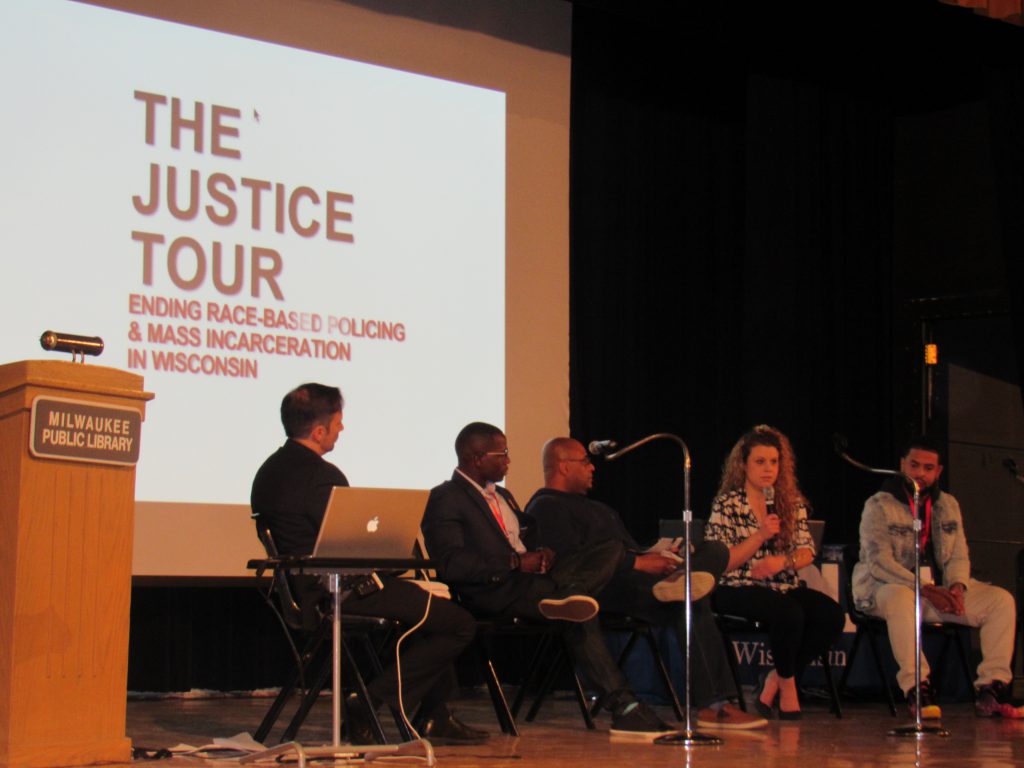 Inequitable treatment of minorities by the justice system was the topic Saturday at the American Civil Liberty Union’s Justice Tour, held at the Downtown library. It was also the topic, in a slightly different way, at a Red Table Talk held at UW-Milwaukee a week before this.

The ACLU event was held in the Centennial Hall of the Milwaukee Public Library, near Wisconsin Avenue and 8th St., and, appropriately, not far from the Milwaukee Police Department’s District 1 headquarters, the county jail, and courthouse. Speakers included ALCLU attorneys, members of various community organizations, university professors, former incarcerated people and many others. The main focus was the ACLU’s stop-and-frisk lawsuit against the Milwaukee Police Department. 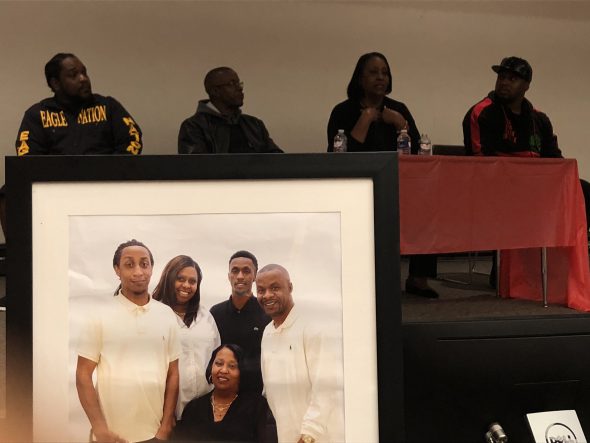 The department is now required to pursue reforms, and Tammy Rivera, a speaker at the Justice Tour, explained that each of Milwaukee’s communities is also being surveyed on the reforms. She stressed that a  diverse survey selection is gathering information across demographics: “From the Hmong communities, to African Americans, we wanted to make sure everyone’s voice was heard,” she said.

Rivera, who is executive director of South Side Organizing Committee, noted that reform is tough to institute: “government bureaucracy is just brutal to deal with,” she noted. Yet she remains encouraged. “It’s the first time in Milwaukee’s history that we have this many people of color in power,” she told the crowd of over 80. She included Milwaukee’s new police chief Alfonso Morales in this statement.

The event also discussed ACLU’s Smart Justice Campaign to cut Wisconsin’s incarceration rates by half. In a country with the world’s highest incarceration rates, Wisconsin leads in the detention of African Americans. One speaker, Dr. Rob Smith, director of the Center for Urban Research, Teaching and Outreach at Marquette University, traced the problem to “the system of slavery that taught this country to criminalize black people.” He continued, “America has profited from that criminal justice system for centuries.”

Melissa Ludin, a panelist and Board President of EXPO (Ex-Incarcerated People Organizing), noted that women are also particularly victimized by mass incarceration. “The biggest thing that’s fueled the mass incarceration of women is the drug war,” she told the crowd. Ludin explained that drug problems for women which earn them jail time are often rooted in trauma and abuse. Almost always, she said, that abuse comes from loved ones.

Smart Justice campaign organizer Sean Wilson shared a story of a woman he knew who was victimized by parole. He explained how she went to her parole officer asking for drug treatment after a relapse. Instead, she was detained.

Chad Alexander, an outreach specialist at Milwaukee Fatherhood Initiative, spoke about the plight of people on parole. If someone on parole is accused of any wrongdoing, even unfounded, he noted, “that person has a choice. They can go in for 21 days while their parole officer investigates, or they can go against that P.O.” Following the rules in this circumstance and being detained for 21 days often results in people losing hard earned jobs. This is an outmoded practice that’s behind the times, he said: “It seems like we’ve been stuck in 1980 with the Department of Corrections.”

While much of this involves state policy, Milwaukee’s jails and detention centers have become notorious in recent years. The Milwaukee County Jail has been immersed in controversy, including the death of 38-year-old Terrill Thomas in 2016, who died of dehydration after being locked in a solitary cell without water, for a week. Also controversial has been the Milwaukee Secure Detention Facility (MSDF), which houses parole violators. MSDF is notorious for being overcrowded, while also keeping prisoners inside their cells for 20 hours or more. On October 8th a movement against the facility, Close MSDF, hosted it’s annual MSDF Anti-Anniversary. It’s held on the day MSDF opened it’s doors in 2001, and honors the 17 people who’ve died there.

Wilson offered a summary of sorts of what’s happening in Wisconsin: “We, in little old Wisconsin, are competing with the world in incarceration,” he noted.

A week before this, on October 4th, the Kappa ETA chapter of UW-Milwaukee’s Delta Sigma Theta Sorority hosted a Red Table Talk. The meeting of nearly 40, mostly young African American students and residents, discussed the state of social justice in Milwaukee. Featured speakers were Linda and Jay Anderson, Sr., parents of 25-year-old Jay Anderson, Jr., who was shot and killed by a Wauwatosa PD officer in 2016.

Other speakers included local activists and organizers Tory Lowe, and Vaun Mayes. Mayes has been indicted for an alleged attempt to firebomb MPD’s District 7 during the 2016 unrest in Sherman Park, though scores of community members have voiced support for him.

The evening began with a brief discussion of the Jay Anderson, Jr. shooting and its many lingering questions. On June 23, 2016, Anderson pulled into Madison Park to sleep off intoxication instead of risking a drive home. He was approached by Wauwatosa officer Joseph Mensah while still asleep. Mensah, who claims Anderson reached for a gun while his hands were up, shot several fatal shots. The officer was cleared of the shooting, and the family feels their son’s case was “swept under the rug.”

“He was a threat to no one,” Lowe proclaimed to the crowd.

Lowe and Mayes stressed to the youthful crowd that it’s critical they organize for issues important to them. While voting is important, this isn’t the only thing they can do. “Every day you’re on your phone, learn a new law,” Lowe said.