For starters, most of it goes to millionaires.

By Tamarine Cornelius, Wisconsin Budget Project - Oct 12th, 2018 10:44 am
Get a daily rundown of the top stories on Urban Milwaukee 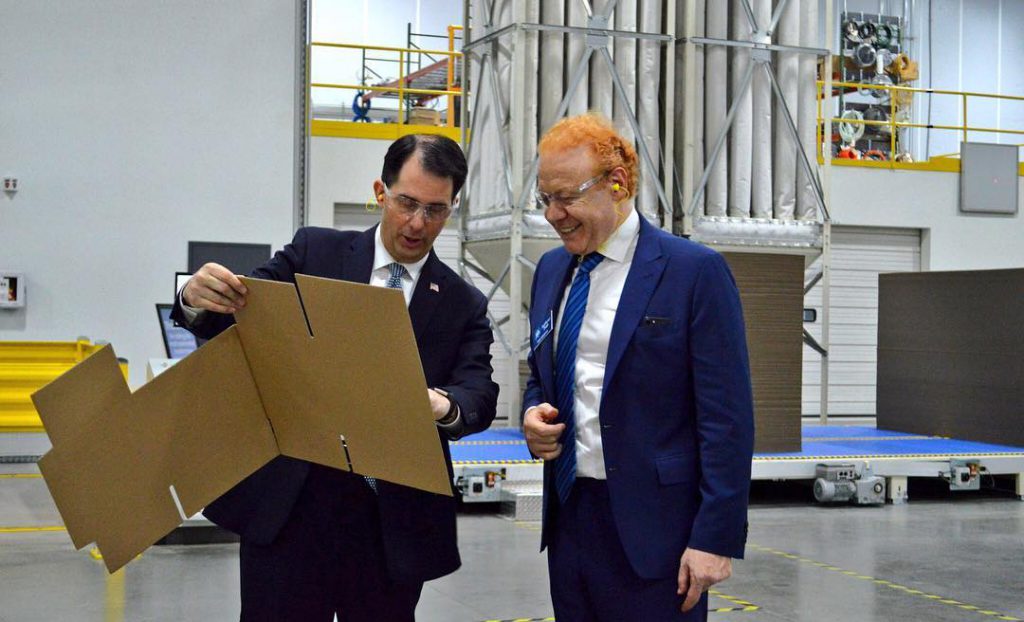 Gov. Walker at Pratt Industries for the ribbon cutting of their new manufacturing facility. In may 2015, the Wisconsin Economic Development Corporation approved a $1.75 million loan and $2.4 million in job tax credits for the project. Photo from the State of Wisconsin.

Wisconsin lawmakers should eliminate a recent tax credit that allows manufacturers and some other businesses to pay next to nothing in income taxes, has ballooned far beyond original cost estimates, and has done little to promote job creation.

Here are six reasons the Manufacturing and Agriculture Credit is a poor use of public resources:

1. It strips resources from important public priorities that are vital to the economic well-being of businesses and families.

Businesses and families in Wisconsin both need the same things in order to thrive: safe communities, a solid transportation network, excellent public schools, accessible health care, and affordable higher education. These priorities require the investment of public resources—investments that are threatened when we redirect resources that should broadly benefit everyone in Wisconsin and instead funnel those resources into the pockets of a few wealthy, well-connected individuals and businesses.

The Manufacturing Credit has reduced public revenues by $1.4 billion since it began in 2013, costing $334 million in fiscal year 2019 alone. That’s money that should have gone to building on the progress Wisconsin has made in improving access to health insurance, working to reduce the need for juvenile correctional facilities, and making higher education affordable for all Wisconsin residents. Instead, those resources were channeled to a select few—only about three out of every thousand individual income tax filers receive the credit.

The Manufacturing Credit is stacked in favor of giving extremely large tax cuts to the very highest earners, virtually shutting out everyone else. How tilted is the credit? Most of the tax credit was paid out to millionaires. Tax filers with incomes of at least $1 million make up just 0.2% of Wisconsin tax filers, but they claimed 76% of the credit in 2017. 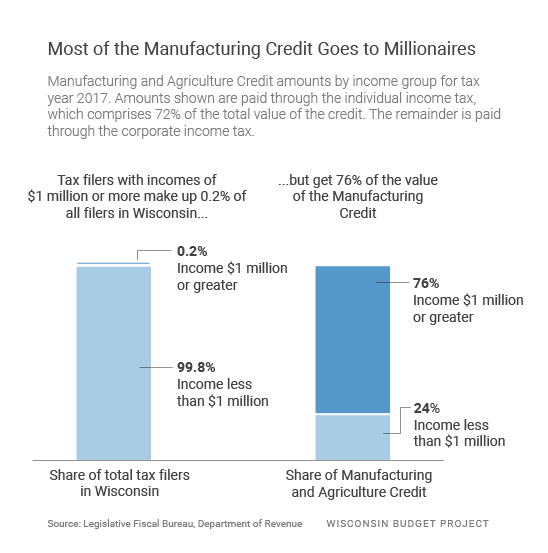 Most of the Manufacturing Credit Goes to Millionaires

Here’s another way of looking at how tilted the credit is in favor of the very rich: In 2017, there were 11 tax filers who claimed the credit, each of which had incomes of $30 million or more. Those 11 tax filers got an average tax cut of $2 million each.

3. It requires no job creation.

Companies do not need to create new jobs to claim the credit. Even manufacturers that lay off workers, send jobs overseas, and close factories can receive the credit. 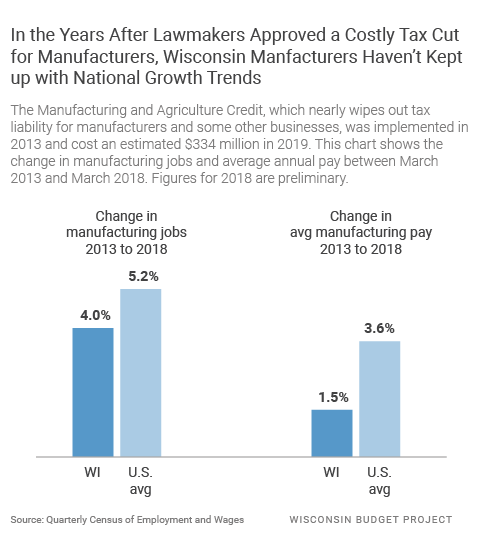 In the Years After lawmakers Approved a costly Tax Cut for Manufacturers, Wisconsin Manufacturers Haven’t Kept up with National Growth Trends

4. It’s costing more than double what lawmakers thought it would.

The cost of the credit has swelled far beyond the amount that lawmakers anticipated whey they passed the tax break, for a cost overrun of nearly $800 million over seven years.

When lawmakers passed the tax break, the original estimate was that the tax credit would cost $617 million over seven years. More recent estimates show the cost of the credit has ballooned far beyond the original expectations, reducing public revenues by $1.4 billion between 2013 and 2019, more than double what the cost of the credit was originally predicted to be. That means state legislators could cut the credit in half and still give manufacturers a bigger tax cut than was originally intended. 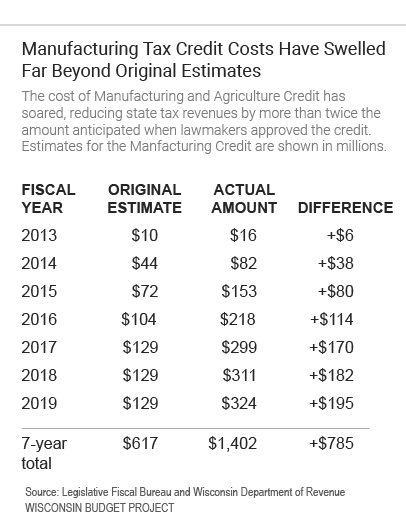 5. It picks winners and losers among Wisconsin industries.

All Wisconsin businesses depend on public investments in roads, the workforce, and communities to thrive. But manufactures get a special exemption from paying their fair share for the cost of these public investments. The Manufacturing Credit means manufacturers pay next to nothing in state income tax, the biggest source of revenue for important public services. In fact, a recent investigation showed that Kimberly-Clark paid an average of 25¢ a year in state income tax over the last four years for which figures are available. 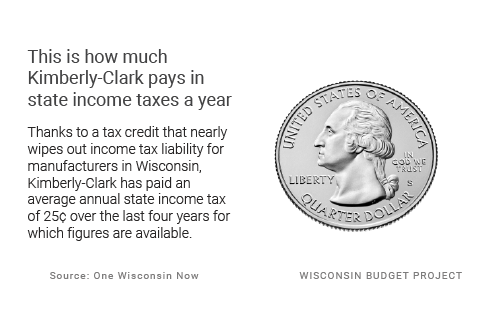 The manufacturing sector is an important part of Wisconsin’s economy, but that doesn’t mean they should get a pass on paying for the public services the business needs. Giving them a special tax break gives manufacturers an advantage over similarly situated businesses in other sectors of the state’s economy.

While both manufacturers and agricultural producers can receive the credit, the bulk of the tax cut goes to manufactures. In the past, about $5 out of every $6 of the credit has gone to cut taxes for manufacturing businesses, rather than to farmers. That means that Wisconsin farmers are mostly left out of this credit, even though the name of the credit includes both industries.

The Manufacturing and Agriculture Credit is set up in a way that allows individuals and corporations to receive very large tax breaks without creating a single new job. If state lawmakers want to take a more effective approach to helping Wisconsin businesses thrive and hire more workers, they should take the tax revenue lost to the credit and instead use it to make meaningful investments in the state’s workforce, transportation infrastructure, and higher education system.