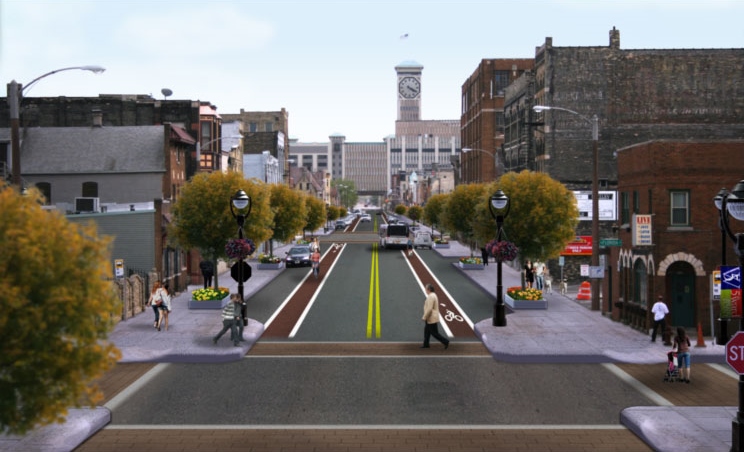 This rendering of S. 2nd Street includes a variety of features of a “Complete Street.” Many, such as wider sidewalks, street trees and bike lanes, were incorporated in the streets’ reconstruction in 2010. Rendering by Kieran Sweeney.

A new city policy is intended to make streets substantially safer for more than just drivers of motor vehicles.

A proposal to adopt a Complete Streets policy had its first hearing Wednesday morning before the Common Council’s Public Works Committee.

According to the proposed ordinance: “Complete Streets are defined as facilities that are safe, comfortable and convenient for users of all travel modes, including walking, use of mobility aids, bicycling, riding public transportation, and driving motor vehicles.”

“We are really pulling the resources together throughout the city that when we look at designing streets… we account for the most vulnerable users,” said Department of Public Works coordination manager Karen Dettmer. The ordinance establishes a broad committee of city stakeholders to review street reconstruction or repaving projects. While many streets would receive curb bump outs, wider sidewalks, painted or protected bike lanes or other traffic calming measures, “some streets will look very much like they do today,” said Dettmer.

The committee unanimously supported the proposal, and committee chair, Alderman Robert Bauman, predicted the full council would vote unanimously to adopt the policy.

But Bauman also expressed concern that state law may hamper the success of the policy. The city has to comply with state law, which dictates following the national Uniform Traffic Control manual, and also must contend with any rules related to the state funding up to 80 percent of the construction costs on the many state highways in the city.

“So the viewing public knows, most of the major road projects are state projects,” said Bauman, citing projects like the ongoing repaving of Wells Street and reconstruction of W. Wisconsin Ave.  The state rescinded a very prescriptive Complete Streets policy in 2015 under a budget proposal by Governor Scott Walker.

City Engineer Jeff Polenske responded: “what we’ve heard from the [Wisconsin Department of Transportation], with or without their own policy, if the city has a policy that is something we can apply to our projects.”

Ald. Michael Murphy expressed concern about DPW design engineers. The attitude of some, he suggested, is “I have a traffic manual handbook that was printed by God. I have to follow that handbook because it’s what’s in the handbook.”

Bauman echoed such concerns: “For the 15 years I’ve been on the council I’ve always been pushing this stuff and there has always been pushback. “I certainly support this (Complete Streets policy) and hopefully it has some impact.”

Polenske attempted to assuage their concerns: “We’ve started to make some changes within our department. We have implemented a multi-modal unit… Part of this is to really start initiating a training effort so that there is a really a baseline of what this policy means.”

Kovac noted that some changes, including the recent addition of protected bicycle lanes over two bridges, were wins for everyone involved, while others will negatively impact the ability of motorists to speed.