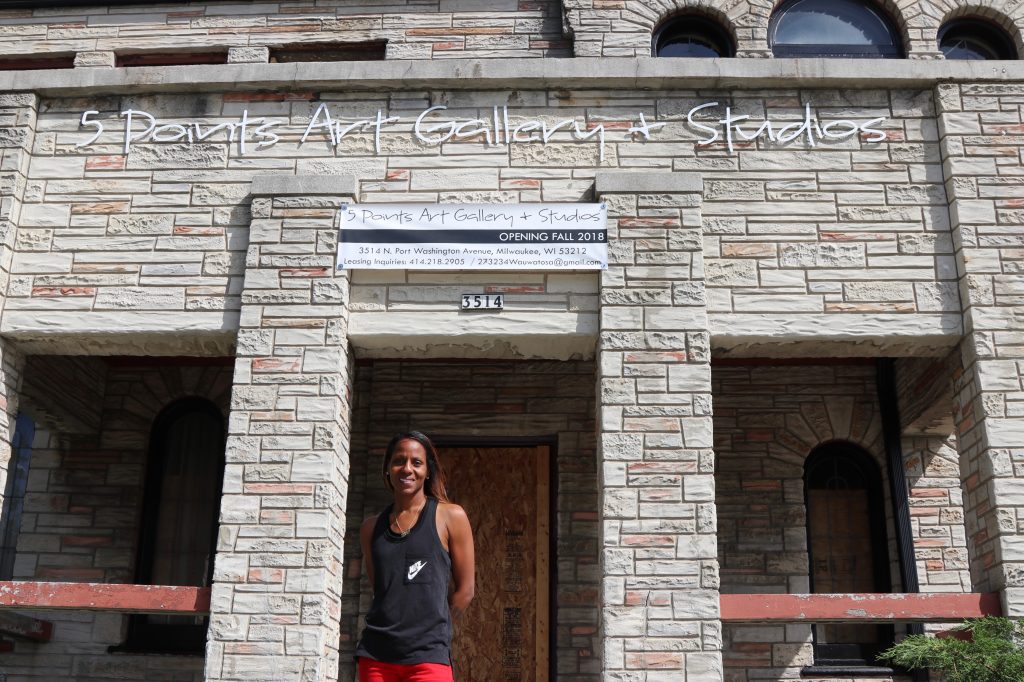 Doors Open Milwaukee is an annual event sponsored by Historic Milwaukee that provides tours of historic or influential buildings to the public. This year’s Doors Open, taking place on Sept. 22-23, is highlighting King Drive as a “spotlight neighborhood.” Below are some of the featured sites.

Marquita Edwards, founder and director of the King Drive Commons Gallery and Studio, spends her time searching for diamonds.

Through Doors Open Milwaukee, Edwards hopes to showcase these “diamonds.”

Edwards has spent the last 10 years creating an inclusive art gallery where members of the Harambee community can exercise their creativity.

With the help of the Martin Luther King Economic Development Corp. (MLK EDC) and its late director, Welford Sanders, she began looking for African-American artists who did not have a venue to display their art.

According to Edwards, “The vision is … to give everyone something they can feel good about — something that’s going to raise the sense of worthiness and being part of a community.”

Sandra Mitchell, an artist and Harambee resident, said, “I was overwhelmed with joy to find out that there was a place like this in the neighborhood. I love art!” 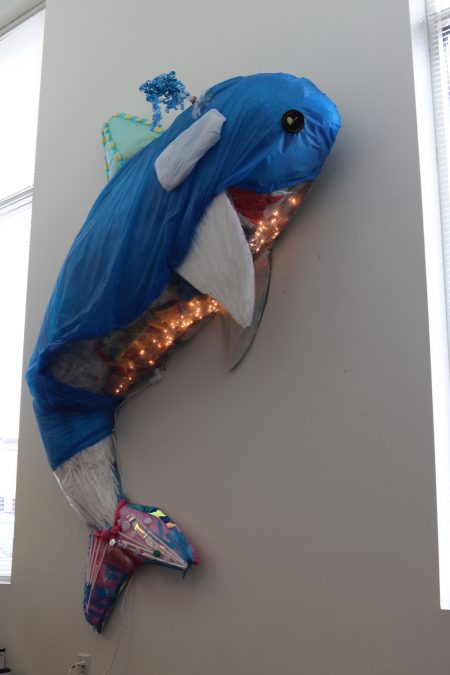 Marquita Edwards, Sandra Mitchell and Yawei Sun designed “A Whale of a Tale,” entirely out of trash. Photo by Max Nawara/NNS.

Last summer Mitchell worked on a collaborative piece with Edwards and artist Yawei Sun to shed light on the damage that pollution is doing to the earth. The piece, a blue whale made completely from trash, is titled “Whale of a Tale.”

In addition to community involvement, Edwards focuses her efforts on education. “I’ve worked as an elementary teacher, I’ve worked as a preschool administrator. I have a knowledge of how important learning is at all ages,” she said. She hopes that the Doors Open Milwaukee event will help her educate both children and their parents.

This art gallery and studio space, formerly a funeral home, is bustling with life.

Fatima Laster is blending the old with the new as she remodels the Johnson-Goolsby funeral home into an art gallery, convention space, commercial kitchen for catering events and 24-hour art studio. The cream-brick building is located at the intersection of Keefe Avenue and Port Washington Avenue in the Harambee neighborhood.

“I want to preserve this history,” said Laster. She is remodeling the roof and sectioning off the parlor and basement into studios, but she plans to keep the original brick facade, ornamental archways, stone fireplaces and dumbwaiter for carrying supplies.

Laster said that people have told her that they don’t know anything about art. She hopes that the Doors Open Milwaukee event can change that.

“I want to raise awareness and expose art to the community,” she said. “My goal is to show people that there are jobs in art.”

Laster hopes to host local, national and international artists of color, and eventually host events such as the Milwaukee Film Festival.

“I want to be able to show people that somebody who looks like me or identifies with me can do something like this,” she said.

While the gallery is not yet finished, Laster hopes construction will be complete this fall. She will offer tours of the unfinished gallery for Doors Open Milwaukee from 10 a.m. to 5 p.m. on Sept. 22 and 23.

She plans to educate visitors on the history of the building, as well as her vision for the gallery.

“Everyone is welcome,” stated Laster. “The mission is not to exclude, but to elevate.”

Daphne Jones, president of Glorious Malone’s Fine Sausage, dreamed of keeping her mother’s legacy alive in Milwaukee. Today, the business is not only alive, but thriving.

Glorious Malone’s, now located on the corner of Dr. Martin Luther King Drive and Walnut Street, started in the kitchen of Jones’ childhood home. Her mother, Glorious Malone, was known for her specialty cold cut called head cheese. Jones said that her mother and father made head cheese as a gift of love for friends and family during the holiday season. 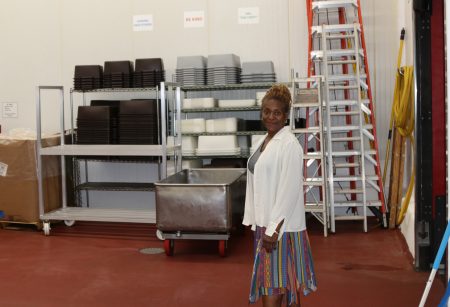 “They enjoyed making it and they enjoyed giving it,” said Jones. “Before you knew it, we had a lot of production in the kitchen. Our first manufacturing place was in the kitchen in our home!”

According to Jones, it didn’t take long before her family realized they had a product they could sell. The family business continued to grow, but Malone never strayed from her roots.

“She (Malone) could have gone anywhere but she wanted to stay here,” said Jones, referring to the current Glorious Malone’s location. “She wanted to build here because she wanted people to see that if she could do it, they could do it. She wanted what she was accomplishing to be an inspiration … She wanted to be that spark.”

Like her mother, Jones values her product and her community.

“I don’t only get to make something that’s very good, wholesome, natural and delicious. I also get to keep going forward and to be able to use this as a platform to speak to people about accomplishing, dreaming, wishing and trusting,” said Jones.

Jones plans to use Doors Open Milwaukee to inspire others and teach them about her mother’s legacy.

Other Doors Open sites on King Drive are listed below.

All Peoples Gathering Lutheran Church in Harambee was originally built in 1906 under the name Epiphany Lutheran Church. The church prides itself on a commitment to inclusiveness and social justice. It will be open for Doors Open Milwaukee on Sunday, Sept. 23, from 1:30 p.m. to 5 p.m.

America’s Black Holocaust Museum, which closed its doors in 2008 to move to a virtual museum, is reopening late this fall. The museum’s goal is to build public awareness of the harmful legacies of slavery in the United States and to promote racial repair, reconciliation and healing. It will be open to the public on Saturday, Sept. 22, from 12 p.m. to 5 p.m.

While Bader Philanthropies was founded only 25 years ago, its cream-brick global headquarters, located between Harambee and Williamsburg Heights, was built in 1927 as office and retail space and was left vacant for a number of years. Bader Philanthropies has invested about $250 million into major social needs with the goal of lifting individuals and communities in Milwaukee and across the world. The Bader Philanthropies building will be open on Sunday, Sept. 23, from 10 a.m. until 2 p.m.

Gee’s Clippers, a long-time favorite of Milwaukee Bucks players and other major league athletes, has relocated to a former bank dating back to the 1930s on Martin Luther King Drive and Garfield Avenue in Bronzeville. The barber shop is filled with sports memorabilia collected by the owner, Gaulien “Gee” Smith. Gee’s will be open to the public on Saturday, Sept. 22, from 10 a.m. to 5 p.m.

What was once the Historical Garfield School, built in 1887, is now home to one-, two- and three-bedroom apartments. Visitors can check out the historic apartment building’s original hardwood floors, tall windows, high ceilings and artist murals on Sunday, Sept. 23, from 11 a.m. until 2 p.m.

Formerly Reader’s Choice, Milwaukee’s only black-owned bookstore, Kindred is now home to an art studio and non-profit organization that provides mentoring, life coaching, social services and programs in visual art, poetry, writing and gardening. The building will be open to the public on Saturday, Sept. 22, and Sunday, Sept. 23, from 10 a.m. until 5 p.m.

This library branch used to be known as Locust Library when it was built in 1971. In 1973, the library was rededicated in honor of the Rev. Martin Luther King, Jr. The library holds a sizable collection of permanent art installations, some that feature Dr. King. The branch is slated to be rebuilt in the near future, so visitors are invited to take a look at the historic building on Saturday, Sept. 22, from 10 a.m. to 5 p.m.

The Nostalgia Home Decor storefront was built in 1902 of Milwaukee cream brick and ornamental wood trim. It became a Historic Landmark after it sustained damage during the 1967 civil rights demonstrations. The owners, Georgette Muilenburg and William Bachle, carry obscure vintage items from the mid 20th century. They also offer a space that holds workshops in textile arts, creating succulent terrariums, knitting classes and poetry. Nostalgia Home Decor will be open on Saturday, Sept. 22, and Sunday, Sept. 23, from 10 a.m. until 5 p.m.

Pilcrow Coffee, named after the symbol for creating a new paragraph, is a small coffee roastery in Bronzeville. Pilcrow’s tasting room and roastery are open for visitors during the Doors Open Milwaukee event. Tasting and tours will be available from 10 a.m. until 5 p.m. on Saturday, Sept. 22, and Sunday, Sept. 23.

St. Marcus Lutheran Church, built in 1914, follows the castle-like Neo-Gothic style of architecture with an elaborate and high altar, a large pipe organ and stained-glass windows showcasing the work of Milwaukee artisans. The church will hold a small Gospel Choir show, pipe-organ recitals, live art exhibits, children’s art activities, a free lunch with a German band and a presentation on beer brewing with a free beer tasting in its café. It will be open on Saturday, Sept. 22, from 10 a.m. until 5 p.m. and on Sunday, Sept. 23, from 7:30 a.m. until 12 p.m.