Milwaukee County is currently evaluating the possibility of relocating South Shore Beach to improve its water quality and the general experience of beach goers.

South Shore is ranked among the worst freshwater beaches in the country in terms of water quality. It sits just south of a boat mooring and behind a breakwater, it has a small sand beach and a small gravel beach. And after rain events the water is rarely safe to swim in.

“We still have way too many beach closures in South Shore Park,” said County Supervisor Marina Dimitrijevic, whose district encompasses the park. “That red flag that we all see is flying way too much.”

The federal Great Lakes Restoration Initiative and state DNR awarded $350,000 to Milwaukee County to study water quality and options for relocating the beach.

South Shore Beach faces a “perpetual sources of pollutants,” said Rob Wright, a principal and civil engineer with SmithGroup, the architecture and engineering firm hired by the county to work on the project. Major issues with water quality are stormwater runoff, excrement from birds, combined sewer overflows, motor oil from the boat mooring and the levels of the existing current.

The UW-Milwaukee School of Freshwater Science has been studying South Shore Beach, which is actually two beaches, and has found the gravel beach, about 500 feet south of the sand beach, has significantly better water quality. The greatest contributing factor to the increased water quality is simply the gravel beach’s proximity to the mouth of the breakwater which provides better water circulation.

“Every time we move south we have better circulation, Wright noted.

Smith Group has developed four plans for a redesigned South Shore Beach and citizens are encouraged to give feedback to the county on them. The county plans to apply for state and federal grants early next year to finance the beach project, Dimitrijevic said.

Wright said the two best design options, when considering the goals of the project, would be the first and fourth ones, because they are further south where water circulation is better. The major difference between one and four is that four is slightly smaller, so it would have slightly reduced construction costs and a smaller footprint on the lake bed.

All four options will include bio-retention stormwater management. This will be like small trenches that are dug and filled with wood chips that have a coating that can treat stormwater, so when stormwater runs toward the lake it passes into the trench and is partially cleaned by the wood chips coating.

The first alternative is the closest to the mouth of the breakwater. It’s the same size as the existing beach, which is just smaller than a football field. And it is the best option for improving water quality, within the area SmithGroup was asked to create designs.

The second alternative is good for beach goers parking their vehicles. It is more centrally located, but still south of the existing beach area. It also has a similar beach size and keeps the gravel beach. But it’s further north on the shore than one and four, and so not the best option for water quality. There’s also the possibility it would end up having its sand blown over the South Shore terrace and Oak Leaf Trail.

This design offers a long narrow groomed beach. This means the southern end of the beach is closer to the breakwater mouth where water quality improves and the northern end is closer to the terrace. It also would not circulate the water as well as options one and four.

Alternative four has all the improvements in water quality as option one, only it is slightly smaller. This option would give the county more wiggle room as officials look to finance the undertaking. 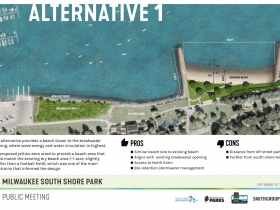 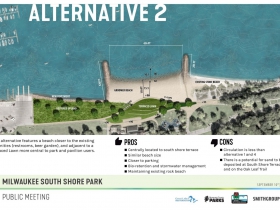 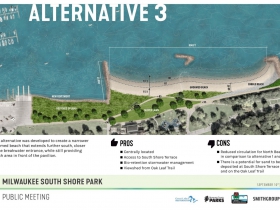 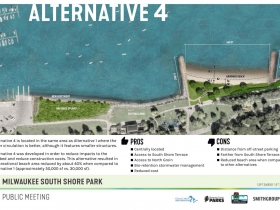