The Youth Council called for a cease-fire over the Labor Day weekend.

By Ana Martinez-Ortiz, Milwaukee Neighborhood News Service - Sep 7th, 2018 11:55 am
Get a daily rundown of the top stories on Urban Milwaukee 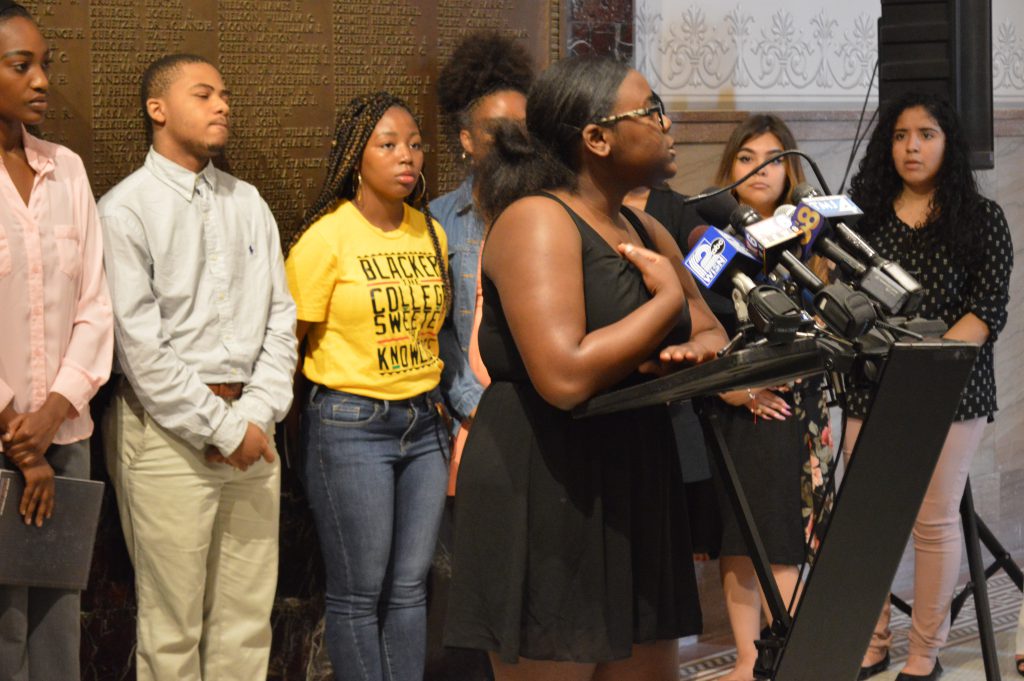 Youth Council President Emoni Gambrell-Toliver says it’s the council’s job to be the voice for youth. (Photo by Ana Martinez-Ortiz/NNS.

The City of Milwaukee Youth Council’s top priority in the upcoming school year is working to curb violence, making the city a safer place for residents, and specifically students and youth.

The council made the decision after 19 homicides occurred in August.

“I’m here today because we fear for our lives,” said Bria Smith, who represents the 6th Aldermanic District. “We fear for the safety of our community.”

Smith has been living in the Harambee neighborhood for the past 10 years. She recalled attending events and gatherings that ended early as the sound of gunshot echoed through the neighborhood. Families would return home with a sense of hopelessness. Smith said that she no longer feels hopeless because of her participation on the Youth Council, whose members are banding together to take a stand against violence.

She attributed part of the problem to the fact that young people have become conditioned to think violence is acceptable. A bullet does not see color, nor does it discriminate, she said. 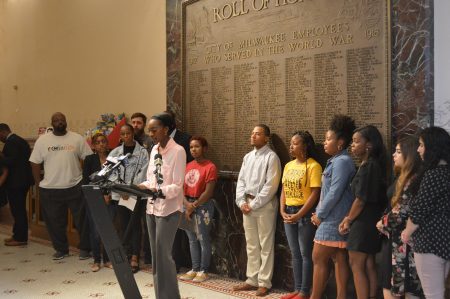 Joya Headley, who represents the 15th Aldermanic District on the Youth Council, speaks at the meeting. Photo by Ana Martinez-Ortiz/NNS.

“The topic and discussion of gun violence isn’t a political issue to be labeled Democratic or Republican,” Smith added. “Gun violence is a human rights issue.”

Several other Youth Council members agreed that the normalization of gun violence needs to be eradicated for the community to thrive.

“[They’ve been] brainwashed and conditioned to be against each other,” said Joya Headley, who represents the 15th District.

Headley, who is entering her second year on the council, believes that community members don’t fully understand the capabilities and power they have when they unite. “It takes a village to raise a child,” she said, quoting the popular phrase. But the “village” needs to invest in nurturing, energizing and bringing up youth.

According to the Milwaukee Journal Sentinel’s Milwaukee Homicide Database, all the homicide deaths in August were from gunshots. Of those deaths, 5 percent of the victims were between the ages of 10 and 17 and 58 percent were between 18 and 29 years old.

The Youth Council called for a cease-fire over the Labor Day weekend. A Milwaukee Police Department spokesperson said there were no gun-related deaths over the long weekend.

According to Reggie Moore, director of the city’s Office of Violence, “The stronger the neighborhoods, the stronger the youth.” The Youth Council and the Office of Violence Prevention joined forces last year to survey residents for the Blueprint for Peace. The blueprint, which was released last November, is a city-wide plan designed by the community to combat the many forms of violence. By continuing to join forces, OVP and the council hope to address gun violence in both adults and youth.

Moore and his team are in the process of creating after-school programs for students and adults, as well as meetings for the victims of gun violence. The programs are intended to teach people how to intervene in a safe way and to recognize if someone is going to flee, fight or freeze.

“We have to be the change,” he said. “We as adults are responsible for the community.”

Although the group plans to organize community meetings and additional programming, Youth Council President, Emoni Gambrell-Toliver, who represents the 3rd District, stated there aren’t any concrete plans yet. Kalan R. Haywood II, a former Youth Council president and state representative elect, praised the council, calling it the face of change.

Right now, the council’s primary focus is to be a voice for youths at a time when leadership is desperately needed. Gambrell-Toliver pointed out that the members’ peers, friends and family members are facing the repercussions of a violent community.

In addition to lending their voices, Gambrell-Toliver also encouraged young people to reach out via Twitter or Facebook if they need someone to talk to.

“If you ever have a problem, if you ever feel like you want to go out and do something crazy; like you need to talk to somebody, we are here to help you,” she said.