The Magic of Lakeshore State Park

There’s nothing else like it in the city. So why is there a plan to change it? 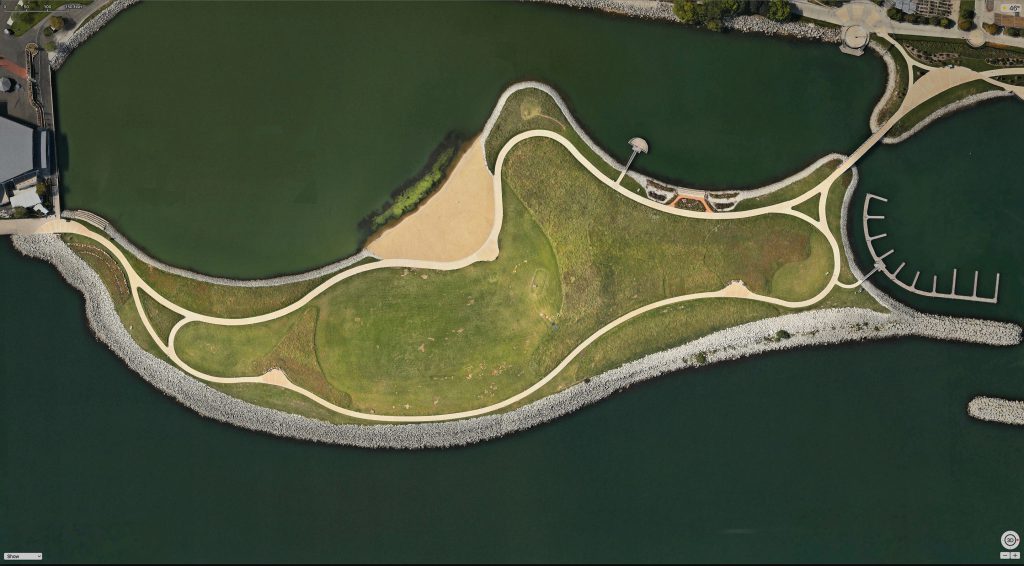 A couple from Waukesha described it to me as “a little piece of heaven.” An artist from UW-Milwaukee said she “feels free here”. Veteran Milwaukee artist Mark Mulhern loves it, too, comparing the island’s shape to a Milton Avery Painting.

None of this was on purpose. The place started out as a pile of limestone and dolomite, a landfill to control erosion excavated from the deep tunnel project in the 1980’s. That became an unexpected feast for birds after weedy plants colonized the site.

Wild states of nature don’t last long in urban environments. In 1991 the City of Milwaukee made the place into Harbor Park. That is, it became a big lawn. What cities do to domesticate vacant lots. 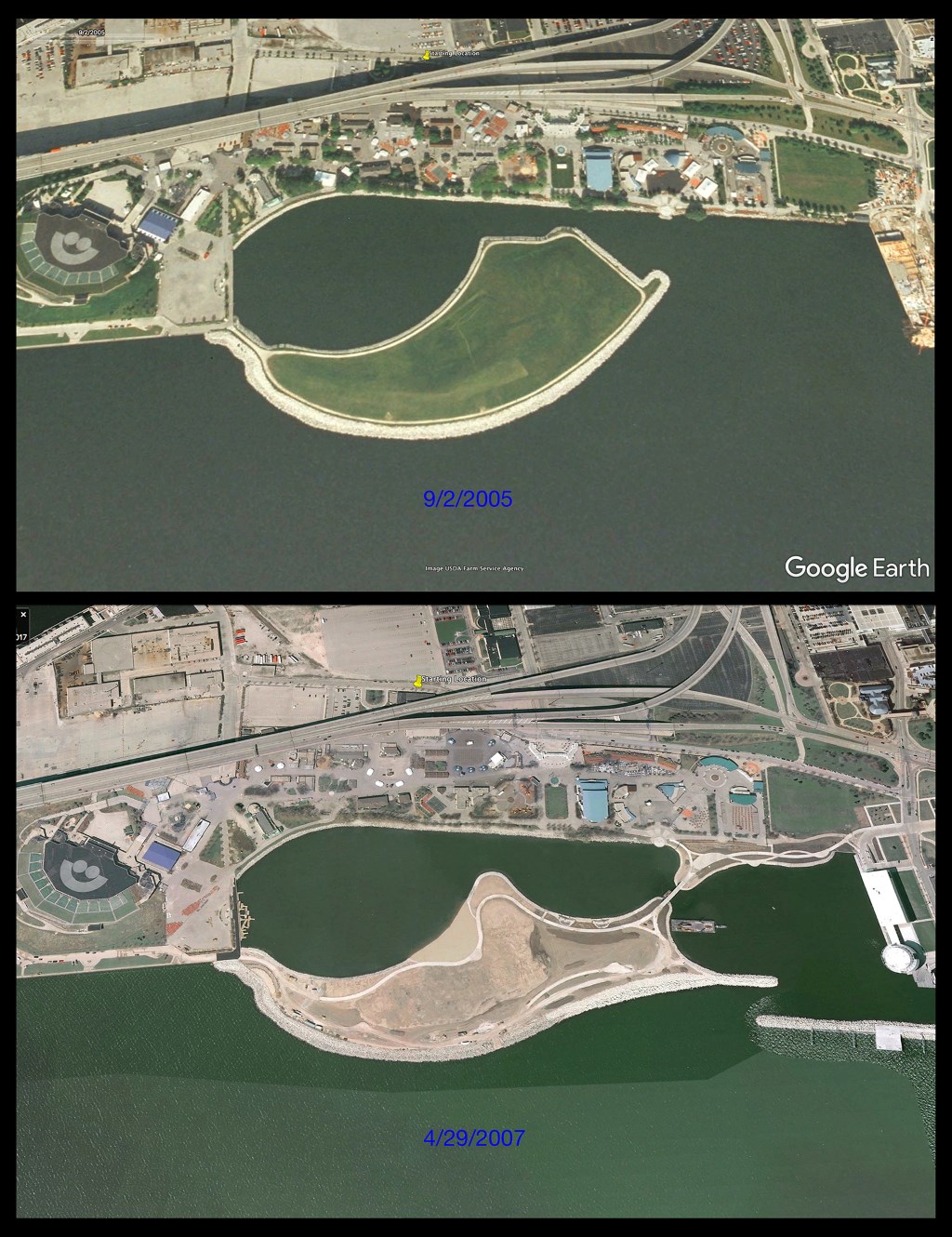 The peninsula became a state park in 2007 when the State of Wisconsin took it over and turned about a third of the space into prairies. That increased the texture of the park and the habitat for wildlife.  And maintenance costs to keep the prairie going. It’s an odd blending of the synthetic and natural worlds.

As you enter the park, just over the bridge from Discovery World, the landscape flattens out into bands and lines that merge with the horizon line suspended in the distance. An austere minimalist landscape frames the immense midwestern sky. Its emptiness provides a huge relief to the city’s dense conglomeration of streets and buildings. 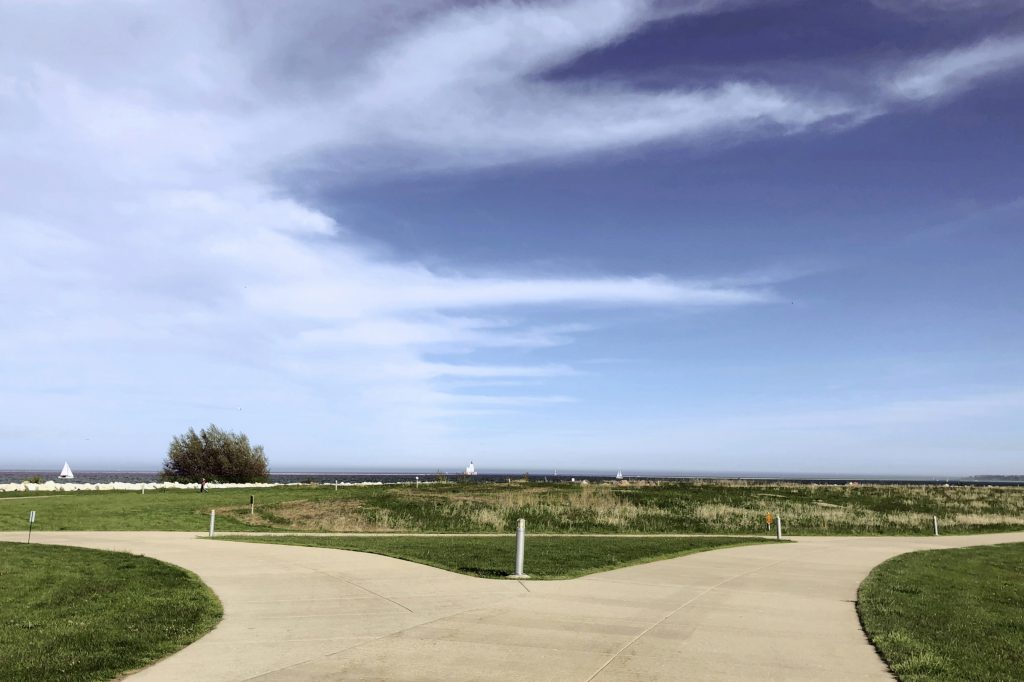 The elevations are only six feet high. An expanse in miniature, more like a model train landscape than anything that happens in nature. Depending on where you stand, the landscape puts buildings — all of Downtown — on a pedestal.

This void makes a panorama out of the lake, sky and city. A sweeping landscape leaves everyone alone including the birds that swirl above the tall grasses. 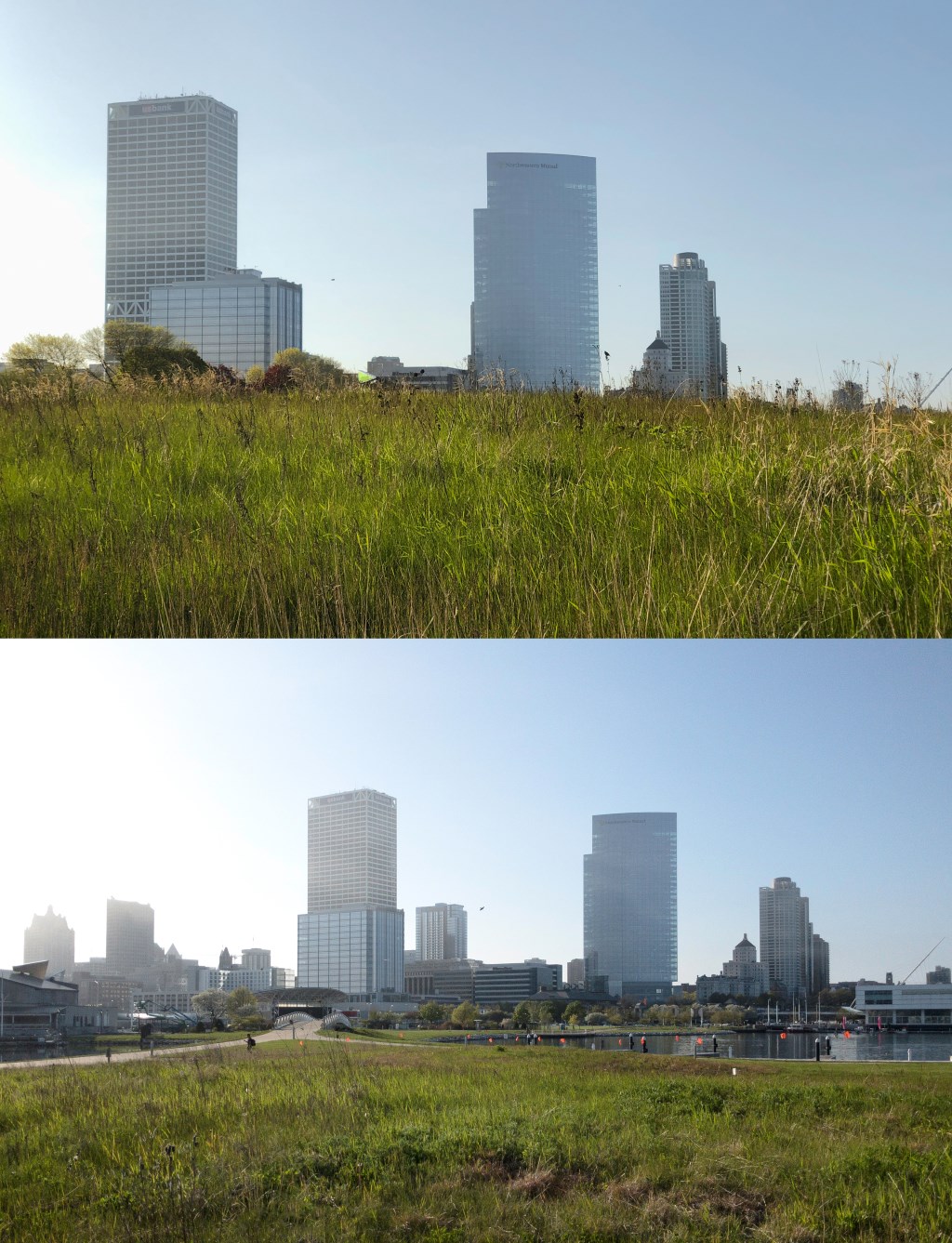 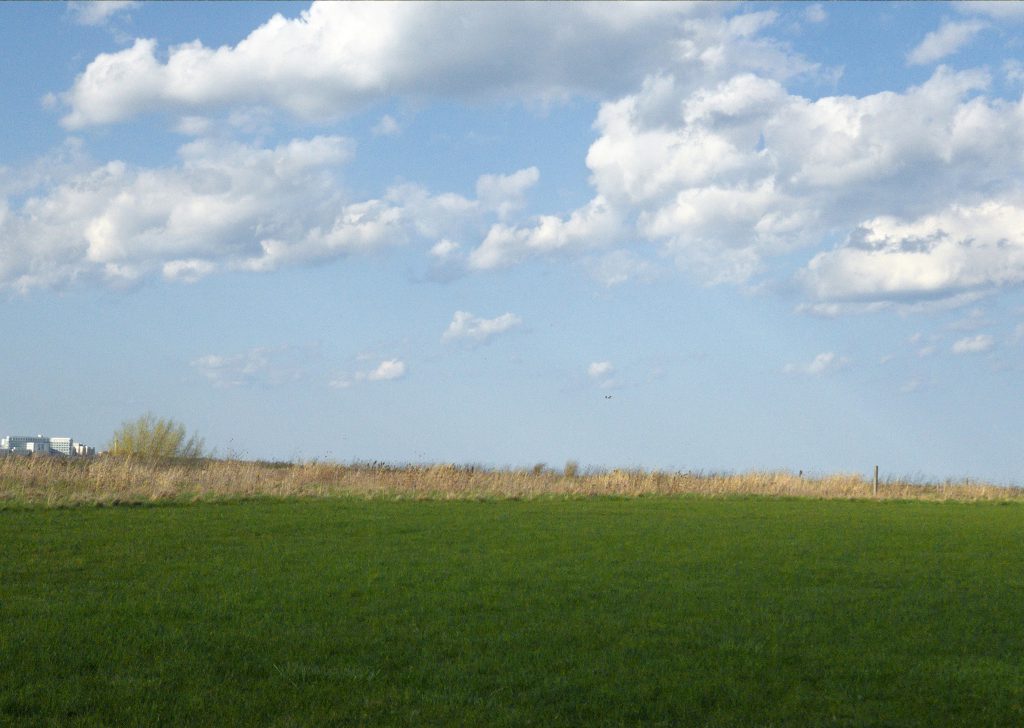 Lakeshore State Park lends itself to abstraction. Sometimes the sky is illuminated so you can see the light. 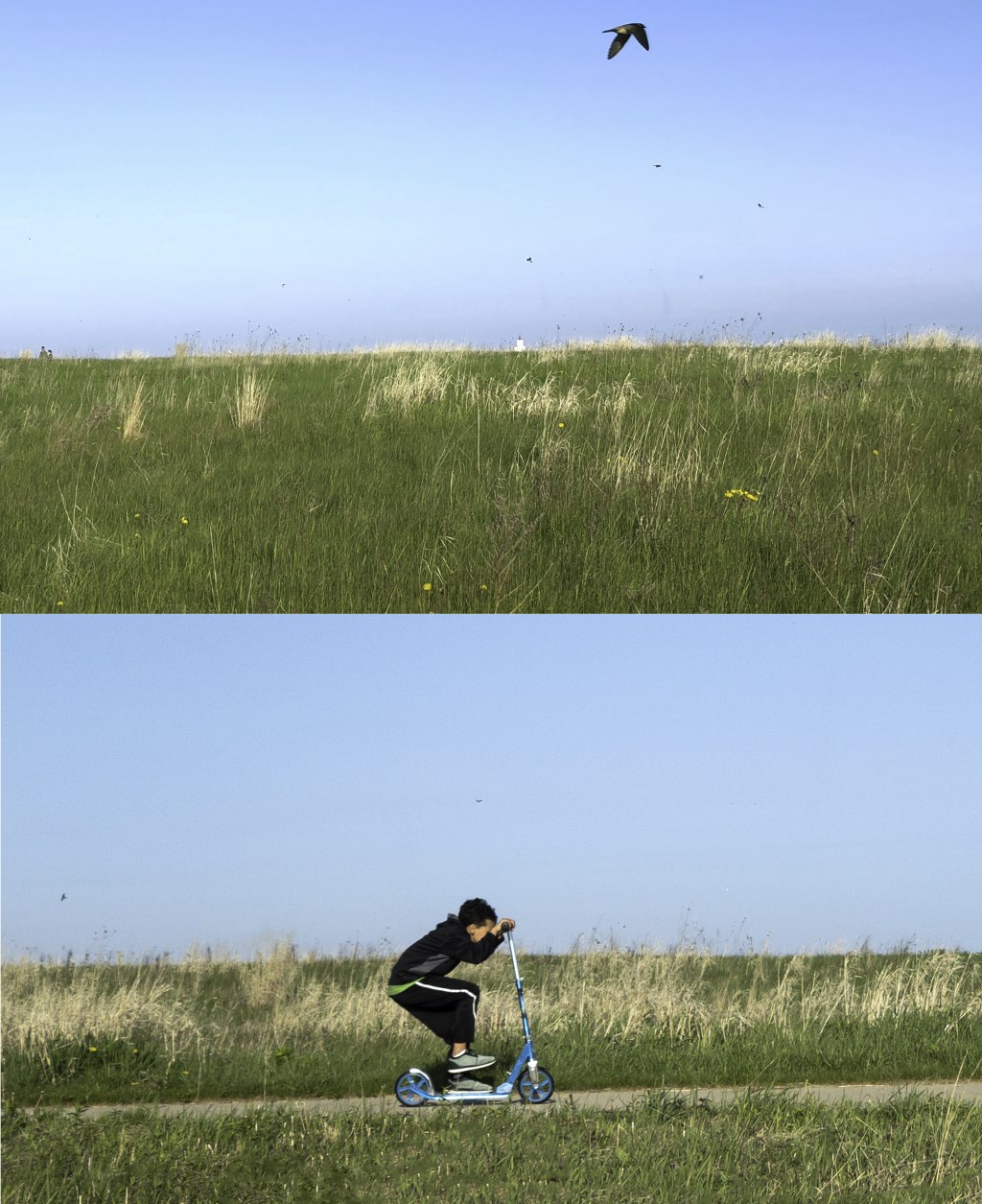 The park seems much larger than it is. Tiny figures dot the horizon. 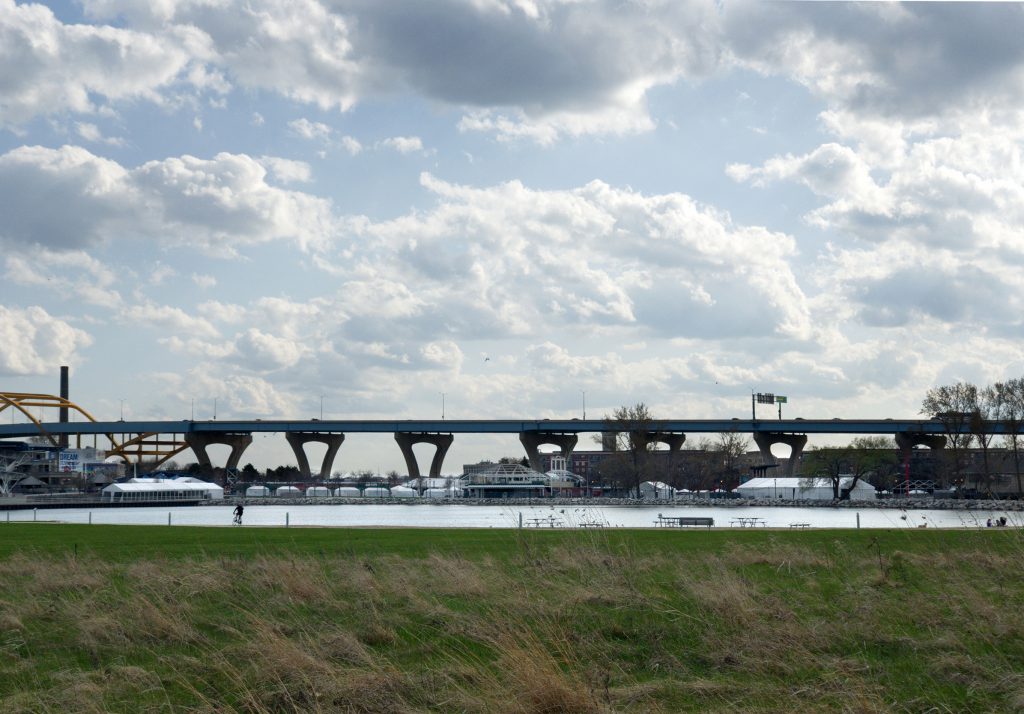 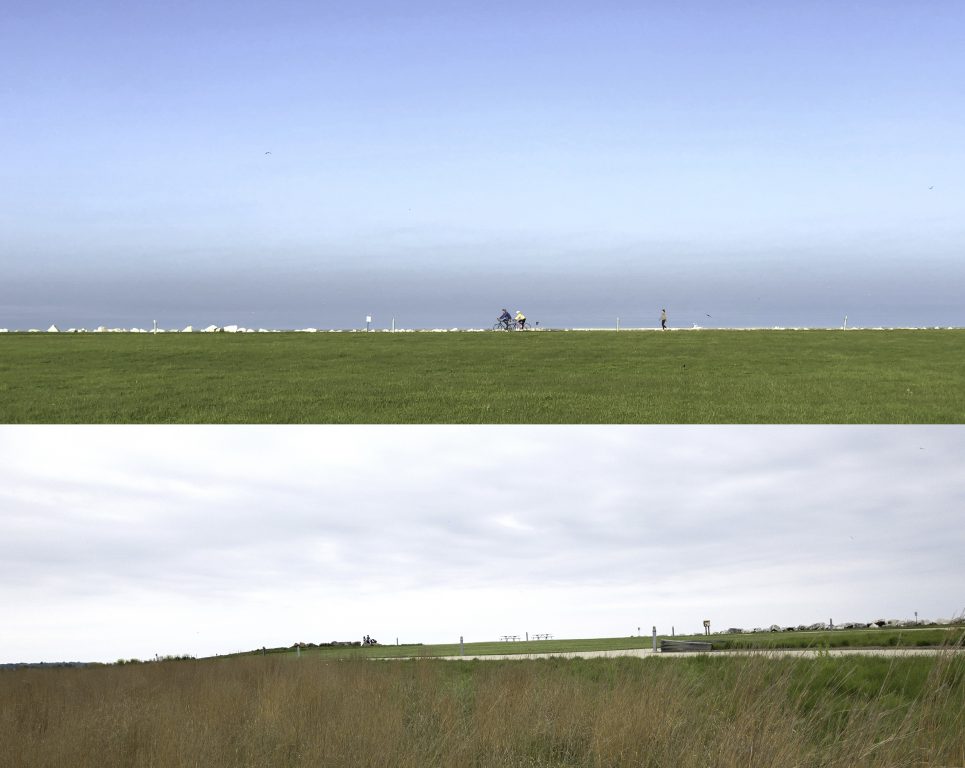 The high ground of the park naturally collects young lovers. Getting away from it all is romantic. And so are the views. 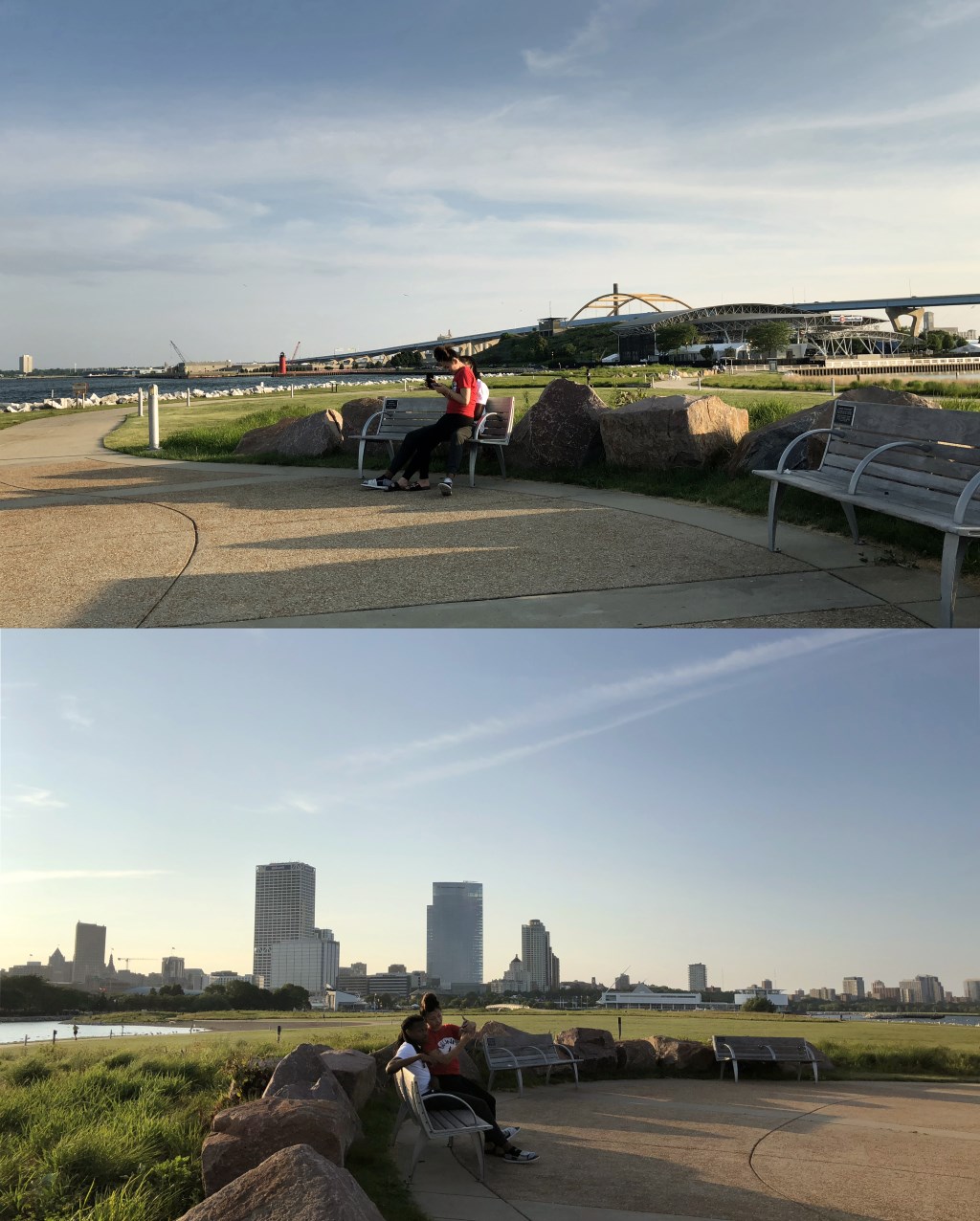 Space is a place. Lakeshore State Park puts everything at a distance. Except now we are filling it up with educational pamphleteering and possibly a multi-million dollar building.

Plunking these placards on the horizon is like putting a text panel in front of — rather than next to — a painting at an art museum. 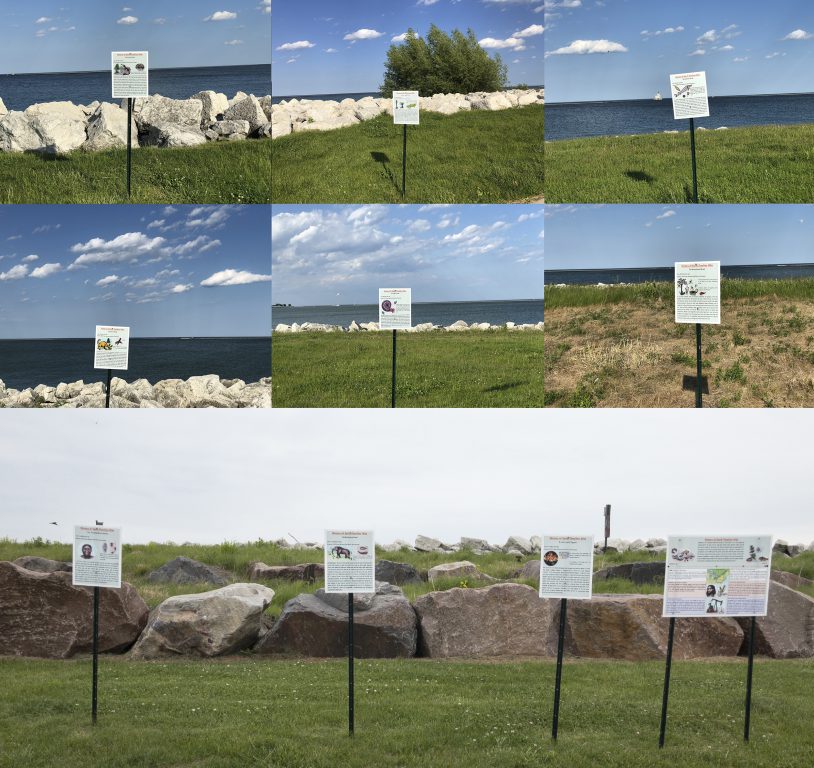 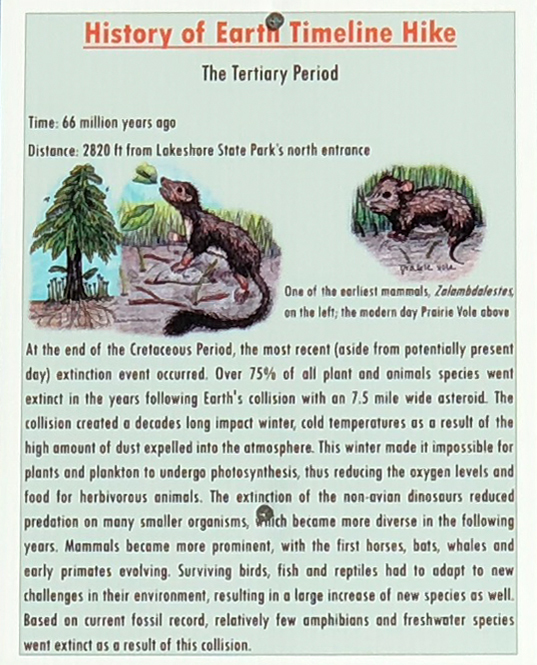 Why spoil the experience with a generic history lesson in Lakeshore State Park? This singsong story of the earth destroys the magic, distracts us from being present in the actual place. “Seeing,” as the artist Robert Irwin noted “is forgetting the name of the thing one sees”.

The wonder of it all. Right there, in the rocks and prairie and surrounding views. Unique places can create a state of consciousness that shapes our perception and quiets our minds.

Meanwhile, crank this gadget and listen to high school nature lessons that are easily accessible on a smart phone. 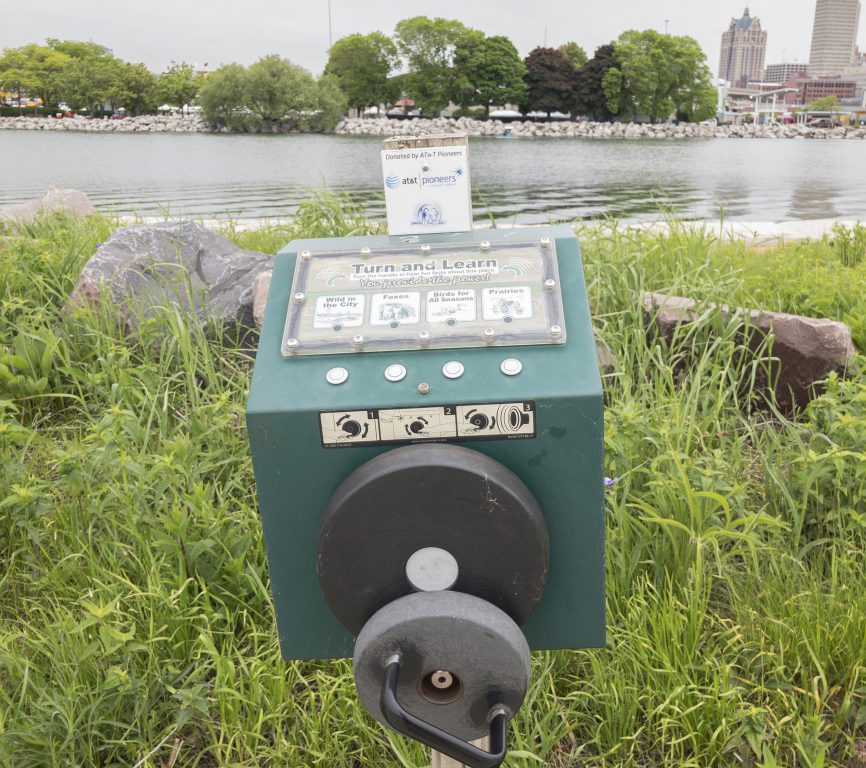 Now the Friends of Lakeshore State Park are raising $5 million for a Kubala Washatko-designed building on the site. It will have bathrooms and showers for boaters. There are seven boat slips on the site that provide the only income to the park. A classroom, offices and storage for DNR personnel. A base for programming at the park with an outdoor space for talks, music and the like.

The wildly ambitious design calls for a so-called “Living Building”, which is vastly ecologically superior to LEEDS certification. The project is perfect for the Kubala firm, which has a subspecialty in nature centers. As far as I can tell from the drawings the design is sensitive to its site. Like Discovery World and the Milwaukee Art Museum, the Lakeshore State Park Visitor and Education Center will be Modern instead of in the American Rustic style of Kubala’s Urban Ecology Center.

This will be a superior building, if you must put something else on this site. And the 2,500-square-feet footprint of the building is less than one percent of the 22 acre park. But it will take up a lot more of your mind.

There is going be a building right here, just over the bridge.

The allure of Lakeshore Park has everything to do what is not there. The planned visitor center extends the urban fabric of the Art Museum and Discovery World, thoroughly civilizing the place. It psychologically attaches the city to the park, dressing up and deflating the grand negative space that foregrounds the immensity of the city, lake, and sky.

Not to mention the price. Why not find a way to provide some of these amenities in a smaller building on the mainland just to the north of the bridge between Discovery World and Lakeshore State Park? 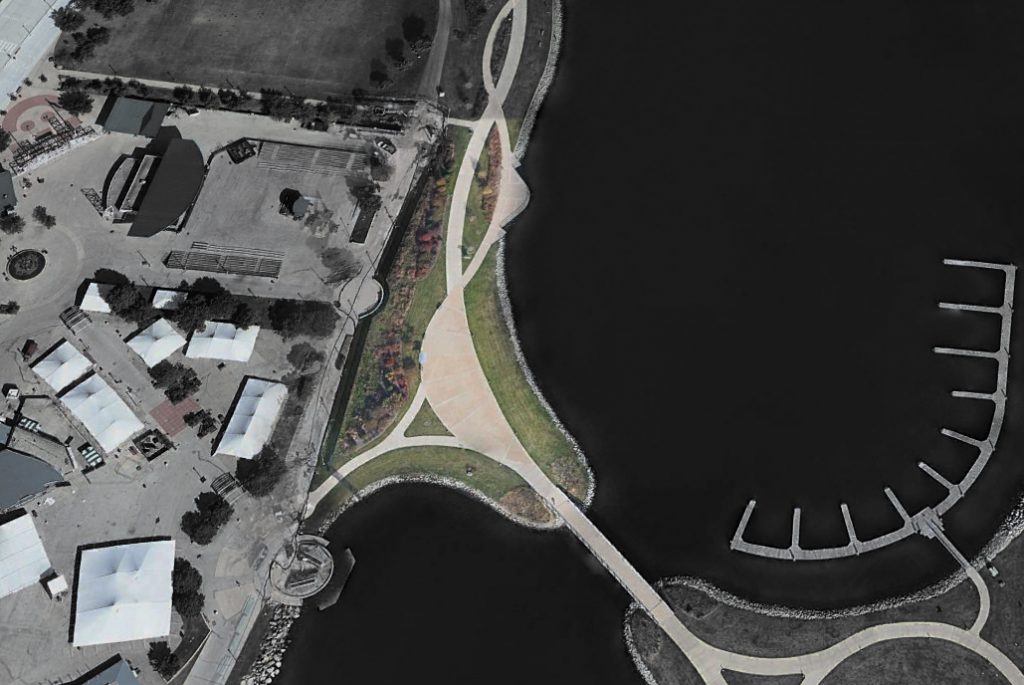 Surely a million dollars will do for a modest building for a few offices and bathrooms, to make a place that wouldn’t compete with the evocative emptiness of the park. And that would leave millions of dollars to spend on the soil and plants on the island.

Start with the basics. The park’s top soil that was brought in from the Marquette Interchange Project is thin (a matter of inches) and depleted, naturalists tell me. Adding a few feet rich top soil would retain more water, increase plant density and root depth. Then the prairie can renew itself and fight off invasive species, which dramatically decreases maintenance costs. 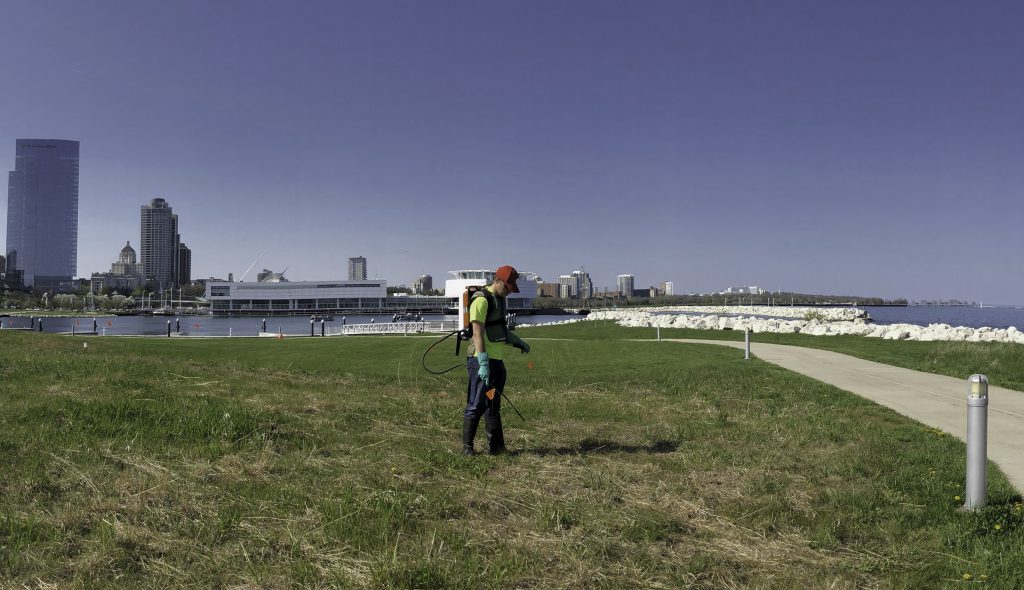 That money could also be spent on addressing the vestigial bluegrass that is at war with the prairie, and takes thousands of hours to contain each year. That would multiply the richness and diversity of plant and animal life — nature, the reason for the text panels and classroom planned for the park.

But independent of the price tag for this proposed building, and how that money might be better spent is its impact on the quiet, uniquely uncluttered experience created by this island refuge.

People come to it from all over. One week day afternoon I was surprised to interview people from as far away as Chicago. I’ve met people from Mequon, Muskego, and Racine. All loved the place.

Our parks used to place to get away from it all. Frederick Law Olmsted’s parks were a mental space as much as anything else. In the 19th Century they were a refuge from the soot and grime of the city, today from its messages and information that muddle the mind.

The mania about “activating” spaces with programs, texts, and art has to end somewhere.  Why not here? 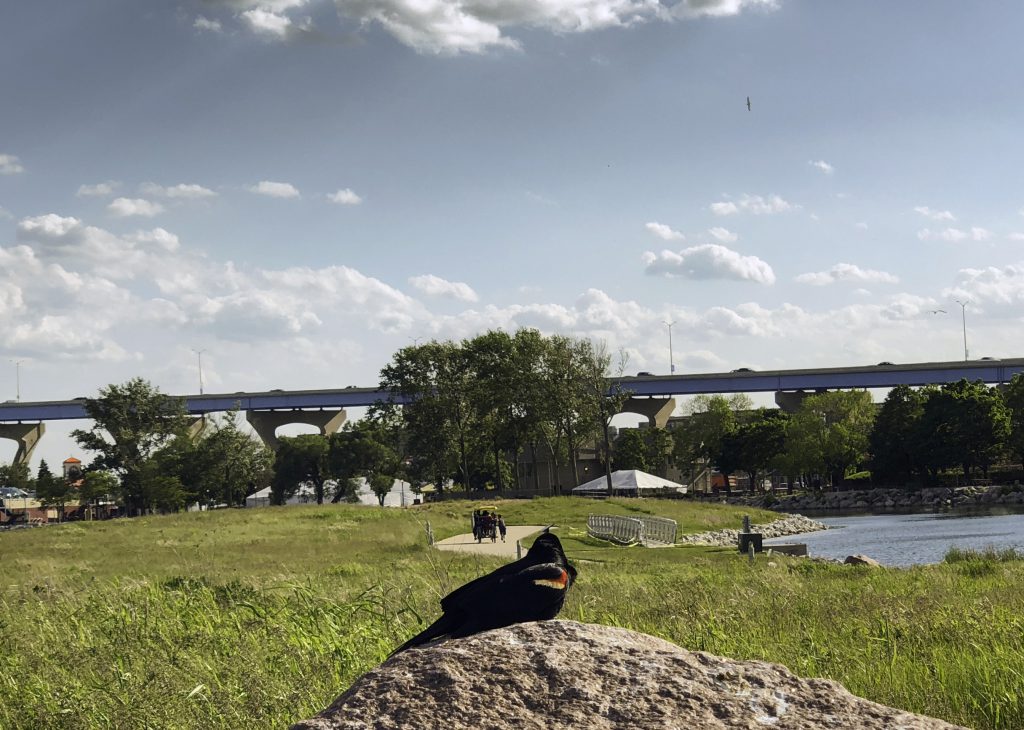 2 thoughts on “In Public: The Magic of Lakeshore State Park”