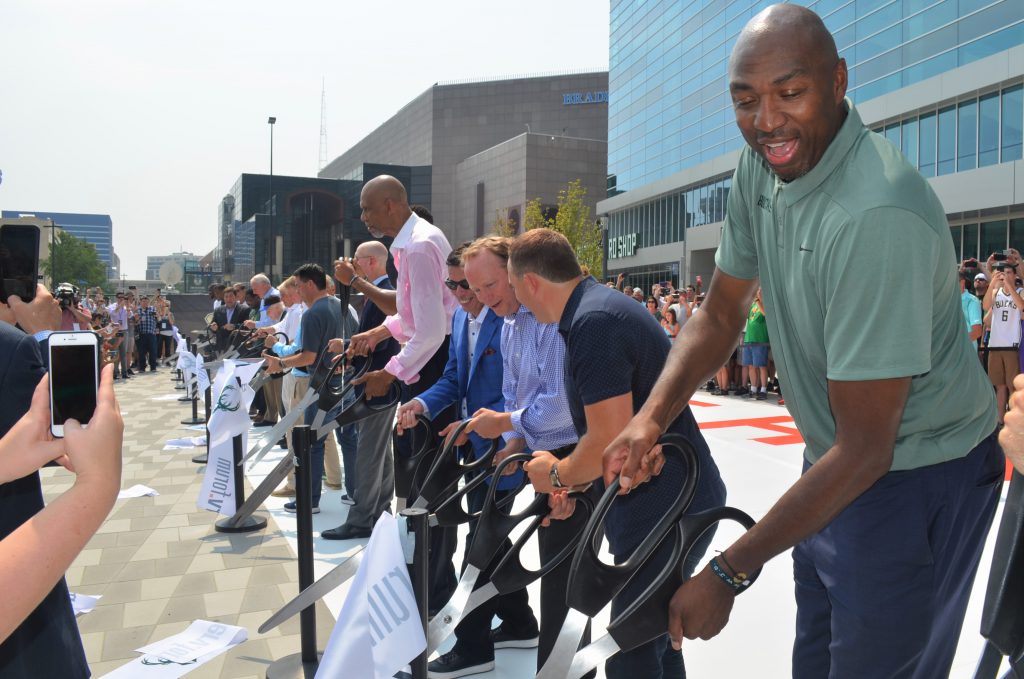 Ribbon cutting at the Fiserv Forum. Vin Baker in the foreground. Photo by Jack Fennimore.

A little over two years after construction began, the Fiserv Forum is now open.

The Milwaukee Bucks held a ceremonial ribbon cutting on the arena plaza, now known as Herb Kohl Way, just before throwing open the new arena doors to the public. Approximately 50,000 people were expected to tour the arena.

The 17,500-seat arena complex cost $524 million to construct, including a $250 million public contribution from the state, county and city. Former owner Herb Kohl contributed $100 million as part of his sale of the team, and the new owners were required to pay for rest, including any cost overruns.

Construction of the 730,000-square-foot building was led by Mortenson Construction. The building was designed by Populous, with support from Milwaukee-firm Eppstein Uhen Architects.

Over 3,800 craft workers spent two million hours constructing the 128-foot-tall building. Many of them were previously unemployed Milwaukee residents who were hired as part of the city-mandated Residents Preference Program. The program requires that 40 percent of all work hours on a project receiving over $1 million in city support be completed by previously unemployed or underemployed city residents. An additional requirement was in place for disadvantaged small businesses, and the Bucks announced that 76 percent of contracts on the project went to Wisconsin companies.

The first public, ticketed event planned for the arena is a concert by rock band The Killers with legendary Milwaukee-based band the Violent Femmes on September 4th. Giannis and the Bucks will play their first regular season game in the building on October 19th. Marquette University‘s men’s basketball team will play its first game in the new building on October 30th.

The entertainment center component of the arena is not yet complete. The privately-financed complex, which will be anchored by a second brewery for Good City Brewing and the first Wisconsin location for Punch Bowl Social, is scheduled to open in early 2019.

Jeff Yabuki, CEO of Brookfield-based financial services technology company Fiserv, also spoke briefly at the ceremony. Edens told Urban Milwaukee that the team continues to engage Fiserv, which is searching for a new location for its headquarters, and other firms on locating in the arena district. After repeatedly denying it, the company announced in late July that it had a 25-year partnership for the arena naming rights.

The arena is owned by the Wisconsin Center District, which also owns the convention center, Milwaukee Theatre and Panther Arena. The Bucks have a lease for the facility and are responsible for its upkeep.

Guests touring the arena were treated to an up-close view of virtually every corner of the new facility. The team opened up the arena bowl, which has twothirds of the seats in the lower level, allowing fans to test cheer the best seat in the house to the worst. The concession stands were also open for business, and featured a dizzying array of options ranging from Gold Rush Chicken and Sobelman’s to The Laughing Taco and Iron Grate BBQ.

The three private clubs throughout the building were also open. The layout of each is a dramatic departure from the BMO Harris Bradley Center, which was a much more utilitarian facility. A large, first-floor team store, also a departure from the prior arena, was open to the public for the first time.

Guests also got to see the “Milwaukee Bucks Art Collection,” which currently includes  79 original pieces and 43 photographs. Thirty-two artists have been involved to-date, 22 of whom have Wisconsin ties according to the team.

But before they could get to any of that, visitors had to traverse the massive atrium. The atrium, which connects guests to every level of the building, features floor-to-ceiling glass from the base of the building up to the highest level of the concourse. The team has visions of hosting everything from weddings to corporate events in it. “It’s going to be one of the greatest places to have an event in Milwaukee, bar none,” Feigin declared in a May tour of the space. 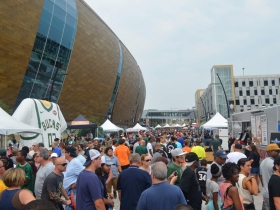 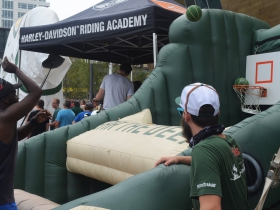 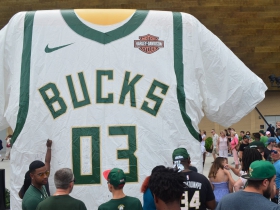 A protest, complete with a giant, inflatable rat, was held outside of the block party by Stagehands Local 18. The union is protesting what it believes are “substandard wages and benefits” for its members.

The Bucks have previously drawn praise for announcing that the minimum wage for arena workers will start at $12.50 an hour and rise to $15 an hour by 2023, as well as unveiling a targeted hiring for impoverished zip codes. The arena is expected to employ approximately 1,000 full- and part-time workers.

The new arena’s opening also marks the end of the road for the BMO Harris Bradley Center. Built in 1988, the $90 million arena was owned and operated by the state and built with minimal public support thanks to a gift by Jane Bradley Pettit.

As part of the complex arena district financing package between the Bucks, state, county and city, the team is required to take ownership of the former arena and demolish it. The Bucks have hired Veit to do that work, a substantial amount of which will be deconstruction instead of demolition to maximize salvageable material.

A memorabilia auction returned approximately $160,000 which will go towards closing the building.

The team, which will own the soon-to-be vacant lot, has not announced specific development plans for the site.

One thought on “Eyes on Milwaukee: Bucks Open Fiserv Forum”