Senator Kohl owned team from 1985-2014, made sure NBA franchise stayed in Milwaukee. 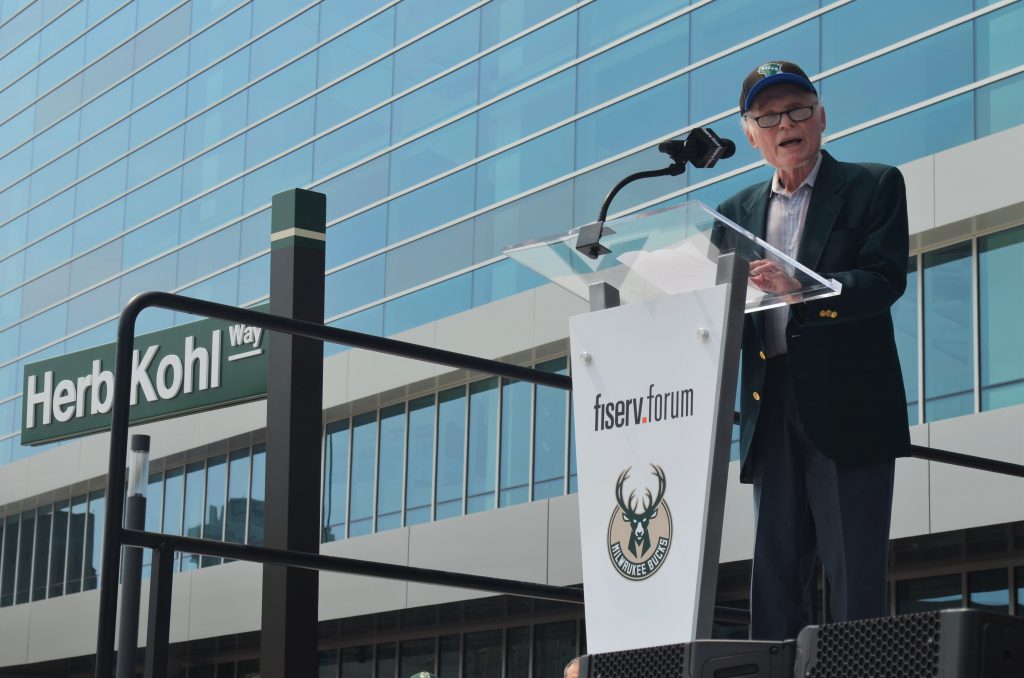 “Milwaukee, you now have an arena you can be proud of,” said Milwaukee Bucks co-owner at Marc Lasry to a crowd of thousands on hand for the opening of the Fiserv Forum.

The lengthy ribbon-cutting ceremony was held on the plaza in front of the arena. Emceed by longtime Bucks television announcer Jim Paschke, the ceremony was as much a celebration of the new arena as it was of former Bucks owner Herb Kohl.

Before the ribbon was cut, the plaza was rededicated as Herb Kohl Way. Kohl notably donated $100 million as part of his sale of the team to support the 730,000-square-foot arena’s construction, but he did far more than that according to many of the other speakers.

NBA Commissioner Adam Silver said the choice of naming it Herb Kohl Way, instead of street or avenue, wasn’t by chance. The commissioner, who joked that his tenure began with Kohl calling him to say he was going to sell the team, said that the Herb Kohl way is to work with “honor, respect and in a dignified manner.” Silver said that when Kohl called he made it clear the team would be staying in Milwaukee.

Mayor Tom Barrett praised Kohl, stating: “He constructed the original chess game that made this possible… We owe him a debt of appreciation we will never be able to repay.” Barrett was joined by Common Council President Ashanti Hamilton, who added: “It’s only Herb Kohl that can bring together the type of political will to make this happen.”

That chess game and political will included not just Democrats, but a number of Republicans.

Governor Scott Walker, who unveiled a “cheaper to keep them” campaign in his promotion of an arena financing deal in 2015, spoke at the ceremony, telling the audience that he believes the $250 million public-financing component will produce a 3-to-1 return. The governor, who is in a tough re-election race, took the stage to a mix of cheers and boos, and was quick to praise the bipartisan support the deal received in the legislature. Still Walker demurred to the man of the hour, “it was solely because of Herb Kohl that the Bucks stayed here in Wisconsin and this city.”

Kohl, who led the charge to keep the Bucks in Milwaukee when he bought the team in 1985, told the audience: “I have dedicated a big portion of my life to see this day arrive.” The former US Senator said the new arena is the next step to make sure the team “stays here, grows here and wins championships here.”

Kohl’s name will now be honorarily be attached to another Wisconsin political giant, Vel Phillips. N. 4th St., where the plaza stands, was recently renamed from downtown to its northern terminus in honor of the recently deceased political pioneer.