Governor bills taxpayers for 869 flights, many blatantly political, some as short as 24 miles.

By Louise Lyall and Savion Castro - Aug 23rd, 2018 03:34 pm
Get a daily rundown of the top stories on Urban Milwaukee 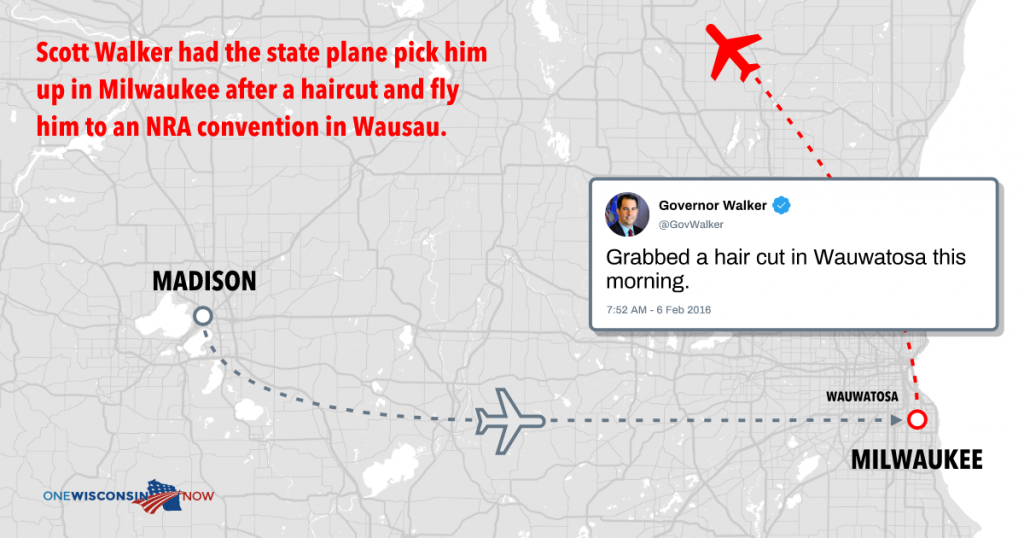 Scott Walker had the state plane pick him up in Milwaukee after a haircut and fly him to an NRA convention in Wausau.

After One Wisconsin Now’s extensive investigation of the use of state airplanes by Gov. Scott Walker, it seems his attitude toward Wisconsin taxpayers is, “I’ll fly, you buy.”

Since ending his run for president in September 2015, through April of 2018, Walker has taken a jaw dropping 869 flights on the state airplane, taking to the skies on average every three days. He’s logged over 114,000 miles in state owned and operated airplanes and stuck Wisconsin taxpayers with the tab, a net cost of over $818,000.

In an angry, personal response to these facts from the Gov. Walker on social media, he defended his serial misuse and abuse of state planes as necessary to hear from the people of the state.

However, in a recent radio interview, Walker more truthfully revealed what’s really driving his flying. Speaking of the dismal end of his run for president in 2015, the governor said, “Our approval ratings were really low back then … voters felt we should have stayed focused on Wisconsin.”

So the 50 year old career politician Walker, in office for nearly his entire adult life, did what career politicians do. He came up with a political solution to rehab his image and, as he said, for “… two and a half almost three years now, we traveled the state.”

We found, many of these travels were by air, including as Walker noted, were to what he described as listening sessions.

Former Walker cabinet secretary, Ed Wall, revealed in a recently released book about his time in the administration that the purpose of these events was far different, and far more political. He wrote, “The administration’s fear of a protestor spectacle at every stop would eventually turn the town hall meetings into little more than paid infomercial dog and pony shows for future campaign ads.” [“Unethical,” Page 163]

One Wisconsin Now’s analysis found that on at least 26 occasions Gov. Walker flew to attend one of these closed-door, invite-only town hall meetings in 2016. The general public and the news media were excluded. Only attendees invited by Walker’s office were allowed in, and these select few were oftentimes picked from lists provided by lobbyists, fellow Republican politicians and his state agencies with regulatory power over businesses.

The total cost billed to taxpayers by Gov. Walker for flying on those days including the non public, politically motivated events was $65,123.

Cross referencing flight information with schedules, social media posts and other resources revealed that Walker has also used the plane for questionable purposes beyond his politicking.

For example, flight records show in February 2016, Walker had a state plane sent from Madison to pick him up in Milwaukee after getting a haircut and attending a personal event to fly him to a National Rifle Association conference. The cost to taxpayers was $2,586.

Walker also used a state plane on a Saturday to fly to the funeral of Wisconsin Supreme Court Justice Patrick Crooks. Why would Walker spend $1,755 of taxpayer money on air travel when he could have driven? According to his social media posts he had tickets to a Badger football game that evening in Madison.

He’s even flown ridiculously short distances, like the 24 miles from Appleton to Green Bay, 39 miles from Janesville to Madison or 24 miles from Kenosha to Milwaukee.

Eight years ago, Scott Walker campaigned for governor by bragging about how he drove an old Saturn wagon and packed his own ham sandwiches for lunch. Now he’s using a state plane, paid for with our tax dollars, for things like going for a walk or making sure he’s back in Madison in time to catch a football game.

He is not that guy anymore. He has grossly misused and abused our tax dollars. We are owed an apology, and reimbursement.

Louise Lyall is a research associate at One Wisconsin Now. She graduated in May from the University of Wisconsin-Madison with a B.A. in English and political science.

Savion Castro is a research associate at One Wisconsin Now and a University of Wisconsin-Madison student.