The late Milwaukee artist was displayed internationally. His work is now at Grove Gallery. 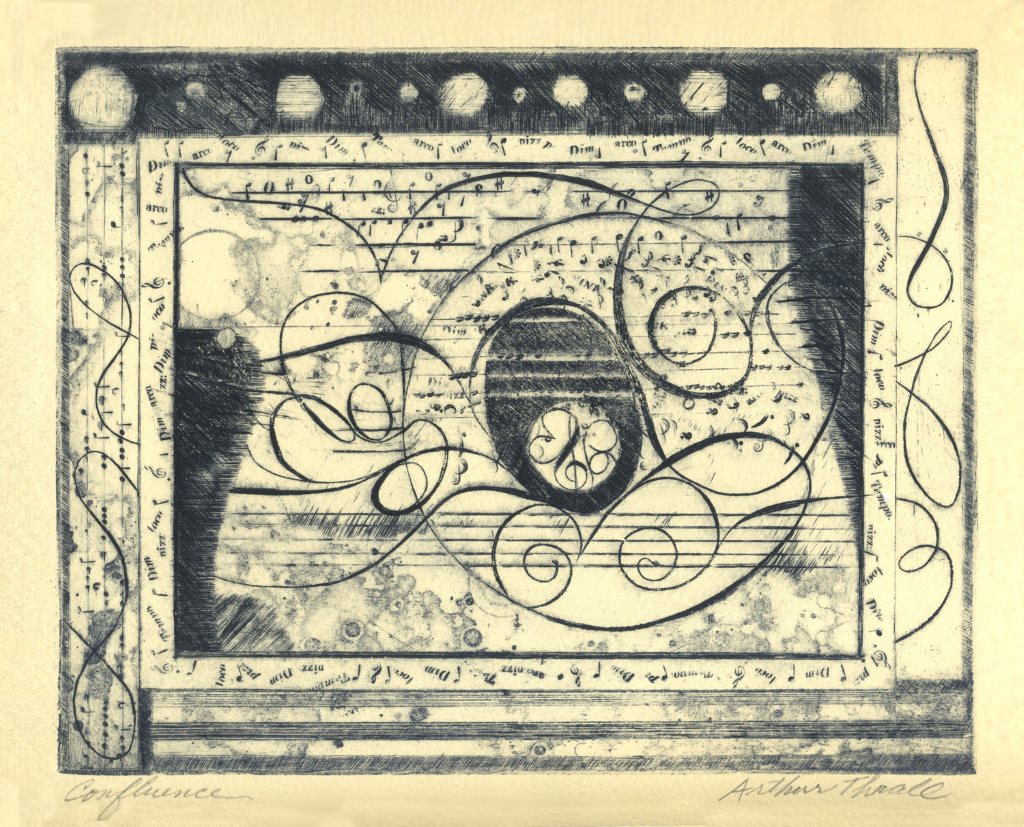 Dressed in stone-washed denim from head to toe, 88-year-old artist Arthur Thrall carefully walked down the Nut Factory studio hallway. His long white hair was combed back and flowed in smooth waves like the curved lines in so many of his engravings. When I saw him that day, he was fully concentrating on his next step and I didn’t want to say word to disrupt him. Unnoticed and in silence, I watched him walk in that distinctive way. That was the last time I saw Arthur, who passed away in 2015.

I miss him. My studio was down the hall and I had befriended him over the years. His studio reminded me of Yoda’s final cave dwelling, small and magical, a downsizing and simplification for a master in transition. The 150-square-foot room had a large window facing the hallway that was covered by a yellow curtain. When Arthur was there, which was nearly every day, it was evident because the studio glowed like a lantern. Elevated tables for comfortable working created pathways for ease in mobility. Arthur once told me that he danced all day long, not a literal dance, but the continuous movement that occurs with the process of art making.

“Musical Prints and Choreographed Lines: Works by Arthur Thrall”, the show currently on view at Grove Gallery, 832 S. 5th St, offers us a master class in printmaking and calligraphy. In his long productive life, Thrall (1926 – 2015) was a printmaker, painter, and art professor at Lawrence University. Few artists have work in The Tate, The Victoria and Albert Museum, The British Museum, Smithsonian Institution and the Philadelphia Museum of Art collections, to name a few on Thrall’s remarkable resume. The Grove exhibition is a rare chance to see a wide variety of this master’s late work with examples of etchings, collagraphs, aquatints, engravings and embossments as well as calligraphic acrylic paintings on handmade paper. The gallery also has on loan a couple of his original plates and tools which allow us an insightful look into the method behind these pieces. Arthur taught at Lawrence University for 26 years and continues to teach through this show.

His interest in visual music began in the late 1960’s when he was commissioned to make a print “Homage to Bach” by the Lawrence faculty organist to honor one of her students. Arthur’s interest in using musical themes continued for the rest of his life. In the 1970’s, he spent two years teaching at Lawrence’s London campus where he befriended a music engraver who traded metal music punches for a print, allowing Arthur to further expand his visual repertoire.

Arthur’s work takes the symbols of music and infuses them with the life of music, animating the notes and scales into flowing designs which leap from the confines of traditional sheet music and are transformed into visual melody. Engraving is the art of carving lines into a metal plate, inking the plate and producing 2D prints from that process. Many of his plates are cut into shapes, turning what would normally be a 2D rectangular “window” into a 3D object and when printed under the weight of a press, gives the prints a bas relief quality. In a piece like “Festive Tune-up II,” the shape of the plate itself dances with undulating edges cut and beveled with care. The notes in the piece look like ancient Arabic calligraphy, which also interested him. “Baroque I” is a hand colored intaglio that has the shape and elegance of an ancient vessel with a cross-section view of the swirling, abstract musical references within. The space is shallow, and in one section a scrim of semi-transparent paint covers a circle, slightly pushing it back in space, while another area seems to glow from behind like a stained-glass window.

There are two small prints that are pure white embossments. In “Flowing”, the weight of the press and thickness of the paper create areas of energy-filled notations that congregate like pebbles in a clear and flowing pond. In “Water Music,” the embossed shapes of the print seem to be slightly submerged, allowing the highest points in the circular shaped print to break the paper’s pond-like surface. A small print, “Continuum” has a written quote by Albert Einstein around an inner rectangular frame, “I never think of the future. It comes too soon”, which seems to embody the spirit of this show and the work. This is art that is timeless yet was made while fully absorbed in the present moment, by a master who danced his way into eternity.

One thought on “Visual Art: Enthralled by Arthur Thrall”