By Laurel White, Wisconsin Public Radio - Aug 1st, 2018 02:02 pm
Get a daily rundown of the top stories on Urban Milwaukee 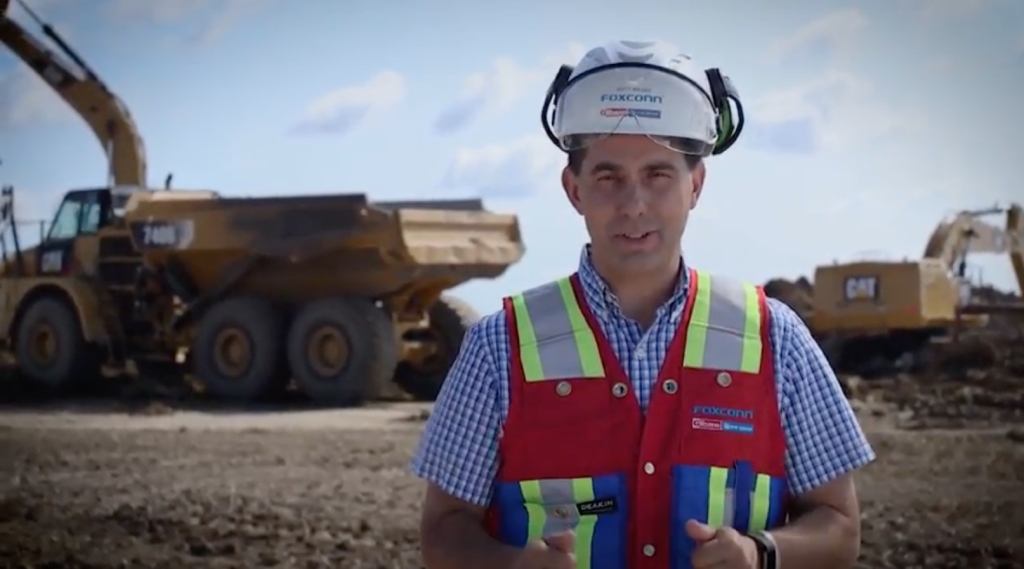 Gov. Scott Walker’s re-election campaign responded Tuesday to mixed public opinion of the Foxconn deal with a series of TV ads touting the company’s contracts with businesses across the state.

The four advertisements are targeted to different regions of the state and feature local business owners who say they’ve gotten a boost from Foxconn.

According to the latest Marquette University Law School survey, 46 percent of Wisconsin residents don’t think Foxconn will be worth state payments of up to $4.5 billion over 15 years. Fifty-eight percent of survey respondents said Foxconn won’t benefit businesses near them.

“Foxconn will help businesses all over the region,” Walker says in the ad airing in Green Bay and the Fox Valley.

In the ad, Walker touts the Foxconn innovation center in Green Bay, which was announced last month. That facility, along with another similar hub in Eau Claire, are slated to employ hundreds, according to the governor.

Each ad mentions that Foxconn needs to create jobs and invest in construction projects in order to earn tax credits.

“No jobs and investment, no credits,” Walker says.

Democrats were quick to push back on the governor’s advertisements.

“Scott Walker knows he’s in trouble on Foxconn and he’s scrambling to play defense,” said TJ Helmstetter, Democratic Party of Wisconsin spokesman for the 2018 gubernatorial election. “Walker is trying to buy his way out of a bad deal with slick TV ads.”

The eight Democrats running for governor all oppose the Foxconn deal. Some argue it can be abandoned, while others say the best path forward would be renegotiating the state’s contract with the company.

Walker’s ads on Foxconn are the 10th, 11th, 12th, and 13th of his 2018 campaign. Others have focused on workforce development, the opioid epidemic, and education.

Only three Democratic gubernatorial candidates — Tony Evers, Matt Flynn, and Kelda Roys — have purchased TV airtime so far. Each of their campaigns have released one ad.