The House of Spider George

He's the entertainment director of Festa Italiana, and married to a Mafia don's daughter. 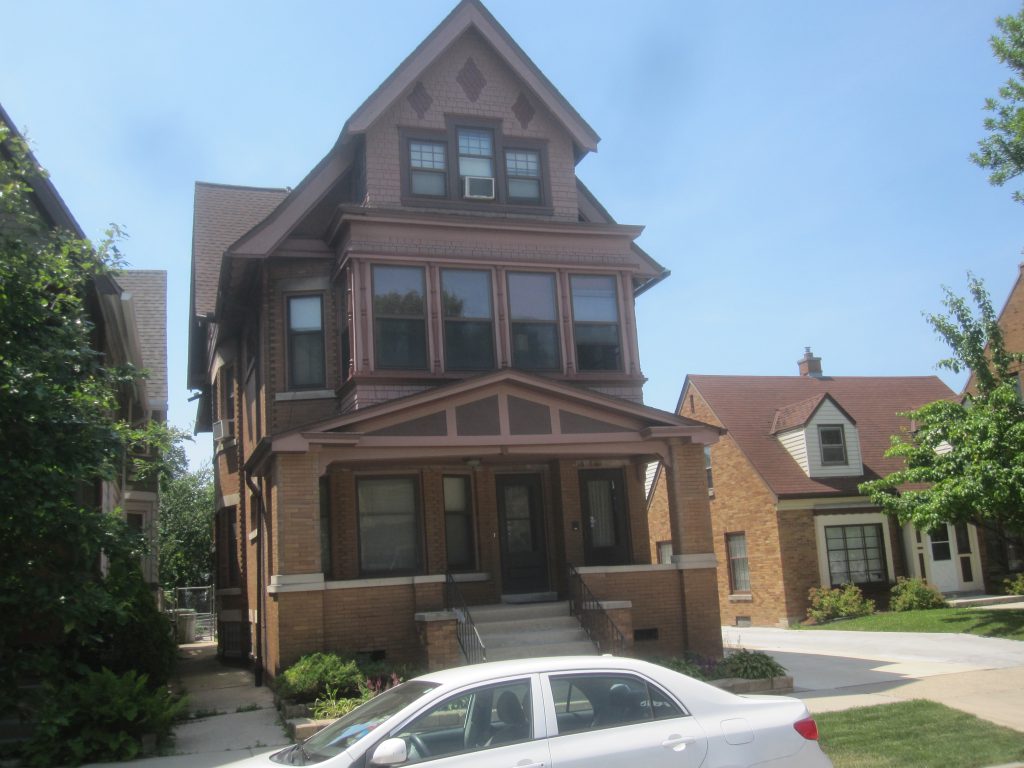 The House of Spider George. Photo by Michael Horne.

This is a lovely home by itself and notable for its occupants: Generations of one family lived here for nearly 70 years while running one of the city’s successful chain bakeries and the current occupant, a musician and orchestra director and his colorful wife, have been in residence for over three decades.

It is a shame the original building permit for this home has disappeared. The handsome brick duplex on N. Astor St. is among the most attractive and significant of such structures in the city. The house is a century old. And the rare stability of its occupants is an accomplishment in any neighborhood, especially the dynamic Lower East Side, where this building stands among a group of mostly frame homes with wildly diverse architecture.

Confusion about the home’s history dates back decades. This is in part to a misfiling in the city permit records which suggest alterations to the building as far back as 1898. Red herring! The structure altered was actually the one to the south. The error was compounded in other sources, fixing the home’s construction date as 1898 in many sources. But maps of the city show no home on this site as late as 1910.

Even the files of the city assessor were in error, back in the pen-and-inkwell era, where the file shows that this home was built in 1898, with an addition in 1913. Both were later crossed out, (in pencil) when an unknown assessor decades ago established the building’s date of construction to be 1918, and we will go with that.

But it would be nice to know some other details, like the name of the architect, for this building certainly shows the presence of a trained design professional. It is a lucky survivor.

Was Built for Baker

If this home had been built a block to the south, it would have been in the doomed Park East Freeway corridor, virtually the entirety of which was razed in the 1970s for the construction of a freeway never built. Among the properties lost was the bakery of Joseph Poehlmann, located around the corner from here at what was then 166 Ogden Ave. It was Poehlmann’s family that would occupy (for more than 60 years) the house we are discussing: he lived here in the upstairs unit, while the lower floor was rented to Dr. Clarence F. Hardy as his residence. The doctor’s  office, at what was then 848 Marshall St. remains. It is the fancy brick building with a turret at the southeast corner of E. Brady and N. Marshall streets. We can imagine the doctor walking a couple of blocks home to enjoy lunch with his wife Mary before returning to the office for the afternoon patients. We can likewise imagine Joseph Poehlmann walking to the bakery to prepare the bread that Mary bought for her husband’s luncheon sandwich.

In 1982 the assessor took a look around and described this as a “Quality brick duplex. Cut stone trim. ”

In 1984, when the home was sold to its current owners, George T. Busateri and his wife Catherine Balistrieri Busateri, for $60,000, the assessor did a post-sale inspection.  He noted “problems with sagging windows and attic sun porches front (added some time after house was built.) … Interior very original and much natural wood, buffets & stained glass. Quality in need of plaster crack repair & paint / paper. Only 1 attic bedroom, other rooms storage. All in all, condition Av. for age. … NO GARAGE.”

No garage! Apparently the 1928 garage was lost somewhere along the way.  The current owner built a detached replacement garage for $5,000 in 1996. It remains, only 16 inches from the neighboring property’s boundary. The city required 18 inches clearance, but the neighbor, Pam Flasch, had no objection to the proximity of the proposed structure. Previously Busateri had updated the home’s electrical system, and abandoned an outdoor 1,000-gallon fuel oil tank by having it be opened, inspected and then filled with sand. (There were or are two ash pits in the basement, dating to the coal furnace days.) He also spent $3,000 in 1989 to excavate down to the footings of the north and west walls, to repair the foundation and to waterproof it. These are all sensible, expensive measures that have helped this home maintain its integrity, value and low water table in the basement. The home has oak floors and varnished oak trim, loads of closets and other built-in features of the time, still quite handy and useful today.

A Home and Studio for a Musicial Enterprise

Since 1984 this has been the home of George and Catherine Busateri, the latter serving as George’s wife and business partner for 35 years.

Busateri is a consummate musician, arranger and promoter, operating as George Busateri Productions, LLC. For decades he has served as the entertainment director of Festa Italiana, which runs this year from Friday, July 20th to Sunday, July 21st. He is also the orchestra contractor at Potawatomi Casino. According to his website, his band (indeed an “orchestra,” the classically trained musician says) has backed up such acts as Aretha Franklin, Frank Sinatra, Jr., Manhattan Transfer, John Tesh, Joan Rivers, Smokey Robinson, Don Rickles, The Funk Brothers and many others.

After an absence of 12 years from the Festa lineup, Busateri’s own band, Spider George and the Web, is scheduled to perform nightly at 9 p.m. on the Harley-Davidson Roadhouse stage.

His Wife a Partner in Family Business

According to a story in The Italian Times, Busateri and his wife Catherine, known as “cootie,” “possess the expertise necessary to accommodate the many facets of music and stage production.”

The story by Pam Pietravalle quotes Busateri as saying, “Most folks think of the entertainment industry as all fun and games, when it actually involves a myriad of duties and like all businesses it’s a lot of hard work.”

The story goes on with a marvel of understatement:

Cootie attributes her knowledge of the live entertainment industry from being exposed to and later working for her dad from age 14. Her dad, the late Frank P. Balistrieri was an entertainment promoter (including boxing), owning and operating numerous nightclubs, a dinner theatre and larger venues when needed.

In fact, Frank P. Balistrieri referred to himself as “the most powerful man in Milwaukee.” The FBI called him the head of the Milwaukee Mafia. Balistrieri and his sons John and Joseph were sentenced to Federal prison on conspiracy and racketeering charges. The senior Balistrieri was released in 1991 due to ill health and died in Milwaukee in 1993.

Lately, cootie has taken to Facebook to “rat out” her husband, whom she says needs to rest and get ready for Festa. She addresses her concerns in a series she calls “Ratting Out My Husband.”

“This is going to really piss him off,” she adds.

Hello everybody! This is cootie using George’s cell. This is an important post for ALL Festa peeps. Starting right now anything regarding Festa will be handled by ME! In short “ I am the captain now.” Anything regarding Festa that has not been addressed in the last 24 hours please resend your request to George’s cell & I will take care of everything. George has been ignoring my bitchin’ & preaching to stop overdoing it and pay closer attention to his health issues.

To which her husband responded:

It’s hard to believe my wife is a Balistrieri! Didn’t she learn anything in that family? You don’t talk about certain things. Now she’s doing a play-by-play of our lives. Ah, but I love my cootie-bug!! She’s very concerned about me; but I’ll be fine. See you at the game!! [The reference was to Sunday’s Old Timer’s Baseball Game at the Cass Street Playground.–Ed.]

I love my wife, dearly! However, I’m doing fine. I will be at Festa – no problem. Thanks for all the kind words, everybody. My wife is truly a one-of-a-kind. They just don’t make them like that anymore.

I can do whatever I want b/c everybody is dead! Family members, Festa folks. I always speak my mind. These peeps on here are Family/Festa/FB friends. And, I’m having fun! It’s like my own reality show.

See you for the show at Festa! 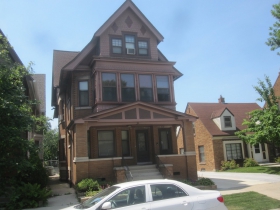 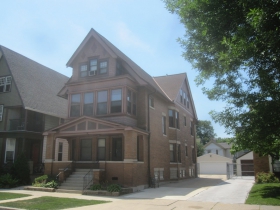 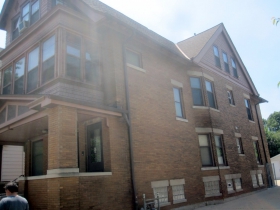 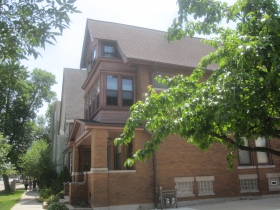 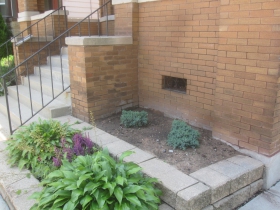 One thought on “House Confidential: The House of Spider George”