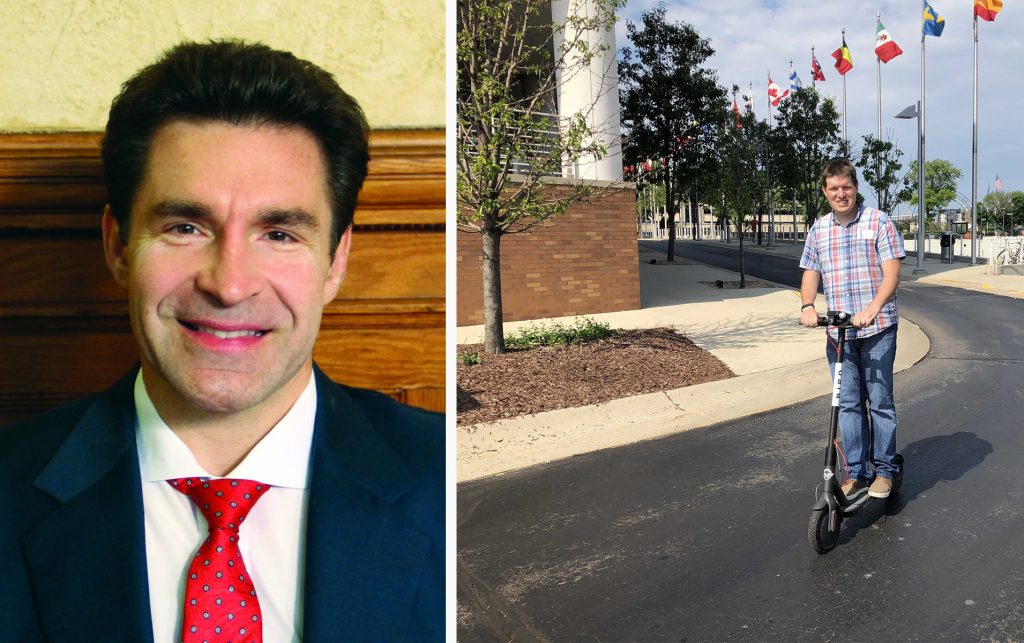 Tony Zielinski and a Bird scooter.

Alderman and mayoral candidate Tony Zielinski is moving to put the city on record supporting the legalization of dockless motorized scooters.

Zielinski, who represents Bay View and other south side neighborhoods, plans to introduce a resolution that would order the city’s Intergovernmental Relations Division to lobby the State Legislature to grant an exception that would legalize the electric-powered scooters.

The move would be a boost to California-based Bird, which dropped off 100 scooters on city streets on the first day of Summerfest and recently deployed even more scooters. The electric-powered scooters, which go up to 15 miles per hour, can be rented via a smartphone application for $1 per ride plus 15 cents per minute.

Shortly after they were deployed on city streets, the independent City Attorney’s office determined Bird is operating in violation of state law and initiated a lawsuit against the scooter company.

Because motor vehicles in Wisconsin are governed by state law, the city lacks the legal authority to legalize the scooters.

The Common Council’s Public Works Committee unanimously endorsed a plan Tuesday that would legalize the scooters, but only after the scooters are first granted an exception by the state from statutes governing motor vehicles. Until that happens, the committee gave the go-ahead for the Milwaukee Police Department to impound dockless scooters found parked on city streets or sidewalks. Both committee actions will be taken up by the full Common Council on July 31st.

Ald. Robert Bauman, who chairs the Common Council’s Public Works Committee, characterized Bird as “literally giving the citizens of Milwaukee the middle finger,” in response to the company ignoring the city’s request to cease-and-desist until the scooters are deemed street legal.

Zielinski tells Urban Milwaukee: “The Millennials have embraced the Bird scooters. And we should help make Milwaukee more attractive for Millennials.”

A fervent opponent of the streetcar, the Bay View alderman is a fan of the scooters: “I support as many non-vehicle transportation options as possible.”

His directive for the city’s lobbyists is intended to signal the city’s openness to new technology and accelerate the legalization of the scooters.

Assuming Zielinski’s resolution goes through, it may not impact the timeline for legalizing electric scooters. The Legislature is out of session until January 2019, and is unlikely to schedule a special session solely to grant an exception for motorized scooters in a heavily Democratic city before a contentious November election.

During Tuesday’s Public Works Committee meeting, Assistant City Attorney Adam Stephens laid out the core issues of the city’s pending lawsuit against Bird, which has since been moved up to federal court at Bird’s request. According to the City Attorney’s office, the scooters cannot be legally operated on city streets because of state statutes that govern vehicles operated on the public right-of-way. The state law, which municipalities are required to adopt uniformly, requires vehicles to have a certificate of title, be registered with the state, and meet certain safety standards.

Certain vehicles, like bicycles, Segways and various agricultural vehicles, are exempt from such regulation. There are many exceptions,  but “Bird’s motorized scooters are not one of them,” Stephens noted.

The city has asked Bird to cease and desist, but the company, which Stephens says hasn’t registered to do business in Wisconsin, has declined to act.

Looking at other cities where Bird operates doesn’t offer much guidance for Milwaukee officials on how to govern the scooters, because many “have their own traffic jurisdiction that the City of Milwaukee does not have,” Stephens noted. His office has done an extensive search of reports from other markets.

Bauman put the situation plainly, offering this announcement to “all the media out there; the city has no power to legalize this Bird scooter operation on the city streets.”