Since March the stretch from 16th to 35th under construction, slashing business sales.

By Abby Ng, Milwaukee Neighborhood News Service - Jun 22nd, 2018 10:25 am
Get a daily rundown of the top stories on Urban Milwaukee 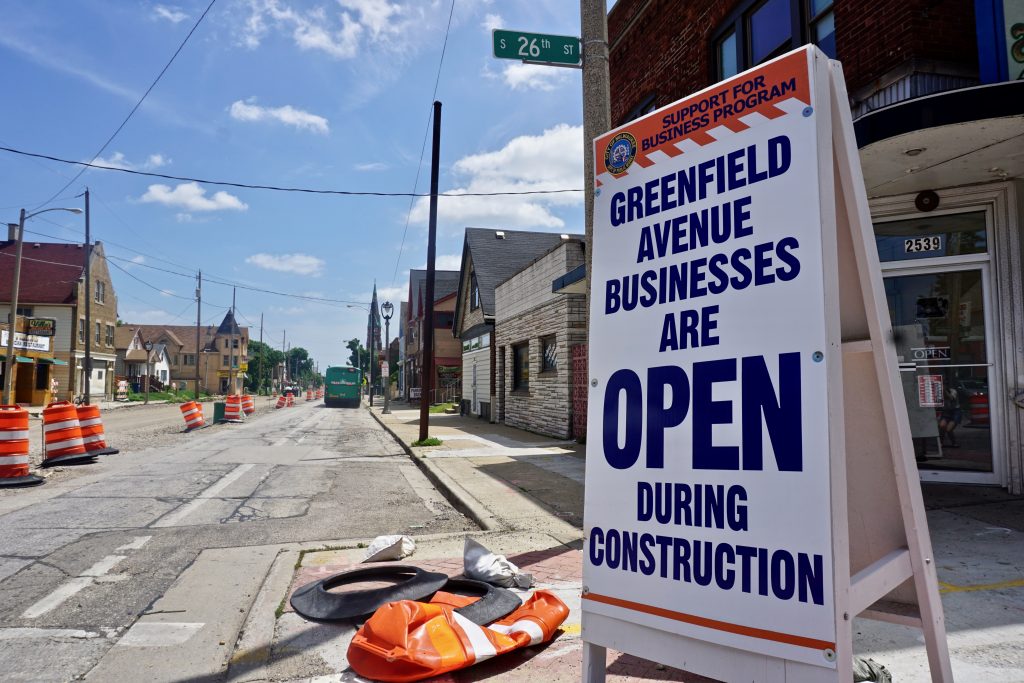 The Department of Public Works has placed signs in the construction zone offering detours to businesses because the entire westbound side of the road is closed. The eastbound lanes will be closed later this year. Photo by Abby Ng.

Cars crawl in single file, gravel crunching beneath their tires. Determined shoppers circle side streets searching for parking as store owners wait patiently for their arrival. Large, bold signs tell passers-by that businesses are open, but less determined shoppers drive away when the light turns green.

Construction on Greenfield Avenue between 35th Street and Cesar Chavez Drive began in March. Now, for nearly 20 blocks, traffic is limited to one-way going eastbound. In the next phase, construction will switch to the other side of the street, with completion expected in November. But in the meantime, some small, family-owned businesses are losing money.

Rob Heotis, director of operations for Pete’s Fruit Market, said weekday business at its location on the corner of Greenfield Avenue and Cesar Chavez Drive is down 15 percent. He said he suspects customers go somewhere that is more convenient when they need to grab something quickly. He worries about how this decline will affect the business as construction continues.

“A month, two months is okay. We can deal with it, but going on to four or five months is really hard,” Heotis said. “It’s definitely going to be a struggle.”

One of the market’s regular customers, Olga Vara, said she used to go to Pete’s once a week, but has been going only occasionally since construction started. 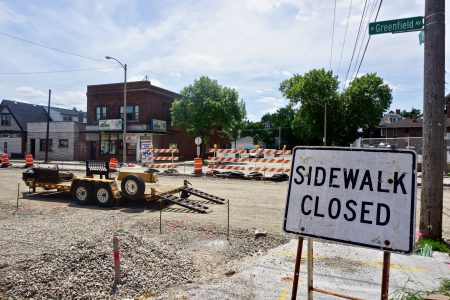 When the project is completed in November, Greenfield Avenue will have an 11-foot wide driving lane, an 8-foot wide parking lane and a 5-foot wide bicycle lane in each direction. Photo by Abby Ng.

“You don’t want to come,” she said. “It’s just crowded. It’s just construction. Everything is going too slow.”

Vara said she goes to Pick ‘n Save and Aldi instead of going to Pete’s Fruit Market as often.

The Milwaukee Department of Public Works (DPW) predicts that the entire project will take eight months, and that is the typical length of time for a project of this size, according to Sandy Rusch Walton, DPW communications manager. A new storm sewer pipe, natural gas line, electrical duct package and communications duct package will be installed, as well as new curb bump outs, trees, water main and hydrant alterations and paving. New traffic signals will be placed at South 21st and 31st streets. The construction will cost more than $5 million, Rusch Walton said.

The DPW website lists “enhanced safety for pedestrians, bicyclists and motorists, and improved overall operation of the roadway” as goals of the project.

Heotis said these improvements are not worth the negative impact on Pete’s. He said it takes more than construction to create change in the neighborhood.

“With fixing the street, you’re fixing the cosmetics and you have to follow up with police and cleaning the neighborhood up … You have to put a big effort into keeping these streets safe and clean,” Heotis said.

He is also concerned that profits at Pete’s Fruit Market will not pick up again after the construction is finished. Customers may slowly forget about Pete’s, forming new habits and finding new places to shop, Heotis said.

Paying for more advertising is not an option for Pete’s Fruit Market, especially because business is already down, Heotis said. All the grocery store can do is continue to provide good produce and service.

“We’re doing our best, but construction hurts all businesses,” Heotis said. “I feel bad for the businesses who are even smaller than Pete’s. They’re going to be really hurting.”

According to DPW, it provided businesses on Greenfield Avenue with “a variety of resources that can help (them) with plan development, consulting, financial and technical assistance, and expanding professional networks,” including information for city facade and signage grants.

Rusch Walton said a business liaison and city inspectors routinely keep in contact with businesses in the construction zone, offering help with problems such as parking. Businesses on Greenfield Avenue  were notified of the project two years in advance to allow them to prepare. A community meeting was held in April, and signs redirecting traffic to stores and restaurants have been put in place.

Heotis said he has not received much help from the city.

Even with the city’s assistance, profits are also down for some ventures smaller than Pete’s Fruit Market, just as Heotis thought. Business is down 50 percent at Villa’s, 2522 W. Greenfield Ave., according to the restaurant’s owner, Alfredo Villa. Villa’s sits on the closed westbound side of the road and with construction, Villa said, customers have difficulty finding parking. Despite these challenges, Villa said he is grateful for the construction.

“I understand that the city has to fix the street. There were too many (pot)holes in front of the restaurant,” Villa said.

José Sanchez, owner of Alamo Embroidery, 2539 W. Greenfield Ave., also said he is happy about the construction. So far, his business has been steady but he does not know how that may change once the road is closed on his shop’s side.

Regardless, Sanchez said it will be worth it in the long run, and “there’s nothing you can do but keep going.”