Career in asset-based lending led him to where he is today, a Democratic candidate for governor.

By Shawn Johnson, Wisconsin Public Radio - Jun 8th, 2018 11:54 am
Get a daily rundown of the top stories on Urban Milwaukee 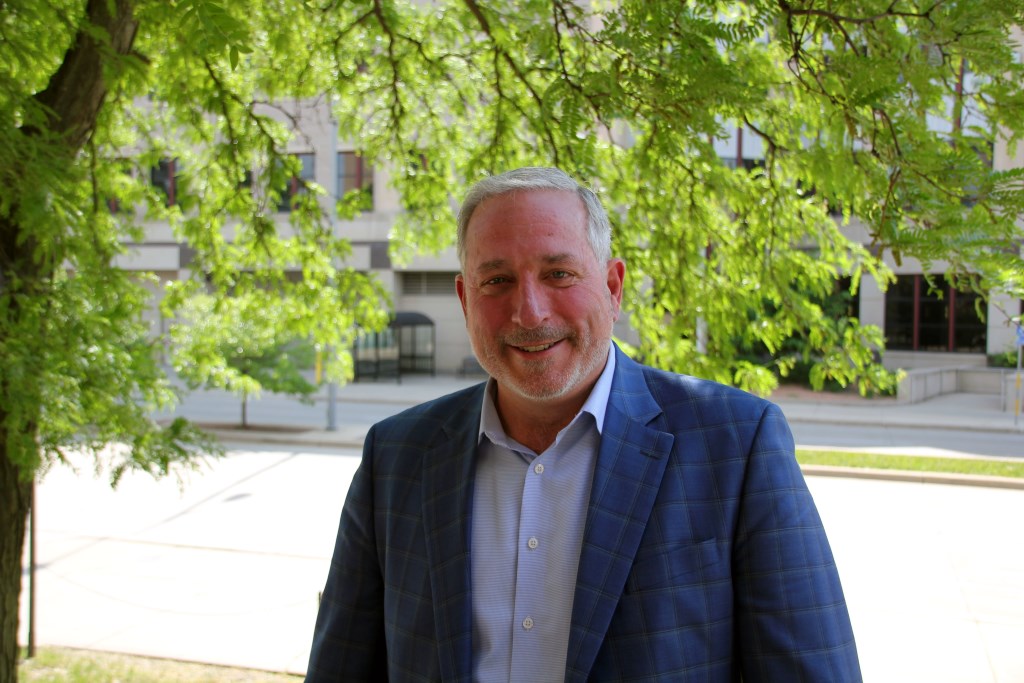 Some campaigns look a little rough around the edges when they launch. Andy Gronik‘s already looked polished.

The Milwaukee businessman had been telegraphing a run for Wisconsin governor since late 2016 through a nonprofit he launched to tour the state, and by last August, he released a web ad that resembled a short film.

Gronik pulls up a seat at donut shop, speaking directly to the camera as piano music builds steadily in the background.

“Business has always made sense to me,” Gronik tells the viewer. “You have a bottom line. You treat your employees like family. You work together to get things done. Or you don’t succeed. It’s pretty simple.”

The six-minute ad includes voters’ stories about health care and schools. It calls for a government that will listen and unite people. It tells the story of Gronik’s kids.

But what it didn’t offer was many specifics about the business background that forms the foundation of Gronik’s campaign to be the state’s chief executive.

From Auctions To Appraisals

Gronik’s video did say he learned about business from his dad, and if you ask him about his background, that’s where he’ll start the story, too.

His father ran an auction business in southeast Wisconsin. From an early age, Gronik said, his father would have him sweep floors and clean equipment.

“I had grown up climbing on machinery, literally degreasing it so that it could be sold,” he recalled.

If Gronik’s dad was selling a company’s equipment, a few things might have happened. The company could be upgrading, or expanding. Or it could be going bankrupt.

Gronik got to know the ins and outs of auctions, and after college, he helped his dad grow the family business. Gronik wanted to expand the business in a new direction, and several years later, he offered to buy it. His dad didn’t like that, and fired him.

“My dad fired me pretty much every month,” Gronik said. “The things that I was suggesting and doing to grow the business were very different than how he had made a living his whole life.”

The auction business depended on being good at understanding what things were worth. Gronik used that knowledge to form an appraisal business in a financial field known as asset-based lending.

It involves riskier companies. They want to borrow money, but they’re not generating enough profit to get a loan from traditional banks.

Gronik would go into these companies and learn everything about them. He’d then share that information with lenders like Richard Solar, who was working at a business called Banker’s Trust when he met Gronk in the early ’80s.

“It turned out that Andy did a lot more than just tell you what the value of the assets were,” said Solar. “You really got behind the scenes and got to understand the companies.”

Armed with more information, Solar could decide whether a company was worth the risk of a loan. He remembers Gronik being credible and candid.

“Even though I might press him — if I wanted to do a deal — I would press him for a certain answer, he would not give me necessarily the answer that I wanted,” Solar said. “He would give me what he believed. He would really be very straight with me.”

Gronik’s said the business required him to get to know arcane details about a lot of different equipment.

“So I always tell people,” Gronik said, “‘If you just spend a moment and look around your room, at anything in the room, chances are pretty good that I’ve seen how every different aspect of what’s in this room that we’re in has been made.'”

Gronik made the boast sitting in a radio studio. Asked for an example, his eyes scanned the room and quickly locked on to the sound board, which is covered with red and green light-up buttons and sliding switches.

But pretty quickly, he caught himself, stopped talking about the sound board and steered the conversation back to politics.

“So I’ll translate that,” Gronik said. “You have Foxconn … this is exactly what the state of Wisconsin should have done with Foxconn.”

The first-time candidate with the polished ads was back on his message.

A Difficult Ending And A New Beginning

While this is all new to Gronik, the political path he’s traveling as an “outsider” candidate is well-worn. It was just four years ago that former Trek executive Mary Burke was the Democratic Party’s “outsider” candidate for governor in Wisconsin. She failed to unseat Republican Gov. Scott Walker, as Gronik hopes to do.

The question is how Democratic voters feel about a business candidate when they have other options in a crowded primary, especially with Republican businessman Donald Trump in the White House.

Nathan Gonzales analyzes campaigns throughout the country for the newsletter “Inside Elections.” He said several primaries around the United States, including Wisconsin’s, will give a better sense of where Democrats stand in 2018.

“Democrats are in the middle of trying to decide whether they want to find outsider candidates of their own or move in a completely opposite direction as a reaction to President Trump and how he’s performed in office,” Gonzales said.

Complicating that decision is the way Gronik’s business career ended.

When Gronik’s family moved into a mold-infested house, it made them sick and brought his Crohn’s disease out of remission. Gronik sued.

“And we fought what we thought was something that was very wrong for over five years,” Gronik said. “I was not willing to stand down.”

While recovering and pursuing the legal fight, Gronik stopped going to work. His ex-business partner sued him, and Gronik eventually sold his share of the business.

But Gronik, 61, said he emerged from the difficult process with a new perspective, and new circumstances.

Gronik had always been too busy with the business to give something like politics serious consideration. That changed when he sold his company.

“I found myself coming off the other end of this very difficult process now able to do it,” Gronik said. “Able to actually try to make the kinds of differences in my community and in my state that I always believed I would if I had the opportunity. And now I did.”

Andy Gronik Navigates Complicated Path From Business To Politics In Run For Governor was originally published by Wisconsin Public Radio.

2 thoughts on “Andy Gronik’s Path From Business To Politics”