Project is a major milestone for the city, Bucks and local bucks. 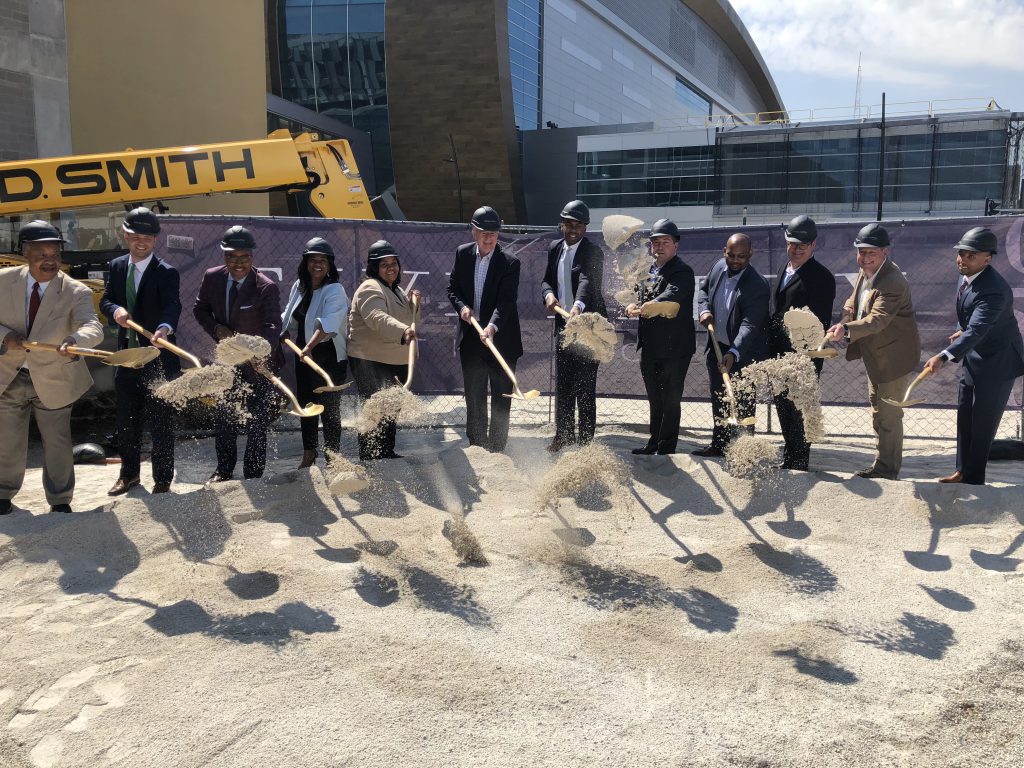 A key piece of the Milwaukee Bucks plan to transform downtown Milwaukee is moving forward, and it has nothing to do with basketball.

The six-story building, originally known as Park 7 Lofts, will include 112 apartments and two first-floor commercial stalls with a combined 13,000 square feet of space. Royal Capital has commitments from two local firms for the spaces but has yet to announce tenants. Amenities in the project include a rooftop deck and fitness center.

Newell, making one of many basketball references used in the ceremony, told the audience “none of this comes together without great, talented teammates.” He thanked the Bucks for selecting his firm’s proposal from the many submitted for the site. Among the other “teammates” Newell thanked were his coworkers, Engberg Anderson Architects for the project’s design, CD Smith for the building’s construction, finance firm Walker & Dunlop for the project’s financing, Donsia Strong Hill of LISC and Carla Cross for coordinating the construction participation of disadvantaged firms and unemployed city residents.

Bucks president Peter Feigin praised Newell in his brief remarks. Feigin, who has grown quite adept at describing a vision for an active neighborhood around the new arena, noted that the project is a key piece of creating “a vibrant, diverse place in the middle of the city where there was nothing.” A firm affiliated with the Bucks is an investor in the project.

Mayor Tom Barrett likewise joined in praising Newell and complimented the Bucks on fulfilling their promises to the city. He added that he is proud the project will comply with hiring targets for unemployed or underemployed city residents and city-certified small business enterprises. The city was able to mandate the hiring practices because the arena district development, in particular the parking garage that the apartments will cover, is funded with a city-created tax-incremental financing district. “We are more connected to this project than nearly any other project,” joked Barrett.

“This new area will not only be a place for people to play, for people to work, but for people to live. Can you imagine having an arena in your backyard?” asked area Alderwoman Milele A. Coggs in her remarks.

Coggs raised a sobering point during her remarks as well. The Five Fifty project will only be the second downtown building owned by an African-American developer. The other is the recently completed redevelopment of the Germania Building by Kalan Haywood‘s firm Haywood Group and Cardinal Capital Management.

In an interview after the ceremony, Newell said that early plans to include affordable housing in the development haven’t come to fruition yet, but that it’s something his firm is always exploring.

The developer says his firm is re-evaluating aspects of their The Hills Luxury Commons proposal for Brewers Hill due a softening in the market, but still hopes to break ground this year on the proposal.

The firm is moving full speed ahead on the Mill Road Library redevelopment. A groundbreaking for that mixed-use project, located at 7717 W. Good Hope Rd., is expected in the coming weeks.