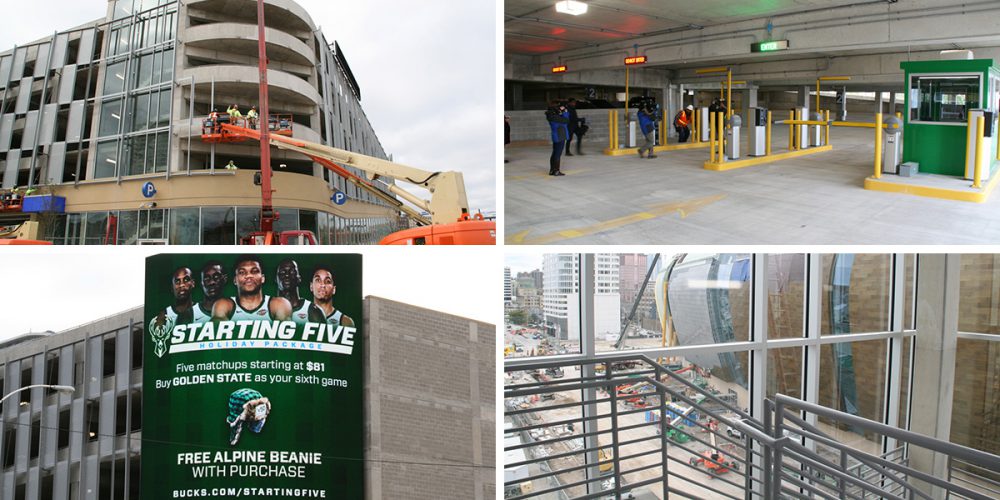 Starting tomorrow another building in the massive Milwaukee Bucks arena complex will open. This new 1,243-stall parking garage, however, is different in that it’s a public-private partnership of the team and the City of Milwaukee.

The $47 million garage, which is being built in part with $35 million from a city tax-incremental financing district, will be directly connected to the new arena via a skywalk on the garage’s third level. Suite and club ticket holders will have access to the skywalk, while others will join the approximately 80 percent of ticket holders who are expected to enter through the Wisconsin Entertainment & Sports Center’s front door along N. 4th St.

Vehicles will enter the garage from the newly-constructed N. 4th St. between W. McKinley and W. Juneau avenues. Bicycles can similarly enter along N. 5th St.; the structure includes covered parking for approximately 55 bicycles or scooters.

Drivers coming from the west won’t have any problem finding the garage. A 1,250 square-foot, four-story tall video board wraps the garages northwest corner at N. 6th St. and W. McKinley Ave. The team uses the video board to display information about upcoming events and offerings, but is restricted from having moving images on the board. Translation: Don’t expect to see Giannis Antetokounmpo dunking over LeBron James as you exit Interstate 43  (though we certainly hope for this happening in live action).

For the Bucks, one of the biggest selling points for the garage will be how fast and easily one can exit after a game. When completely full the Bucks are projecting that the garage will empty within 30 minutes, a 15 to 30 minute improvement over similarly sized garages.

What makes so much faster? There isn’t one silver bullet according to Mike Abrams of ICON Venue Group. Instead, it’s a number of design tweaks adding up to a better experience. A key one is that the garage features up to four reversible lanes, which allows cars to exit from every gate. In addition, the garage uses speed ramps that are parking-free between floors and allows garage users to pay in advance.

And while the garage can be emptied quickly, the design of the facility also anticipates filling it more smoothly. Vehicles won’t encounter the parking gates until they get to the second floor, which will allow vehicles to queue up in the building instead of blocking N. 5th St. and W. McKinley Ave.

The roof of the garage, which features great skyline views and spaces for 150 vehicles, will be available for those who want to tailgate. While Bucks chief marketing officer Dustin Godsey said the team would like to create an “urban tailgating experience.”

The identification system for the floors is designed to make many driving to the game from across Wisconsin feel a bit closer to home. Yes, they’re numbered, but each floor is also named after a Wisconsin city (Milwaukee, Green Bay, La Crosse, Eau Claire, Oshkosh and Madison) and contains iconic imagery from that city. It’s a subtle touch that makes a utilitarian structure seem more inviting and also reflects the owners’ hope they can increase the team’s statewide fan base.

Another notable improvement over other garages are the stairways. While a bay of elevators is available, thousands of people will take the stairs and won’t feel like second-class citizens, because the stairways are lined with floor-to-ceiling windows that bring in lots of light and afford great views of the new arena. 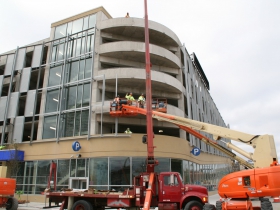 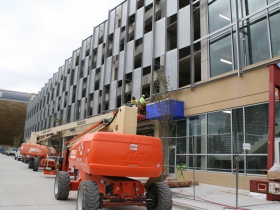 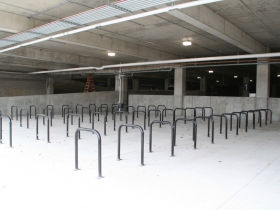 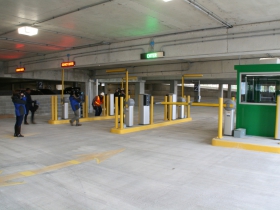 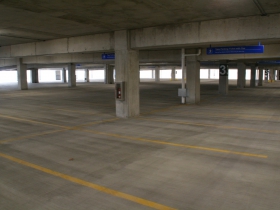 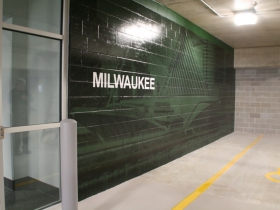 Open to the Public

Publicly-available monthly parking is available in the garage, with rates starting at $125 a month. That rate excludes event parking (access only from 5 a.m. to 5:30 p.m. parking), which means you can’t use the garage while the Bucks are playing. All-access parking is $250 per month.

During a tour of the garage Godsey stated, “we want to have the most secure parking structure you can find in downtown Milwaukee.” To achieve that the team has installed a number of cameras in the garage, as well as motion-activated LED lighting. In addition, the stairwells are all lined with glass.

Canadian-based parking giant Impark will operate the garage for the Bucks.

Along the first-floor the six-level garage is wrapped on two sides by commercial space. The south and north sides of the garage contain a combined 23,226 square feet of gray box space awaiting a future build out. The Bucks have not announced any tenants for those spaces yet.

The upper floors of the garage are wrapped in perforated metal panels, which attempt to shield the massive concrete structure. The west side of the garage is currently a blank wall, but will eventually be covered by an apartment building.

Royal Capital Group, in partnership with the team, will construct the 107-unit Park 7 Lofts apartment building on the west side of the building along N. 6th St. That triangular-shaped building contains no parking and will rely on the attached garage.

The garage was designed by GRAEF and American Design Incorporated. Construction on the garage was led by J.H. Findorff & Son, Inc.

Similar to the arena, the parking structure was subject to the requirement that 40 percent of the project be completed by unemployed or under-employed city residents certified as part of the city’s Residents Preference Program.

The Bucks and the city will split revenue from the structure evenly after costs of operation and maintenance are deducted. This includes a potential naming rights deal for the structure.

The city contribution for the garage comes from two tax-incremental financing districts. The city is contributing $27 million from the Beerline B TIF district, as the structure is within a half-mile of the district’s borders. In addition, the Bucks are leveraging a developer-financed $8 million contribution via the West McKinley and West Juneau TIF district.

The developer financed portion, in which the team advances the money to the city and the city invests it in the project, places the team’s real estate affiliate at risk. The team recovers their funds via property tax payments on projects within the district. That $20 million district (an additional $12 million is going towards the plaza) is expected to be paid off in 2041.

The parking structure was necessitated in part because the team was given and then demolished the former 4th and Highland Parking Structure as part of the development of the privately-financed Live Block entertainment center. All of these moving parts were contemplated as part of the term sheet agreed to in 2015 between the team and city.