By Laurel White, Wisconsin Public Radio - May 14th, 2018 02:23 pm
Get a daily rundown of the top stories on Urban Milwaukee 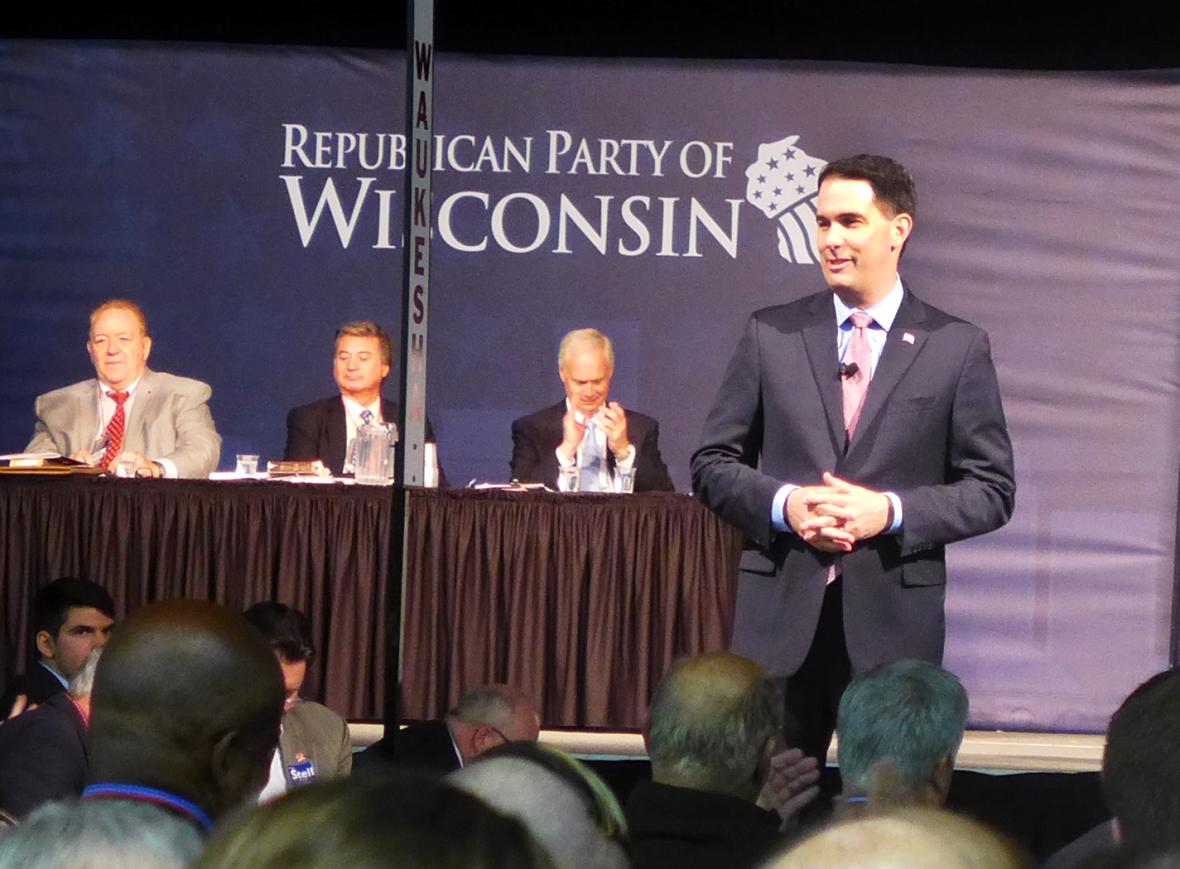 Gov. Scott Walker speaks during the Republican Party of Wisconsin’s convention Saturday, May 12, 2018 in Milwaukee. Photo by Laurel White/WPR.

Gov. Scott Walker and other state GOP leaders warned conservative voters Saturday of an impending “blue wave” in the fall general election, urging members of the party to mobilize before November.

Republicans gathered in Milwaukee for the annual state party convention over the weekend, where Walker gave a speech touting his gubernatorial campaign.

Walker used his speech to warn GOP voters of the importance of the fall election in light of recent surprise Democratic victories in the state and across the country.

“We need to wake up,” he said. “This election is going to be tougher than any we’ve faced so far and the consequences are greater than ever.”

In April, Democrat-backed state Supreme Court candidate Rebecca Dallet defeated her opponent, who was backed by Republicans in the officially nonpartisan race, by 12 points. In January, a Democrat won a state Senate special election in a district President Donald Trump won by 17 points in 2016.

Across the country, Democrats have also won surprise victories this year in Alabama, Florida, and Pennsylvania.

Walker warned a “blue wave” could wipe out Republicans’ historically large majorities in the state Legislature and roll back GOP-backed changes to voter identification laws, tax breaks for manufacturers, and the state welfare system.

“We’ve shown the world that common-sense, conservative reforms work — but that could all go away in one election,” Walker said.

Democrats were quick to weigh in on Walker’s remarks, arguing he is “in a panic” as the fall approaches.

U.S. House Speaker Paul Ryan spoke Saturday afternoon at the state convention for the last time as speaker of the house.

Ryan announced in April he will not seek another term representing Wisconsin’s 1st Congressional District, which he has done for nearly two decades.

In his remarks, the speaker focused more on his accomplishments in office than the potentially tough election cycle ahead. He touted Republican-backed laws that have moved through Congress since President Donald Trump’s election in 2016.

“We have done so much in such a short a time,” Ryan said.

Those accomplishments include rolling back a number of regulations put in place by the Affordable Care Act and the high-profile package of tax changes passed late last year.

“I just want to say thank you,” Ryan said to the crowd of Wisconsin Republicans. “We have done so much together for so long.”

Ryan will continue serving in Congress until November.

GOP leaders in the state Legislature took to the convention stage to offer their accomplishments over the past several years as a barrier to Democratic victories in the fall.

“That blue wave is about to crash into the red wall,” said Senate Majority Leader Scott Fitzgerald, R-Juneau.

Fitzgerald touted new laws on guns and abortion and predicted “MSNBC hosts are going to be crying on screen” after the fall elections.

“Freedom is on the line,” Vos said.

Delegates chose to give the party’s official support to Vukmir over former Marine Kevin Nicholson.

Nicholson has criticized Vukmir for being an “establishment Republican,” arguing he would bring a political outsider’s perspective to Washington. He has also downplayed the importance of the party endorsement.

Vukmir and Nicholson will face each other in August’s partisan primary. The winner of that race will face incumbent Democratic U.S. Sen. Tammy Baldwin in November.