About That Deficit, Sen. Johnson

Debt was Ron Johnson’s obsession -- until he helped Trump create the biggest deficit in 75 years. 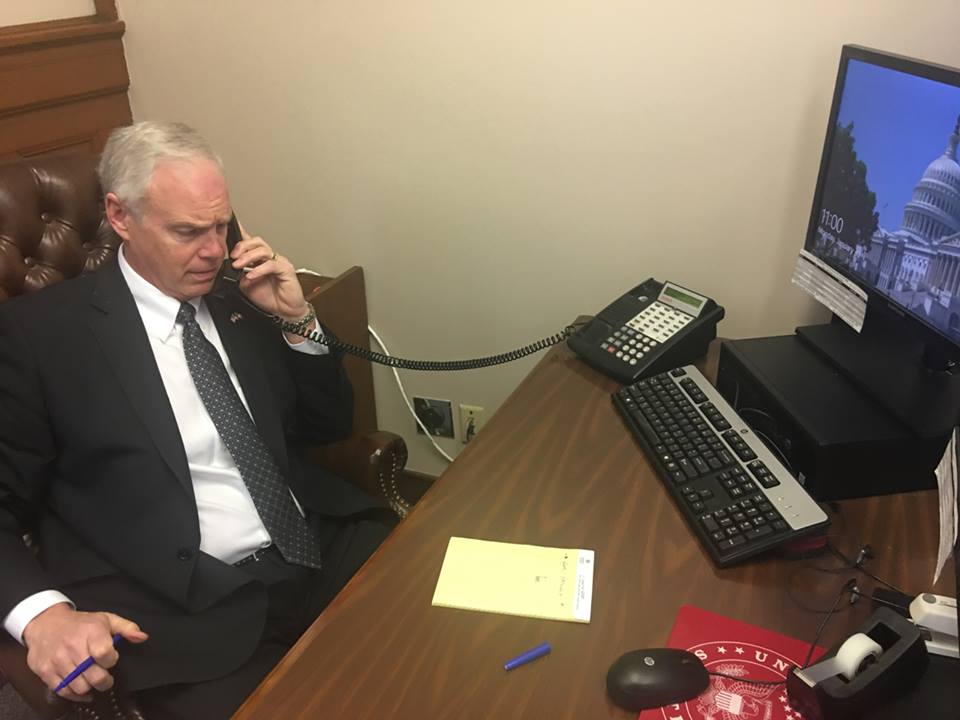 Ron Johnson was a self-proclaimed “citizen legislator” who decided to run for the U.S. Senate in 2010. He was Mr. Smith going to Washington, the political neophyte who would bring purity to politics. “There are people like me,” he told conservative talk radio host Vicki McKenna, “that got elected in 2010 that actually have a backbone. And we’re just trying to do as much as we possibly can to inject that spine into the rest of Washington to make a stand.”

And the stand that needed to be taken was on the federal deficit. His “first task is to save our nation from bankruptcy,” he soberly explained. America’s freedom is being threatened by “unsustainable levels of spending and debt.”

“What you’re going to hear me ask, in hearing after hearing, is what’s a debt crisis going to look like for an average individual?” Johnson told the Journal Sentinel. “I’m not trying to scare people. I wish we weren’t in this situation.” He warned of possible Greece-like riots in America over the deficit. “That’s what’s ahead of us!”

He was a businessman who would bring fiscal discipline to Washington. The sad truth was that most people in government are well-intentioned but just not good with numbers, he noted in a speech to the Aspen Institute. “Washington D.C. doesn’t have an ideology problem; it has a math problem,” was his message to the Superior Telegram not long after he was first elected. “We’re bankrupting America,” he told the Green Bay Press Gazette. “The United States Senate hasn’t done anything to address that fact” and the economy “is in a coma” because of this.

Johnson became Washington’s premier deficit scold, with endless charts on America’s debt and a Power-Point presentation he foisted on members of both parties. His predecessor, Democratic U.S. Senator Russ Feingold, had been famous for his listening sessions in every county. Johnson turned those into lectures on the deficit.

“Both privately and publicly, the senator talked about only Obamacare and the debt and deficit—issues that, while important to Republicans, represented only a few of the issues that confront a senator daily,” a 2015 story in the National Journal noted. “Some Republican leaders reported hearing the same presentation on the subjects—delivered via PowerPoint—three times.”

Mark Graul, a long-time Republican strategist in Wisconsin, told the publication that Johnson was “so hyperfocused” on the debt that he “did have a little bit of blinders on” and missed some of the other things that he should have been paying attention to…You can walk and chew gum at the same time.”

It is striking to read through Johnson’s press releases from his first few years in office. “Our country is going bankrupt, we shouldn’t be going home on a holiday,” Johnson (R., Wis.) said at a press conference in 2011 condemning the Senate’s vacation over the July 4th weekend.

“We must break the cycle of Washington’s business as usual that is bankrupting America,” he thundered in his July 27, 2011 “Statement on Continuing Debt Crisis.”

“Simply put, we are committing intergenerational theft,” he charged in his Nov 16, 2011 press release. “It is immoral and it needs to stop.”

Over and over he vilified Obama for his lack of leadership. “the Obama administration is leading America down the path of economic disaster,” he warned in a September 4, 2012 press release about the deficit.

“America and its future generations suffered a loss today,” he eulogized in his October 16, 2013 statement on a new debt ceiling deal, and Obama proved he is “more than willing to increase the debt burden on our children and grandchildren.”

Month after month the drum beat continued, relentlessly pounding his message of deficit doom. And then, about three years into his first term, Johnson began to speak less of the deficit and more of all those other issues Graul noted. Mr. Deficit was learning to walk and chew gum at the same time. “Him moving away from the PowerPoint presentation probably allows him to connect more with voters,” as Kurt Bauer, president and CEO of the Wisconsin Manufacturers & Commerce, told the National Journal.

Still, it remained a key issue for Johnson — until Republican Donald Trump became president. Obama had inherited the worst recession since the Great Depression, with falling tax receipts and a need for fiscal stimulus to prevent a total meltdown of the economy. Trump had inherited an economy with low unemployment and robust jobs growth, but showed no interest in reducing the deficit. Yet there were no dire press releases with Cassandra-like warnings from Wisconsin’s prophet of deficit doom.

Worse, the man who frequently argued that American needed to think 30 years ahead on budgeting, offered no criticism of the proposed Trump tax plan’s longterm impact on the deficit and his vote helped assure its passage.

“The number one component of a solution to many of America’s problems is robust economic growth” his press release hailing the bill’s passage noted. “Passing pro-growth tax reform that allows American business to compete globally is a necessary step. No major piece of legislation is ever perfect, but this bill is a significant improvement over our current tax system.”

But whatever the impact on the economy, the tax breaks passed are so massive they assure historic deficits.  As Reuters reported: “The national debt is on track to approach 100 percent of gross domestic product (GDP) by 2028, said the nonpartisan CBO, which analyzes legislation for Congress. ‘That amount is far greater than the debt in any year since just after World War II,’ CBO said.” It forecast a cumulative deficit of $11.7 trillion for 2018-2027.

As for the idea the economy would improve, Johnson has insisted for the last eight years that a high deficit is terribly injurious to the American economy. “Major damage was done” to the economy by the tax plan, as the fiscally conservative Peter G. Peterson Foundation noted of the deficit that is being created.

As for the idea the huge giveaway to corporations would cause companies to expand operations or hike wages, there is not much evidence of that. Even before the plan was passed, companies had predicted the giveaway would result in more stock buybacks, mergers and acquisitions, which is exactly what has happened.

Johnson has also touted “regulatory reform” under Trump, suggesting it has led to a 3 percent rate of GDP growth in recent quarters, which can help solve the deficit problem. He is presumably referring to the second and third quarters of 2017, which were awfully early in Trump’s tenure to credit to the little he had accomplished by then, and are in any event well behind the highest quarters under Obama — 4.6 percent and 5.2 percent in 2014.

Johnson, by the way, did have one objection to the tax plan, the fact that it didn’t provide a tax break to “pass-through” companies — businesses whose profits are distributed to their owners and taxed at rates for individuals. Johnson succeeded in getting a tax break for these entities. As it happens, Johnson’s family-run plastics manufacturing business is one of the beneficiaries.

So the bad news for someone with Johnson’s world view is the deficit will soon be far higher as a percent of the GDP then when he claimed it was destroying our nation. But the good news is along with all the bigger corporations in America, Johnson’s company benefitted from the massive tax breaks that were passed.

18 thoughts on “Murphy’s Law: About That Deficit, Sen. Johnson”