By Jon Peacock, Wisconsin Budget Project - May 4th, 2018 11:29 am
Get a daily rundown of the top stories on Urban Milwaukee 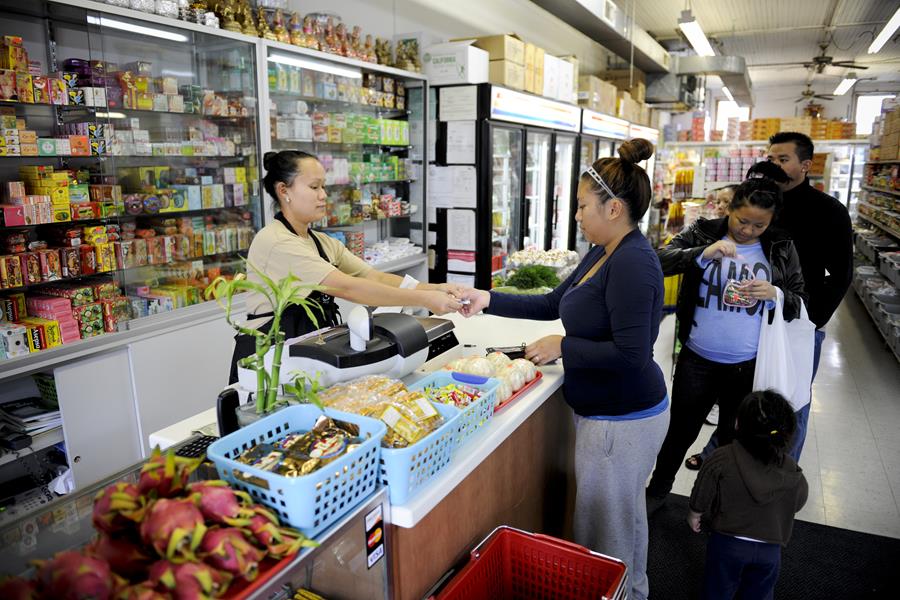 The Asian International Market is a locally owned small business that provides healthy food options to residents on Milwaukee’s south side. Photo courtesy of LISC.

Congress is expected to vote sometime this month on a bill that will leave millions of children and families hungry. Passage of the Farm Bill (H.R. 2) would cause an estimated 2 million Americans to lose food stamp benefits and threaten the health and well-being of Wisconsin’s children, families, and communities. Coming on the heels of tax legislation that provides a massive windfall for wealthy individuals and large corporations, this change would take resources away from working families and make it harder for parents to put food on the table for their children.

Wisconsin Republicans should strongly oppose this legislation because one of the major changes in the bill will create a substantial benefit cliff, which is something that Governor Scott Walker and legislators of both parties have repeatedly said we should avoid.

This particular change, which is one of several very harmful parts of the Farm Bill, will substantially reduce the number of people eligible for food stamp benefits in Wisconsin and will significantly increase financial hardship for many low-wage workers and their dependents. It does this by capping eligibility for the Supplemental Nutrition Assistance Program (SNAP) at 130% of the federal poverty level and eliminating the ability of states to structure eligibility so people don’t abruptly lose their benefits when their income rises above the cap. (SNAP is the official title for the federal program that is commonly referred to as food stamps, and in Wisconsin, the program is called FoodShare).

According to a new memo from the nonpartisan Legislative Fiscal Bureau, this specific change (which will not apply to the elderly and people with disabilities) will have the following effects in Wisconsin:

The proposal to cap SNAP eligibility for most recipients at 130% of the poverty level comes as a big surprise because many prominent lawmakers from Wisconsin—including Speaker Paul Ryan, Governor Walker and State Senator Alberta Darling—have stated repeatedly over the last several years that public assistance programs should be designed to avoid eligibility cliffs that make recipients lose a significant amount of benefits when they have a small increase in their earnings. As Senator Darling said early last year: “I’ve talked to employers who had great employees turn down professional opportunities because the raise won’t cover the loss of benefits from public assistance.”

Benefit cliffs haven’t generally been as large a problem as some lawmakers have suggested—thanks to the fact that most benefit programs, including SNAP, phase down benefits gradually as income goes up. Unfortunately, the Farm Bill unveiled by the chair of the House Agriculture Committee will change that feature of SNAP, thereby creating the sort of benefit cliff that Wisconsin Republicans have been railing against.

The Farm Bill also contains a number of other changes that will significantly increase hunger by impeding access to SNAP benefits. For example, it will make it easier for states to impose work requirements that have the effect of taking critical SNAP benefits away from people who are unable to find work or to get enough hours. The bill provides a modest increase in funding for work programs, but only a tiny sliver of what will be needed to provide employment to the people who are subject to work requirements and unable to find unsubsidized jobs.

The proposed changes will hurt low-income urban areas, including communities of color, but it will have even greater effects in many rural areas, which have been slow to recover from the Great Recession. Residents of rural areas are about 25% more likely to receive SNAP benefits than urban households.

Some people argue that the proposed changes will promote work, but we think the bill will have just the opposite effect. SNAP and BadgerCare are critical work support programs. Reducing eligibility for those programs means that some of the adults now served will not be as healthy and are less likely to maintain their employment, and their children won’t be able to perform as well in school—which will hurt our future workforce. In addition, because the Farm Bill will create a sharp benefit cliff, it will cause a strong disincentive for low-wage workers to increase their hours or take a promotion. That’s exactly what many Republican leaders in Wisconsin have been saying public assistance programs should not do.