EPA head overrules his own staff to deliver victory for Walker and Trump. 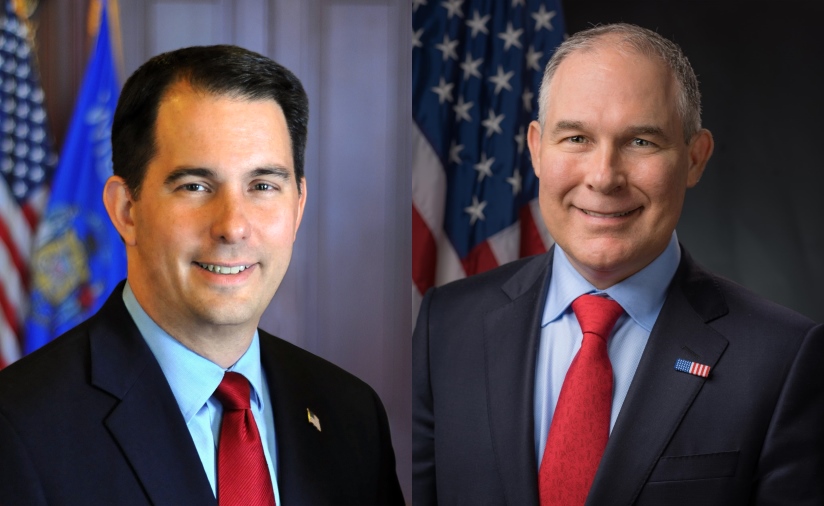 The Chicago Tribune called it “a political victory” for Gov. Scott Walker and a ruling that “will save Foxconn from having to make expensive improvements” in its planned manufacturing plant in Racine to meet previous federal standards for air pollution.

Those costly upgrades won’t be needed because President Donald Trump’s EPA Administrator Scott Pruitt overruled his agency’s career staff, the Tribune reported, and “dramatically” reduced “the size of the areas required to crack down on smog” in Wisconsin, Illinois and Indiana.

“The areas removed from the list were suggested by Republican elected officials,” including Walker, who has made a new plant by the Taiwanese company Foxconn “the centerpiece of his re-election campaign,” the story noted.

The issue “had acquired political overtones both because of Walker’s concerns and because President Trump, who owes his surprise 2016 election victory in part to Wisconsin voters, has touted the Foxconn project,” noted the E&E News, which covers energy and environmental issues.

In a Twitter post, Walker declared: “We are working with the EPA to implement a plan that continues to look out for the best interest of Wisconsin.”

In fact, the result of this decision will be more ozone, which causes, contributes to, or exacerbates a number of respiratory problems including asthma, emphysema, chronic bronchitis, and chronic obstructive pulmonary disease. That has huge health consequences. “In 2011, a peer-reviewed EPA study found that reductions in smog and fine particle pollution prevented more than 160,000 early deaths, 130,000 heart attacks and millions of asthma cases nationwide during 2010 alone,” a February story by the Tribune story reported.

To address this problem a scientific review is required every five years by the federal Clean Air Act, and “the Obama EPA tightened the national smog standard in 2015 to 70 parts per billion, down from the 75 ppb limit set during the Bush administration,” the Tribune reported. “Average smog concentrations in all of the Wisconsin areas initially targeted by the EPA exceeded the new federal limit during the past three years, according to state monitoring data. Smog levels peaked at 83 ppb last year in Racine County and averaged 75 ppb between 2015 and 2017.”

But that already high level of smog will increase significantly due to the planned Foxconn manufacturing complex. “The four facilities, to be built in phases over the next several years, could combine to emit 229 tons per year of nitrogen oxides, 240 tons of carbon monoxide, 52 tons of particulate matter, 4 tons of sulfur dioxide and 275 tons of volatile organic compounds,” the Biz Times reported. “Among southeastern Wisconsin manufacturers, Foxconn’s permit applications would allow it to be the top emitter of nitrogen oxides and volatile organic compounds, based on a review of 2016 DNR data.”

If Pruitt had followed the EPA staff report,” the Tribune reported, “Foxconn and other industrial sources of smog-forming pollution in Racine County would have been required to install more effective pollution-control equipment, scale back production or broker costly emissions-trading agreements with cleaner facilities.”

Pruitt’s ruling “was a shift from the EPA’s stance in December when it determined a much broader area of southeastern Wisconsin failed to meet ozone standards,” the Journal Sentinel reported. “At that time, the EPA declared Milwaukee, Waukesha, Ozaukee, Washington and Racine counties in violation.” But the new ruling declares that only a thin strip of land along the lakefront from Kenosha County north through Milwaukee, Ozaukee, Sheboygan and Manitowoc counties is now in violation. The vast majority of those counties is no longer in violation while 100 percent of Racine County is declared as not in violation.

The idea of designating only these tiny strips of land as violators of the EPA standard makes no sense, as Dona Wininsky of the American Lung Association in Wisconsin told the Journal Sentinel: “Maybe if air pollution stayed in nice little places, that would work. But these narrow designations don’t really take into account the people who live in these areas, or nearby.”

In arguing for exempting Wisconsin from EPA standards, Walker blamed Chicago for making the air unhealthy to breathe in parts of Wisconsin. The Wisconsin Department of Natural Resources, which has become aggressively pro-business under Walker’s leadership, cited data showing that 81 percent of all nitrogen oxides and 79 percent of all volatile organic compounds in southeastern Wisconsin come from the Chicago area, the JS noted.

Environmental groups, however, have predicted Pruitt’s ruling won’t survive a court challenge. “This is another ridiculous attempt by Scott Pruitt and the Trump administration to violate the law,” John Walke, a former EPA attorney who is now with the nonprofit Natural Resources Defense Council, said to the Tribune. “We are looking forward to seeing them in court again.”

Trump picked Pruitt as EPA head to dismantle industry regulations created under President Obama, but “those rules took time and significant research to implement and are just as difficult to reverse,” a recent editorial by USA Today noted. “And Pruitt hasn’t shown the discipline or detail work to do it. Courts have struck down six of his efforts to delay or roll back Obama regulations.”

The editorial by the normally staid national newspaper called Pruitt “an ethical train wreck” whose “relatively brief tenure as EPA administrator has already spawned no fewer than 11 federal inquiries,” and urge Trump to find someone “who isn’t weighed down with Pruitt’s over-the-limit amount of ethical baggage” to serve as EPA administrator.

But Trump has repeatedly defended Pruitt, saying he likes the results under the EPA leader. So does Walker.

16 thoughts on “Back in the News: Pruitt Ruling Allows Foxconn Pollution”