The Endless Corruption of Scott Pruitt

The only thing worse than EPA leader’s ethics is his environmental record. 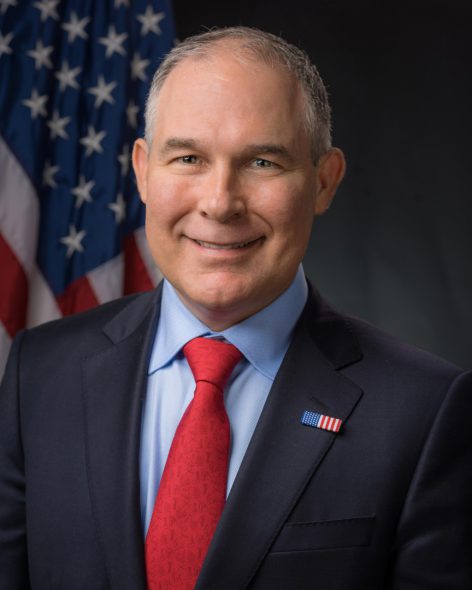 Scott Pruitt. Photo is in the Public Domain.

It’s certainly ironic that someone who is working feverishly to destroy America’s wetlands has himself created a vast ethical swamp. That’s Scott Pruitt, Trump’s appointee to head the Environmental Protection Agency. While Scott Pruitt’s corrupt behavior is outrageous, the real scandal is what he is doing to the environment he is supposed to protect.

The ethical transgressions that Pruitt has managed to rack up during his tenure at the EPA are so numerous, newspapers may run out of ink just listing them all. In violation of both federal law and agency rules, he’s been living high on the hog at taxpayers’ expense. On your dime, Pruitt has been flying first class, staying at luxury hotels, and living it up in Paris, all the time attended to by a massive entourage. He even wanted to spend $70,000 to replace two desks in his office. He has hired and given unauthorized and extravagant raises to political cronies.

The only break for taxpayers is when Pruitt has decided for a change to mooch off lobbyists whose businesses he is supposed to regulate. For example, the family of a gas company lobbyist whose corporate client received Pruitt’s approval for a controversial pipeline rented Pruitt fancy Capitol Hill digs for only $50 a night. Try getting a room at Trump’s D.C. hotel for even ten times that amount.

Even worse, he has penalized EPA employees who have the temerity to voice displeasure at his wasteful ways. The NY Times reports “At least five officials at the Environmental Protection Agency were reassigned or demoted in the past year after they raised concerns about the spending and management of Scott Pruitt.” One employee who refused to go along with Pruitt’s desire for a full time private jet got the axe. A long time EPA security officer was demoted for objecting to Pruitt’s demand that he use emergency lights and sirens to get to dinner at a fancy D.C. restaurant.

While Pruitt is wasting our tax dollars on his self-indulgent excesses, he has been laying waste to the safeguards that have kept our air clean and our water drinkable. While the list of Pruitt’s ethical abuses is long, the list of rollbacks of environmental protection is much longer.

Before Trump put him in charge of the EPA, Pruitt was Attorney General of Oklahoma. In that position, he was one of the most aggressive opponents of clean air and water rules administered by EPA. He sued the EPA 14 times to try to kill safeguards on toxins and other pollutants. He received over $300,000 in campaign contributions from oil and gas execs and returned the favor by ignoring severe pollution by those companies in Oklahoma.

As EPA administrator, he is attempting to roll back dozens of rules that protect our environment. The number of pollution control measures Pruitt is seeking to kill is staggering. That list includes fuel efficiency requirements for cars, pollution standards for sewage treatment plants, limits on industrial air pollution, the Clean Power Plan, restrictions on toxic discharge from power plants into public waterways, controls on the dumping of coal ash waste in rivers and streams, emissions standards for semis, protection for our National Parks from air pollution, protection for wetlands, limits on methane for oil and gas drilling, limits on mercury pollution, safety rules for facilities that use hazardous chemicals, ground water protection from uranium mines, and a ban on a pesticide derived from nerve gas that causes neurological damage in children.

To date, Trump has refused to fire Pruitt. Perhaps Pruitt fits right in with a scandal ridden administration that bends over backwards for polluters.

6 thoughts on “Op Ed: The Endless Corruption of Scott Pruitt”